EOS prices have so far stagnated below $9, failing to rise to the psychological $10 level despite repeated attempts by buyers.

The days of the Mainnet confusion appear to be receding fast, but prices just can’t rally to new highs at the moment.

After the initial optimism in the entire market last week, this week began with EOS taking a plunge, past the $8.00 support levels.

EOS is having one of those bad days in the market as its prices take a tumble to trade at 15 percent lower than its value a day ago.

The coin has also dropped in value against BTC and ETH. Its prices against the top two are trending at -10 percent and -6 percent respectively over the last 24 hours.

These losses mean that EOS is now trading at 23 percent in the red this week.

Even though a majority of the top 10 coins are trending towards a bearish outlook, EOS’ decline is more pronounced, given the coin gained over 7 percent against the US dollar a day earlier.

Here is how the EOS intraday charts appeared during the early Asian hours. 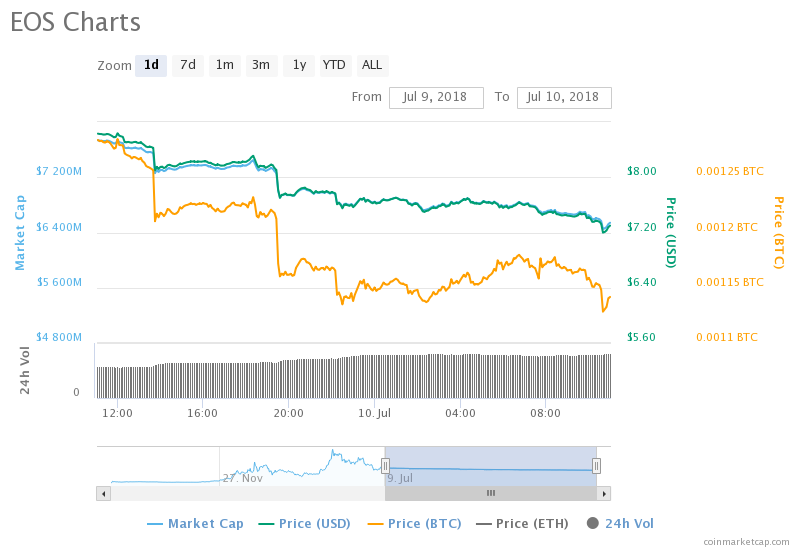 EOS/USD prices took a rather sharp tumble, falling from $8.51 to trade at $7.61. A series of lower lows means that the prices declined even further, threatening to dip lower if the trend continues.

The coin is currently trading at around $7.51 against the USD, losing about $1 since the drop began late on July 9.

If we put today’s prices into perspective, it translates to a month-long decline of about 43 percent. EOS traded at a high of $14.39 against the US dollar on June 9th.

However, its prices have been declining ever since, following a chaotic mainnet launch that has yet to see the platform settle into any sort of smooth operations.

In terms of its performance over the tail end of Q2, this ranks as its worst one-day price decline since June 22.

Compared to its all-time high price set at the end of April, EOS has dropped by nearly 66 percent. By then, EOS traded at $22.98 against the USD.

The EOS coin has stayed within a descending channel, and could see further downs in the coming days should the market continues to teeter.

Other market indicators also show a decline over the last 24 hours. The coin’s market cap has shrunk to about $6.7 billion, down from about $7.8 billion the previous day.

Yet overall, the market cap has shrunk by over 50 percent since it hit a high value over $17 billion in Q2.

Trading volume too has tanked, dropping from over $1 billion traded a few days ago to about $816 million in the last one day.

However, the intraday trading volume has increased from $707 million on July 9.

The latest drop in prices could be a market-wide reaction, but there’s every indication that the crypto community could be reacting to the circumstances surrounding Block Producers and RAM costs for the 5th ranked coin.

It’s been kind of a rollercoaster for EOS, which seems to have one event after the other, week in week out.

Other than this week that hasn’t served any spicy news from the fledgling cryptocurrency, we only need to go back to the weekend to find an example of how tumultuous it has been.

Block.one, the software developers for the EOS ecosystem came onto the scene and undertook to help select block producers.

It has been observed that the EOS team controls about 10 percent of all the tokens.

What this means is that the team has immense power, given even the most powerful BPs have about 3 percent of the tokens under their control.

The issue of having the best candidates for block producers continues to hold a lot of significance for the EOS platform.

It’s one of the areas that could have potential weaknesses, affecting the central concern for a decentralized blockchain. It’ll all come down to how the EOS team chooses to exercise their power.

Last weekend, EOS New York, among the top EOS block producers, posted on Twitter that it had established the reason behind the wide crash among the BPs.

It said that most of them had crashed due to what it called RAM-related issues.

It has since been established that when RAM usage clocked over 1GB, many nodes run by a number of block producers couldn’t work.

It was even starker, given that these block producers had an agreement to ensure that they have support for a RAM limit of about 64GB.

Earlier, the leading BP posted that:

“Some Block Producers crashed when RAM usage on EOS exceeded 1GB tonight. Either they only had 1GB or they did not configure their node to properly set it at 64GB. This is a violation of the regproducer agreement. EOS New York produced on schedule. We are still confirming details”

However, further investigations have now shown that the failure wasn’t a violation of the regproducer agreement, but a result of many of the BPs failing to perform the correct configurations.

Quite encouraging, however, is the fact that the RAM marketplace is settling after prices dropped by half.

At the height of the RAM fiasco, costs had risen to about 0.9 EOS (roughly $8) per kilobyte.

It had looked like it would turn the whole thing into a race for the highest bidder has it all. The current cost has however dropped to around 0.44 EOS ($3.95) per kilobyte.

The reduction in the cost of RAM may be a great step for those interested in developing and deploying dApps on the platform.

A full utilization of the platform for dApps is what is believed to set it apart from the rest as well as put it on course to challenge Ethereum.

EOS is still a very attractive project and it appears the future in terms of its token price will be brighter. More and more exchanges are adding EOS for trading.

Currently, a majority of the liquidity is in USDT, but USD and KRW are also playing a big role in its quest for high accessibility and availability.

And thus, the popularity of the platform has seen predictions put its value around $30 by end of 2018.

Even if that doesn’t materialize for one reason or the other, it’s likely that EOS will hit its all-time high price this year.

It may come down to a general boom in the crypto industry, and if sentiment heads north, the expectation is an exponential rise in value will follow.