These are not the brightest times for Dash (DASH) in the market.

The bears have seized control over the cryptocurrency for a long time now, with successive daily value declines. The current value of DASH is a poor reflection of what it was when this calendar year began. 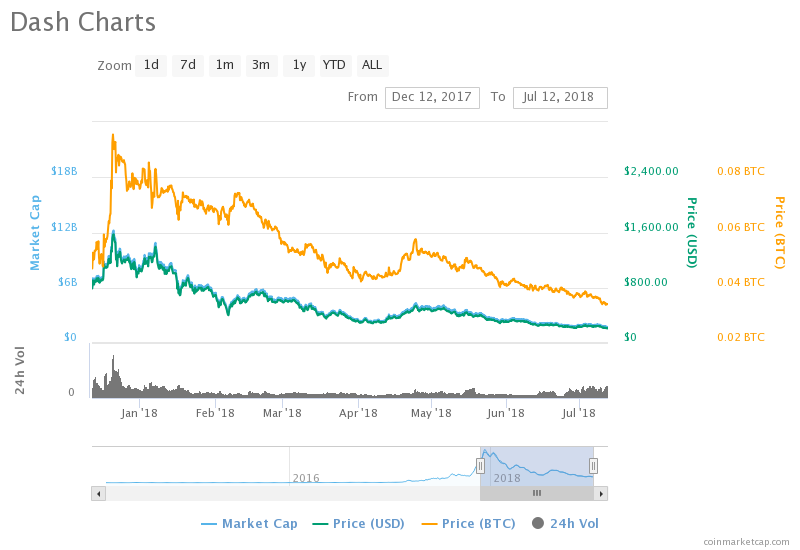 Over the last 90 days, the value of DASH has dropped by a staggering 45%. Although the digital asset has been devalued over time, DASH has enjoyed increased adoption, and as such increased daily trade volumes.

According to coinmarketcap, Dash has the 8th largest daily trade volume. Dash is now ranked as the 14th largest cryptocurrency with an estimated market cap of $1.55 billion USD.

The bearish trend is not exclusive to DASH as gross devaluation cuts across all digital assets.

The crypto market is at its lowest ebb, Bitcoin is trading below $6,500, Ethereum is also trading below $450 mark. Regardless of the bearish trends in the market, the progress of Dash has been on the upside.

The Future Is Bright for Dash (DASH)

Irrespective of the bearish trends that have overrun the Dash ecosystem, the progress, prospects, and potentials of the digital aspect cast a clear image for the future.

Dash is making strides in technological developments to solve many of the barriers to mainstream adoption.

Dash (DASH) is solving the barriers to mainstream payments adoption

The recent research paper released by the Imperial College of London and eToro predicts that cryptocurrency would be able to achieve mainstream payments adoption in a decade if done correctly.

The paper also highlights the barriers would need to overcome to achieve mainstream adoption.

One major barrier highlighted by the paper is that of public ledgers. Since public ledgers stores all transactions in the open for public availability, it lends the opportunity for industrial sabotage between corporations spying on their competitors’ spending habits.

However, Dash is an exception to this problem.

Dash is able to offer a compromise by providing, within one cryptocurrency ecosystem, the option to still store all information on a public blockchain, but also offers additional and optional privacy with PrivateSend.

According to the paper, these features will help Dash become a medium of exchange, a unit of account, and store of value.

Merchants and companies alike are beginning to recognize the benefits of Dash.  Recently, Rewards.com announced integration with Dash, which currently allows consumers to earn rewards in Dash.

In time, the integration will allow over 7,000 businesses across the world to make payments in Dash. There are also over 1400 merchants listed on DiscoverDash.com.

The Dash ecosystem is gardening popularity and gaining steam as more merchants and companies are beginning to recognize the benefits of making payments with DASH.

34 Bytes Payment Processor is the most recent company to add Dash as an option for payment because of its special features for payments.

Here is what 34 Bytes said about the integration;

“Dash offers several interesting features including InstantSend, and PrivateSend, Dash has been earning a reputation as a cryptocurrency that is well suited for commercial, in-store transactions, so it only makes sense that it will be added to our terminals as well.”

34 Bytes is a cryptocurrency point-of-sale solution. The integration will make Dash acceptable at over 1,500 merchant points around the world.

Dash is the second cryptocurrency to be supported by the 34 Bytes platform, which launched in 2016 with only support for Bitcoin.

We will continue to monitor Dash as the markets look deep in the red.