The Dent token, whose ticker is ‘DENT’, is an initiative of DENT Wireless Limited to leverage blockchain technology in order to revolutionize the methods of exchanging data in the global telecom industry.

DENT remained one of the unpopular cryptocurrency in the mass of blockchain projects, until July 6th when its Binance Listing stirred up a price pump that drew a lot of attention to the altcoin.

July 6th started as a regular day for Dent Coin, with very little variation in the prices of the token.

It soon changed when Binance announced its support for Dent Coin (DENT) on the platform. The announcement made by Binance on their official website read; 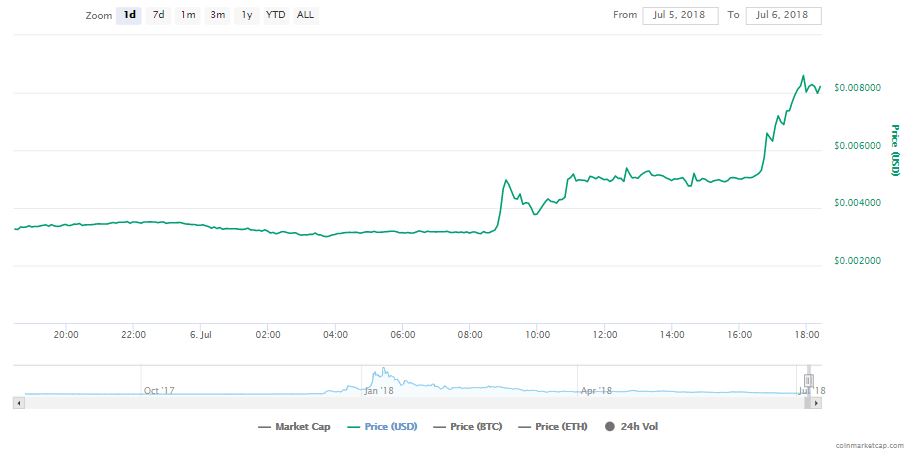 A day before the crazy spike in value, Dent had an estimated market capitalization of $37.7 million USD, however, 12 hours after the announcement.

Dent’s market cap flew to as high as $87 million USD to rank as the 102nd largest cryptocurrency, rising by nearly 150% in half of a day. Its market cap stands around $60 million at press time.

The price and the market capitalization of DENT were not the only areas that took dramatic turns following its Binance listing on July 6.

Although DENT opened for trade on Binance with two trading pairs; DENT/BTC and DENT/ETH, that was all that was needed for Dent Coin to lead the charts on Binance.

Less than 24 hours of its listing on the world’s largest digital exchange platform, DENT had displaced Bitcoin and Ethereum as the most traded – exchanged cryptocurrency on Binance.

The news was shared by the official Dent Coin twitter account much to the pleasure of its followers.

After its listing, DENT topped the chart with the highest trading volume on Binance after it recorded a 24 hours’ trade – exchange volume of $171,524,000 on Binance, with Bitcoin the close second.

Although there is a substantial drop in the daily trade volume of DENT (as expected following a pump), Binance is still its leading trade – exchange market.

DENT is now the biggest platform

The Dent token is the first ever cryptocurrency wholly dedicated to delivering end to end mobile data exchange.

On the day of the Binance inspired price pump, the Dent platform was also acknowledged to be the biggest blockchain project in the Telco industry after reaching a membership base of 2.5 million on its “Crypto Island” Puerto Rico. The announcement was made by the official twitter handle for Dent Coin.

Dent, which had its initial market for the Dent apps as USA and Mexico, set out to provide an easy way for AT&T and Verizon customers in the USA to send data top-ups, it also does the same for Movistar and Telcel customers in Mexico.

As at the time of this writing, Dent mobile applications are available to customers in more than 130 countries and has successfully integrated over 420 mobile operators.

The platform expects to provide better mobile exchange services for users across the globe. DENT is available on both iOS and Android devices.

It did not take long for the bears to put an end to the glamorous run of Dent Coin. After recording growths of over 150% in less than 36 hours, the trade volumes declined, the bears soon reacted leaving DENT with sharp declines (of up to 20% in one hour). 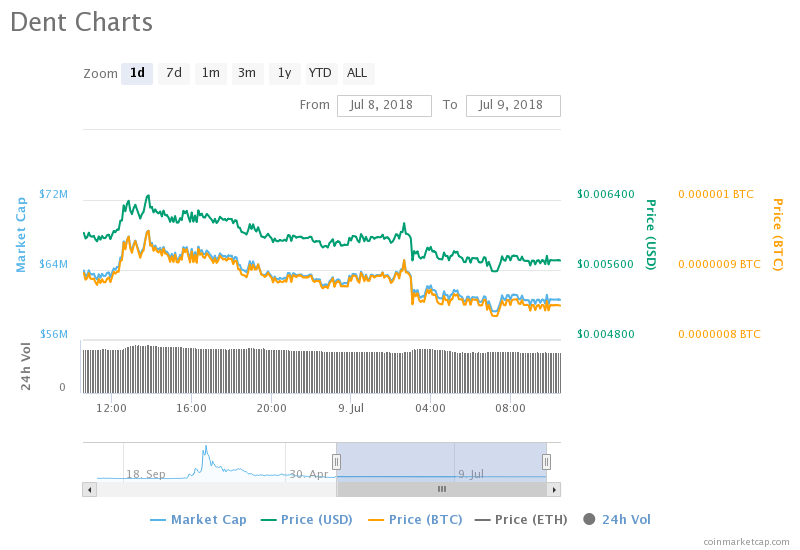 Despite the downtrend effects of the bears, DENT is showing signs of recovery, trading at $0.00581 with a price decline of 3.5% over the last 24 hours.

Dent is now the 135th largest cryptocurrency with an estimated market cap of $60 million USD.

$42 Million In Crypto Is Now Being Airdropped to NEO Investors