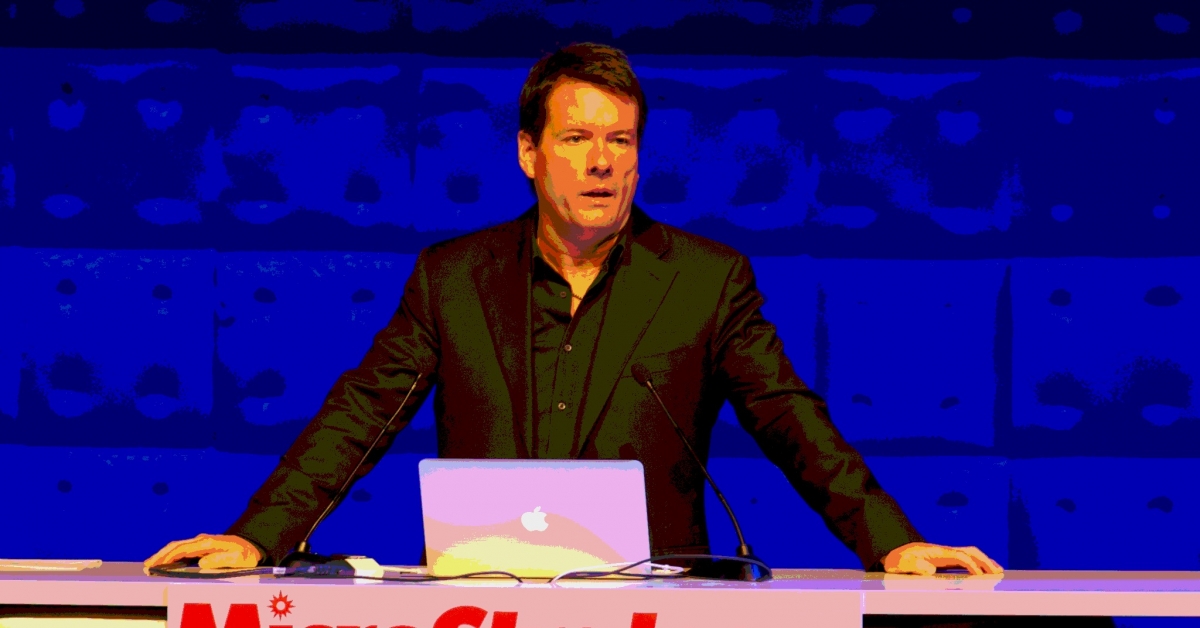 In his solo address, Saylor detailed the cryptocurrency playbook that propelled his three-decade-old data firm to newfound relevance in less than a year.

Largely eschewing the near-mystical rhetoric that has punctuated his public crypto musings since August, Saylor focused on hardline business strategies, procedures and dollar-sense language in a calibrated appeal to corporations.

“There’s a macroeconomic wind blowing – big – it’s gonna impact $400 trillion of capital. That capital is sitting in fiat instruments that are being debased. That capital is going to want to convert into strong money,” said Saylor.

Saylor’s goal remained the fomenting of monetary revolution. For months now he’s tweet-preached the gospel of a harder, faster, stronger “monetary network,” namely bitcoin, which Saylor became enamored with at the height of COVID-19 shutdowns and a disciple of when fiat printers started going into overdrive.

While the notoriously brash CEO’s past declamations in support of bitcoin played to retail traders, his sermon at the conference targeted a far larger buy-side force: corporations. MicroStrategy was the first U.S. corporation to invest its dollarized treasury in bitcoin, and now boasting a 71,079 bitcoin reserve, Saylor seemed determined his company won’t be the last.

Accountants, lawyers and company executives joined Saylor’s effort. Their attempts to front-run corporate what-abouters detailed the practical whys and hows of BTC accumulation in, at times, excruciating detail. But even at its most pro-bitcoin moments, lawyers reminded viewers to be wary of OFAC sanctions violations.

MicroStrategy’s show could not be separated from the CEO at its ring master. Saylor’s anchoring hour set the tone for reams of corporate bitcoin programming that followed.

“Every company has to make one of two choices” when faced with a world of belligerent money printing, Saylor said. “You either have to decapitalize, which is kind of like self destruct… or you have to recapitalize with an asset which is going to appreciate faster than the rate of monetary supply expansion. This is where bitcoin comes in.”

And this is where the dollar goes out. In Saylor’s world view, there’s no scenario in which the dollar retains its global reserve status. To the man who shepherded over $1 billion of MicroStrategy’s reserve dollars into bitcoin, that cryptocurrency is the only viable way for companies to survive the coming debasement apocalypse.

Listen: Michael Saylor’s Mission to Get 1,400 Corporations Into Bitcoin

The shepherd said “fiat derivatives” offer treasuries a false respite from “the road to serfdom.” Bonds, stocks and real estate are just a placeholder for fiat, he said. They will yield increasingly diluted returns so long as that underlying fiat continues to debase. The answer: convert them all to bitcoin.

ARK Investment Management projects that if every company in the S&P 500 invested 1% of its assets into bitcoin the crypto’s price would increase $40,000.

MicroStrategy’s corporate deputies followed up Saylor’s talk with a point-by-point of the challenges companies might face in adopting bitcoin. Referring to MicroStrategy’s own path, company President Phong Le and Jeremy Price, the financial planning executive, laid out the stakes and methods of getting one’s company on board.

Then it was the legal department’s turn. MicroStrategy’s legal counsel addressed questions in corporate governance, regulatory concerns and policy that underpin every decision in corporate America. The admittedly dry presentation outlined a concrete roadmap to implementation.

Policies to staunch insider-trading shore up the company’s ethical front, they said. For example, MSTR employees are prohibited from front-running company bitcoin buys with allocations of their own.

Le then returned to the stage with two tax experts to walk through bitcoin’s financial implications.

Together, the back-to-back-to-back-to-back talks offered MicroStrategy’s strongest case yet that its 2020 flirtation with bitcoin is no passing fad. With over $1 billion in bitcoin and and almost assuredly more bets to come, the company is now positioning itself to lead a massive corporate charge.

The conference’s lineup (which also featured panels on the actual business: building data intelligence products) was unabashedly blunt in its goal. Thursday, WORLD.NOW will trot out 10 crypto service providers in a marathon industry roadshow of firms vying for the corporate bitcoin allocations Saylor aims to seed.

“All of the vendors you’ll hear from tomorrow want you as a customer,” Le said.

MicroStrategy’s crew of bitcoin can-doers spent Wednesday publicly outlining the backroom how-to’s of a strategy that’s made Saylor one of the most influential bitcoiners to emerge from corporate America.

“We’re at the beginning of a very very long trend here,” said Saylor. “And so, with that, I have more stuff to say, I don’t have time to say it, but, you know, follow me on Twitter, and stay tuned.”