All eyes are on the bitcoin cash (BCH) blockchain ahead of a scheduled technical upgrade tomorrow.

While it’s a process that the world’s fourth-largest blockchain by market capitalization undergoes every six months, at which point it asks all users operating the software to upgrade to a newer version, there’s a twist this time around. Specifically, a deep contention over the cryptocurrency’s technical direction.

While previous forks have been supported en masse by bitcoin cash developers and miners, there are now marked differences of opinion between supporters of two main versions of the software – Bitcoin ABC and Bitcoin SV – over the future the direction of the code’s specific features (Bitcoin SV, most notably, would continue boosting the software’s block size).

This is significant for those who own or trade BCH because, if neither side has majority backing, then the bitcoin cash chain will undergo a split into separate blockchains, each with its own cryptocurrency.

This raises questions for investors and potentially brings opportunities into play.

One way to begin to assess options ahead is to look at how other traders are already responding. Over the course of four days from Nov. 2–6, the price of bitcoin cash surged 49 percent to reach a two-month high.

Perhaps not coincidentally, the jump occurred within hours of major cryptocurrency exchanges Binance and Coinbase announcing their support for the upcoming hard fork.

That’s likely because, if the major exchanges are accommodating the fork, potentially millions of traders will have access to BCH buying and will just need to wait a little for their wait for the free coins, and, as such, a wave of demand was triggered by the news.

Cryptocurrency trader Josh Rager described the sudden surge in bitcoin cash’s recent performance as an anomaly when compared to the broader market, suggesting the price rise must be a result of hype surrounding the fork.

“With current price action of BCH, it’s 100 percent related to the fork and support from exchanges. No other major cryptocurrency is seeing a notable price change.”

A technical analyst would argue though that all known information is reflected in the price of an asset and, by that logic, the sudden rise could have been foreseen. A trader going by the handle “Crypto Rand” did, in fact, suspect bitcoin cash was due for a big move anyway, although the fork news likely was the catalyst.

“Definitely the move was pushed by the news, but not only because of it. Technical analysis wise, it was also looking interesting. The current range proved solid for a long time having some good accumulation over there,” he said.

Since many notable cryptocurrency exchanges announced support for the fork, a few have even launched futures contract-like trading for future blockchains that could be created as a result of the split, which essentially act as placeholders until the fork is complete.

Poloniex’s ‘pre-fork trading’ has been live since Nov. 8 but will come to a close at 15:00 on Nov. 15, and at the time of writing, BCHABC and BCHSV are trading at $250 and $175 respectively. Earlier today the gap between the two prices was much narrower, indicating favor towards a particular fork is not as one-sided as many first thought.

Indeed, it’s an innovative way to gauge support for the fork, but a poll conducted by CoinDesk suggested the interest among causal traders was minimal.

When asked what their trading plans were ahead of the fork, a combined 76 percent of the 2,669 users answered they either plan to “wait and see” or are simply “not interested.” 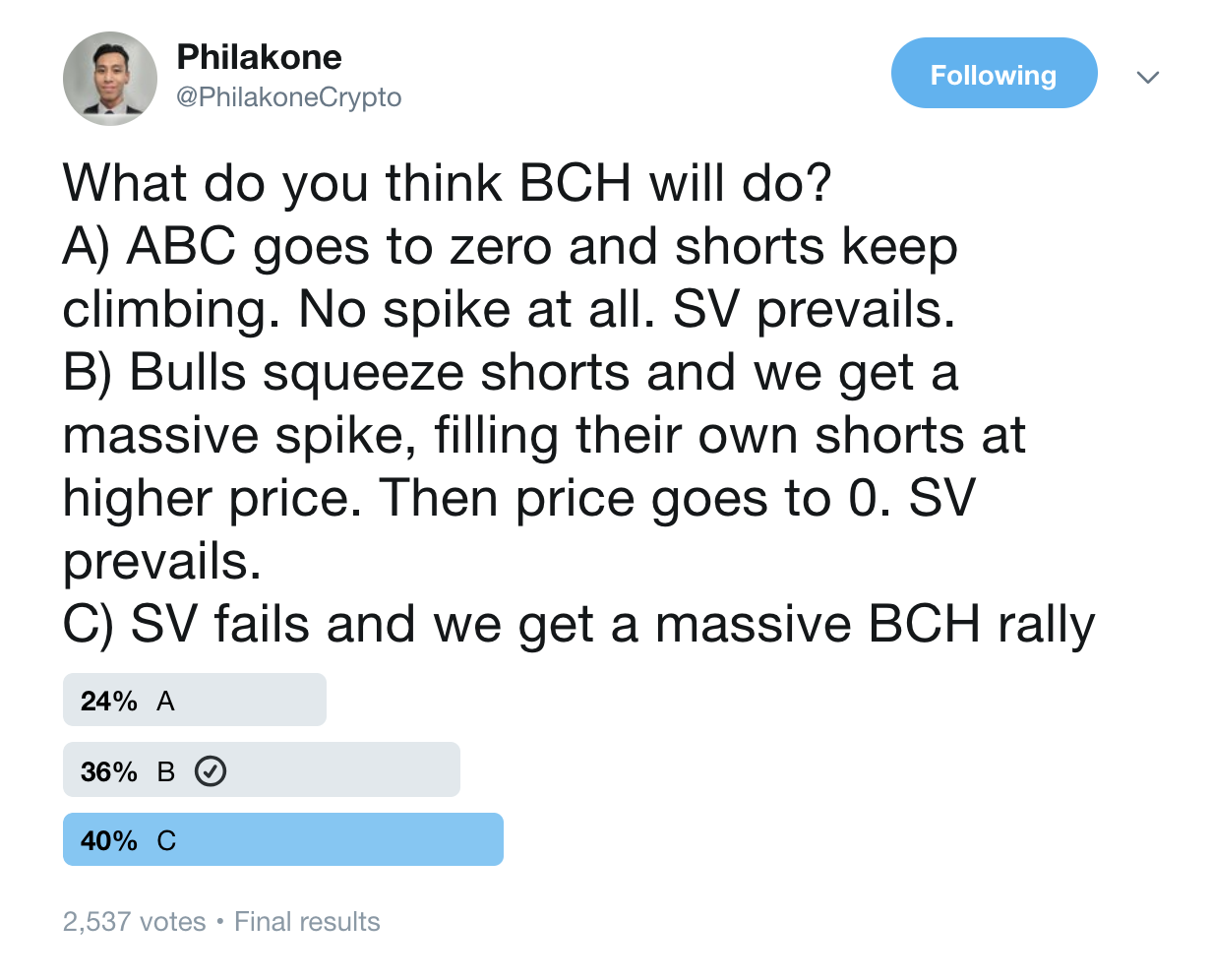 So far, 41 percent have stated they felt BTCSV is likely to fail, with 36 percent believing it will succeed. By Thursday evening, we will know who guessed right.

When looking at the price performance of past forks like zclassic or bitcoin private and their 90+ percent price declines, there’s merit in using caution when considering holding onto a forked coin long-term.

This sentiment does not seem to be lost among the traders who all agree entering a trade now would contradict their risk management practices. “I would sell half instantly and trade the other half during the next week,” Rand said.

A trader going by the tag “Credible Crypto” agreed, speaking to the short-term outlook that cryptocurrency traders tend to abide by:

“Most are in this for a quick profit and are not aiming to hold the newly forked coin for price appreciation. Those that sell first will win, the rest will be left behind (at least until the price for this coin stabilizes).“

“I wouldn’t be buying here. Buying in hope of something is a sure way to lose money over the long-term,” he concluded.

After the Fork: How Competing Bitcoin Cash Blockchains Might Wage War