When it comes to trading in the crypto space there are three common mistakes new traders make: going against the trend, trading in consolidation periods and forgetting to reduce their risk.

This is especially true when it comes to trading highly volatile coins with a low market capitalization and it pays to remember that when bitcoin’s price moves so too does the rest of the crypto market.

This had the dual effect of reducing the total value of altcoins while undermining investor confidence due to BTC pairings with prominent coins such as ether (ETH) and XRP.

Then there was the tether (USDT) scandal that saw the price of the infamous stablecoin drop to $0.869 on certain exchanges, creating a $300 disparity in bitcoin’s price amongst those listing tether’s price pairings versus those listing plain old USD. 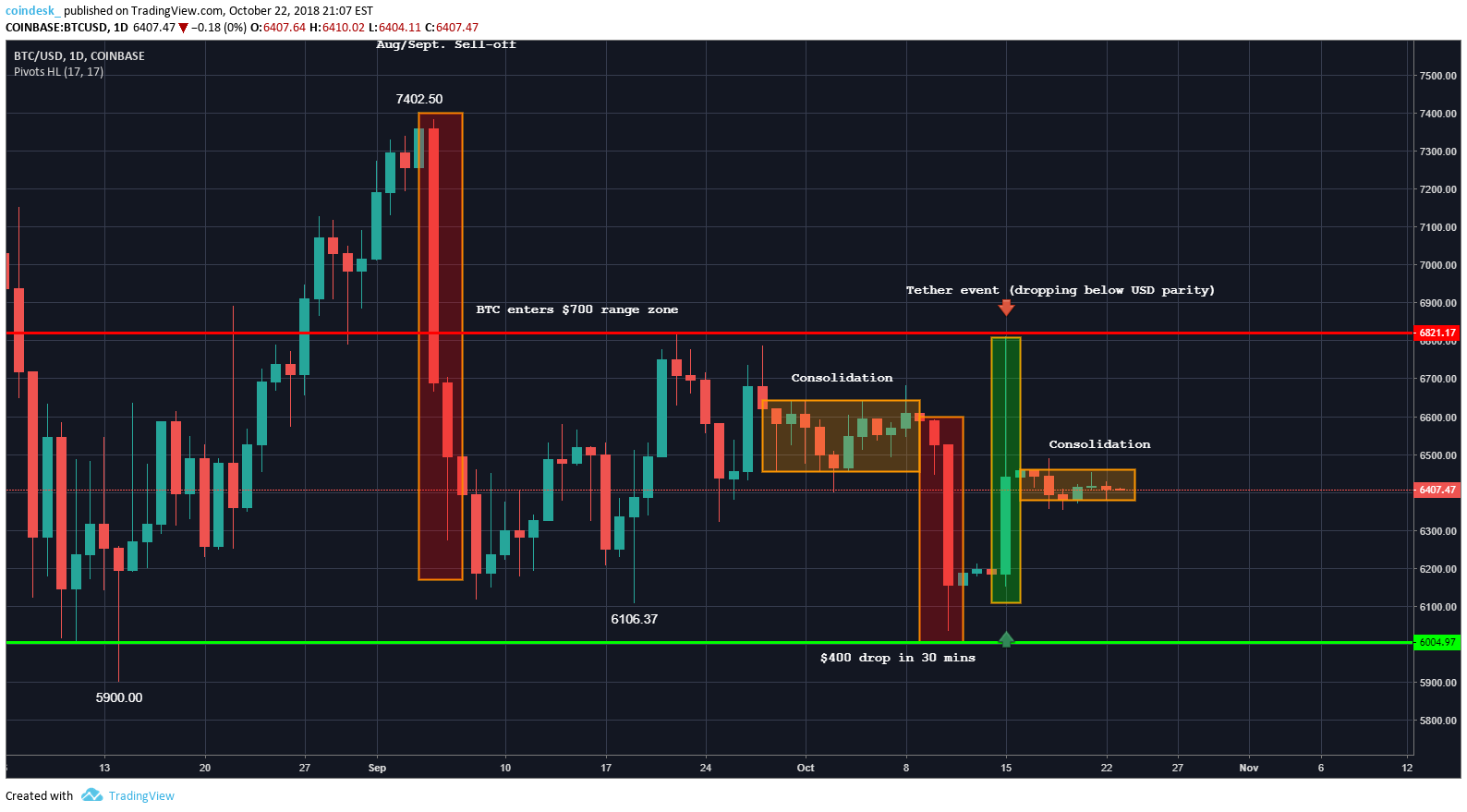 While traders may be aware of the price pairings and the fundamentals behind these wild price swings, they continue to dabble in alt-coins amid uncertain consolidation periods (see Oct. 11-Oct. 24. in its most recent range between $6,350-$6500) usually in blatant disregard to the primary fact that bitcoin could bring them under.

Indeed savvy day-traders like Philakone and CryptoChoe enjoy making trades on short-term periods that garner 2-3 percent despite the overall market trend being bearish — they make it work based on their personal trading styles and low-risk appetite.

To the newly crypto initiated, however, it can often be a dangerous game as consolidation periods generally breakout/down hard and fast, leaving many short/long positions in the dust.

This is especially true if you are a high-risk taker that continues to “all-in” on your favourite coin without first assessing the direction of grand-daddy bitcoin and the fundamentals affecting the market.

It’s always best to wait for confirmation in a change of direction or trend to reduce the risk of being caught on the other side of the fence with your pants down. 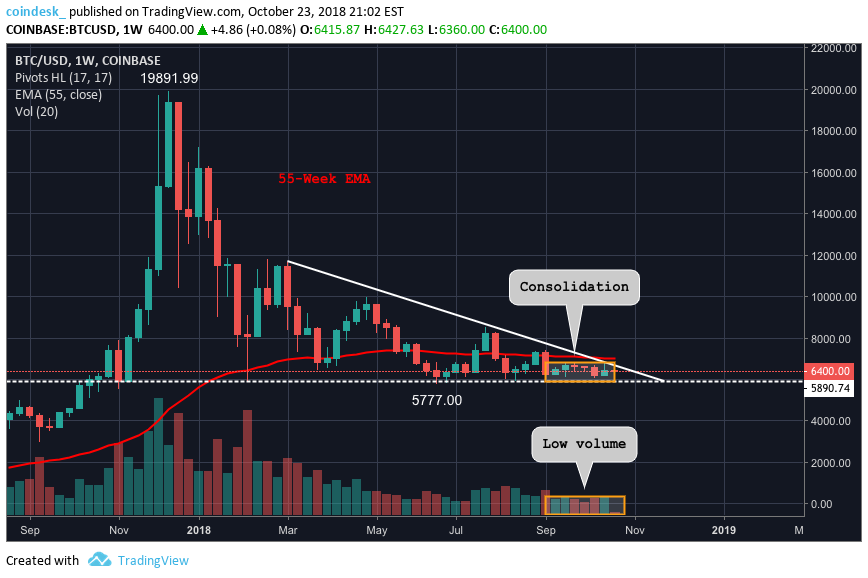 Often times, inexperienced traders will sit on their investments long-term after a big move, believing that the price will go back up.  However, it’s paramount you observe the overall trend before deciding on a reasonable entry/exit.

As we can see on the weekly chart the breakdown from Dec. highs flung the cryptomarket into the jaws of the big sleeping bear and has remained a bloody mess for 9-months.

This choice often leads into the stubborn investor “HODL” mindset, whereby traders refuse to sell the given asset based on their belief that price will rise back to the level they bought in just so they can ultimately exit the market altogether.

But waiting on a recovery could take years, with some having tied up the majority of their personal liquidity in crypto – the situation would look fairly dire.

It’s possible that the majority of new traders seen toward the end of 2017 are just itching to exit the market based around that particular strategy and certain price levels in hopes of coming out of the whole ordeal cost neutral but there is merit for the “HODL” strategy.

Provided you don’t check your Blockfolio every hour of the day.

If you bought bitcoin at $10,000 why do you care what the price is today? That, of course, depends upon your risk appetite, trust in the asset and whether or not you’re happy to wait out another possible year of bearish conditions with your “loose change” locked up in crypto.

Which brings us to the last strategy new traders forget to embrace; reducing your risk of exposure in the market.

This can be achieved simply by limiting the total amount of coins you buy at each juncture/period and the variety of coins you decide to stock in your bags.

As mentioned above, too often is the case that new traders will decide to “all in” on their favorite crypto as all this really achieves is increasing your exposure to market fluctuations and volatility.

So don’t be the guy that puts all his eggs in one basket or you’ll get burnt.

On a side note, it is worth being wary of the amount of disinformation out there as noted by Anthony Pompilano who demonstrated the case by posting a tweet that possessed bullish sentiment at the expense of inaccurate information, thereby accruing large activity on the tweet, while duping many in the process. The experiment showed that the dissemination of misinformation is generally linked to opportunistic agendas, so it pays to do-your-own-research (DYOR).

Disclosure: The author holds USDT at the time of writing.

Businessmen on chart image via Shutterstock; charts by Trading View