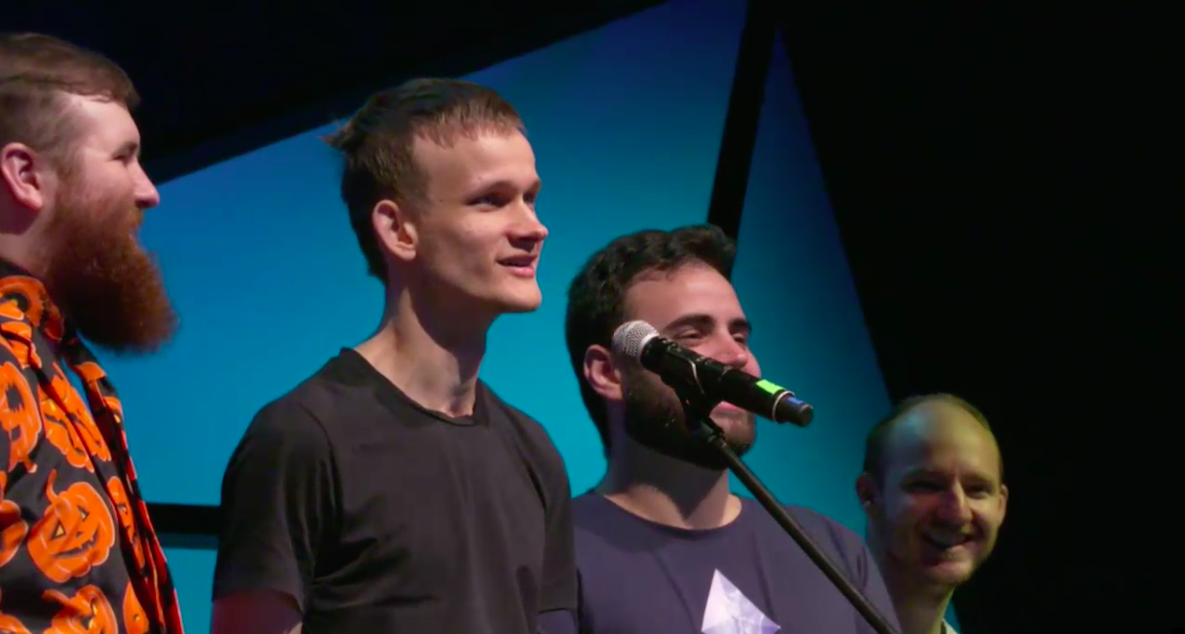 Singing on stage alongside songwriter Jonathan Mann, ethereum founder Vitalik Buterin ended his keynote at Devcon4 in Prague on Wednesday, with a song that listed “the graveyard of ideas” from the past five years of ethereum research.

An annual ethereum developer conference, Devcon4 is all about ethereum – past, present and future – and Buterin took his time on stage to touch on all those time periods as it relates to the platform’s long awaited switch to a more scalable and ecological paradigm.

Buterin placed a specific emphasis on the development history of this switch, its various learning curves and “aborted attempts at solving Casper.”

Since then, the project has been nicknamed “Shasper” due to the fusion of Casper with upcoming scaling method, sharding. Sometimes also referred to more generally as “ethereum 2.0,” Buterin told the crowd that he was reviving an older name for the proof-of-stake switch, “Serenity.”

“I refuse to call it Shasper because I find it lame,” Buterin said.

Name-calling aside, Buterin continued by saying that the switch is very near fruition.

Introducing “100 percent genuine pure organic Casper” alongside scalability improvements, Buterin expressed excitement about what the switch will mean for the ethereum platform.

“Serenity is ‘the world computer’ as its really meant to be, not a smartphone from 1999 that can play snake.”

According to Buterin, while the switch has taken several years to emerge in any technical detail, improvements that have concentrated over the last two years means it is now closer than ever.

A history of hiccups

Listing through the history of Casper and sharding development, Buterin detailed several errors and deviations on the roadmap. For example, an early idea, named consensus-by-bet, was eventually scrapped due to its incompatibility with later research.

“We created an entire proof-of-concept, it burnt months of our time,” Buterin said.

The DAO hack of 2016 and the subsequent Shanghai attacks led to a six-month delay in research, but still, Buterin said, “People were continuing to get a better and better idea of what a more optimal algorithm would look like.”

In 2017, he continued, ethereum research entered “the industrious age,” in which developers “came up with the minimal slashing conditions.”

He told the audience:

“We managed to nail down what a specification of hybrid [proof-of-stake] would look like.”

In March, an earlier form of the proof-of-stake switch – a form of Casper that was designed as a smart contract – was swapped out for a more efficient alternative, which was later dubbed Shasper.

Buterin said that while this “did end up nullifying work that was done before,” it improved the overall development by fusing the Casper and sharding workflows that had previously been working separately.

“If we worked on one spec, one protocol that would get us the benefit of proof-of-stake and sharding at the same time,” Buterin said.

According to Buterin, Serenity will be introduced in four phases.

The first phase, dubbed phase zero, will introduce the “beacon chain,” the new proof-of-stake based blockchain that will co-exist alongside ethereum itself and will allow Casper validators to participate.

“This is halfway between testnet and mainnet,” Buterin said.

Following phase one is a heavily “simplified version” of Serenity itself, featuring “shards as data chains” that will be able to cope for data storage but won’t be able to transfer smart contracts or money from one shard to another. Following that, phase three will enable cross-shard communication – meaning users send messages and funds to each other across different shards.

The fourth and final phase, Buterin said, will simply feature some tweaks and optimizations.

Buterin also spoke about the future more generally. For example, he suggested “improvements in privacy” may be possible through anonymized ethereum shards that only share encrypted information on the ethereum blockchain itself.

Additionally, he expressed interest in updating the blockchain to starks, a cryptographic mechanism that allows for the trustless aggregation of transactions into verifiable batches, while also offering a privacy-enforcing component. The method is being pioneered by a for-profit company named Starkware that recently received a $4 million grant from the Ethereum Foundation.

Buterin also reflected on what needs to happen before the Serenity launch can occur. First, the specification – or technical manual that will guide development work going forward – needs to be stabilized.

“The spec has been moving fairly quickly but will stabilize fairly soon,” Buterin said.

This specification will then be implemented into different programming languages. There are currently around eight different teams working on implementations, Buterin said.

“I think we’re not that far from having a release candidate for the spec,” Buterin continued, adding:

“Launch – that’s the milestone we’re been waiting for, that the milestone working toward for the past four or five years, and that’s actually not that far away.”

Watch the full sing-a-long below.

Coinbase’s Head of Trading Resigns After Six Months on Job

Tether’s Price Has Stabilized, But the Stablecoin’s Supply Is Still Shrinking