The $2 billion cryptocurrency network Tron kicked off an election this week – one of the last steps in its efforts to launch its official blockchain.

Largely free from classic campaign pageantry (there are no voting lines or oversight committees in cryptoland), the process finds the protocol seeking to leverage one of its core differentiators, a mechanism called delegated proof-of-stake (DPoS) that governs how those running the software can change its rules.

The process follows the late May release of what Tron branded as a test version of the tech. Then, last week, it held a much-hyped “Independence Day,” which saw users begin to scrap their ethereum tokens, used for fundraising, for TRX coins on the new blockchain.

Still, it’s the voting that will offer perhaps the most instructive lessons for crypto innovators given that elections-style blockchain governance remains relatively untested.

Adding to the significance is that other blockchains that have been early to embrace the concept appear to be struggling to put key concepts into practice. Already, Tron is showing signs it might be breaking from both its past statements and expected practices in ways that may say much about how the best-laid plans of distributed cryptocurrencies are always subject to change.

To understand what’s occurred, it helps to revisit Tron’s initial launch plan, which called for a certain number of “delegates” – individuals or companies, to be chosen or elected to validate blocks and process transactions on the network. Unelected, “placeholder” delegates were to operate the blockchain until the voting was complete.

But the process might be changing in one significant way – it’s currently unclear the extent to which the Tron Foundation, which created the software and is tasked with managing the blockchain’s development, is involved in the launch.

Prior to the launch, the Tron Foundation moved to “guarantee” that its funds would be kept separate from the voting process. 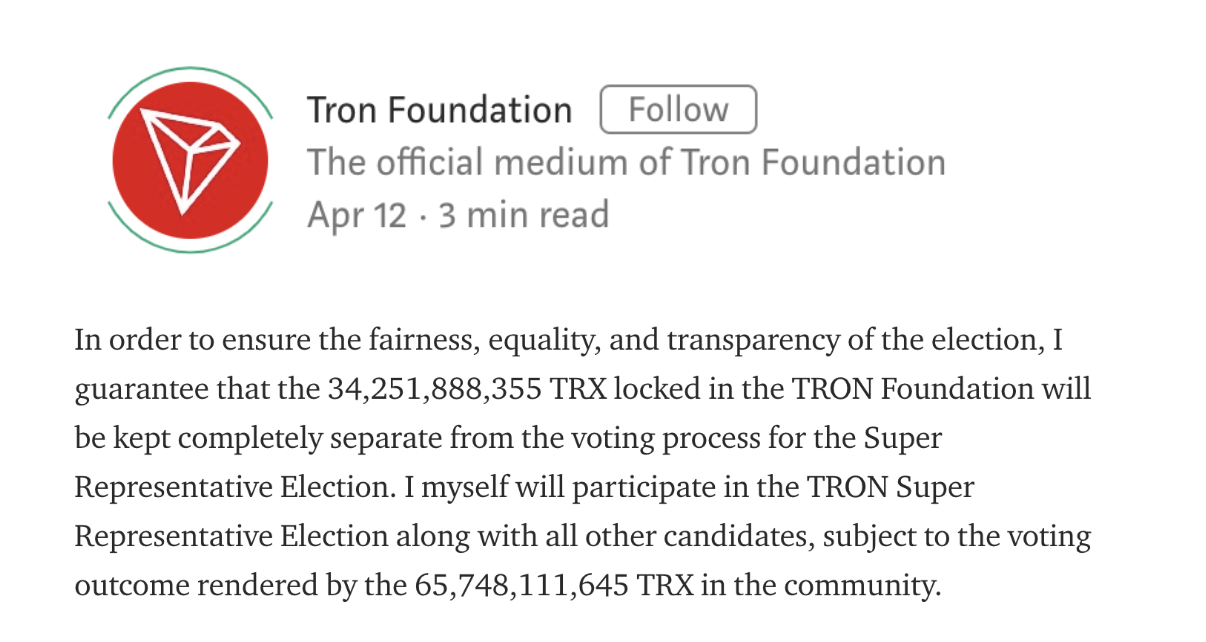 The foundation added on June 25 that it would entrust the genesis representatives with the funds, which would be stored across 1000 different addresses “to minimize risk.” It promised to announce the addresses within three days of its post, however it has yet to disclose the information.

In practice, therefore, Tron’s claim to keep its funds out of the voting process has been difficult to audit, a fact that may do much to color past statements by the project and its leadership team.

One potential issue is the transparency with which the process is being carried out.

The Tron project, for instance, has frequently sought to appeal to investors with rhetoric that emphasizes democracy and transparency, with the terms figuring prominently into communications to the public made by entities such as the Tron Foundation.

At the time of its founding, the project planned to both fundraise on and remain tied to ethereum for development. However, Tron later announced its intention to launch its own mainnet, citing both ethereum’s “inefficiencies” and its governance as its rationale. According to the Tron Foundation, ethereum does not acknowledge what Tron has called “the natural rights of the token.”

“In their systems, miners, founders and developer teams hold much of the power,” a Medium post from the foundation stated. “Token holders do not have any governance rights. This is an oligarchic system controlled by a select few, where there is no legitimacy in the true sense of the word.”

As such, Tron has cited DPoS as a means of creating a superior network to ethereum, arguing that it allows for better transaction processing speeds while creating a more democratic governance process. 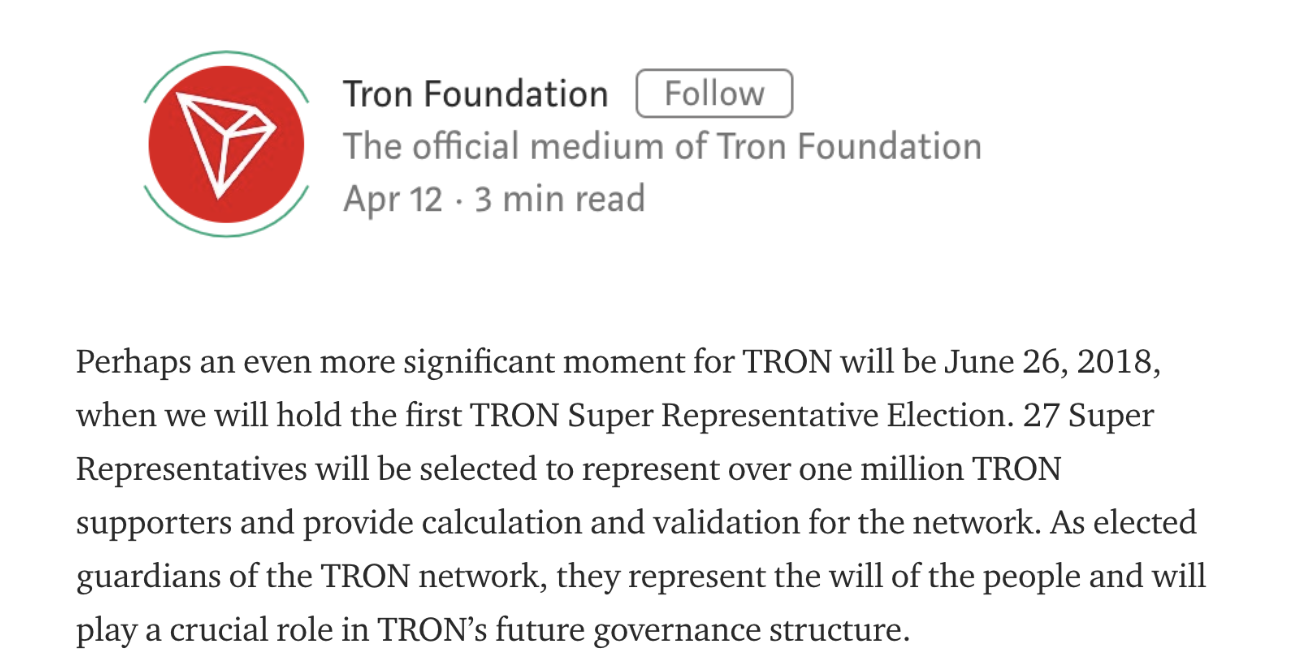 With this in mind, it’s perhaps noteworthy that currently, it’s unclear which entities are acting as placeholder delegates and how they were selected.

Whereas EOS, a hotly-anticipated DPoS blockchain project that launched at the beginning of June, had a well-documented process for picking the first round of validators before token holders started voting for representatives, Tron’s explanations and literature on its process have been less clear.

What we know is that on the Tron blockchain, 27 anonymous, temporary delegates dubbed “genesis representatives” are currently being tasked with operating the blockchain until token holders select an official group of “super representatives” by voting with their tokens.

Beyond that, there are significant informational gaps in its public statements detailing the election process.

Specifically, Tron’s public statements do not make clear the means by which Tron’s genesis representatives were selected, and therefore, how the entities in control of the network came into power.

In fact, the Tron team has introduced two separate narratives on this account.

In a June 19 post to a community forum on Tron’s website, “Tron_Chinese,” a forum administrator, wrote that the project’s engineers would choose the genesis representatives based on technical proficiency. 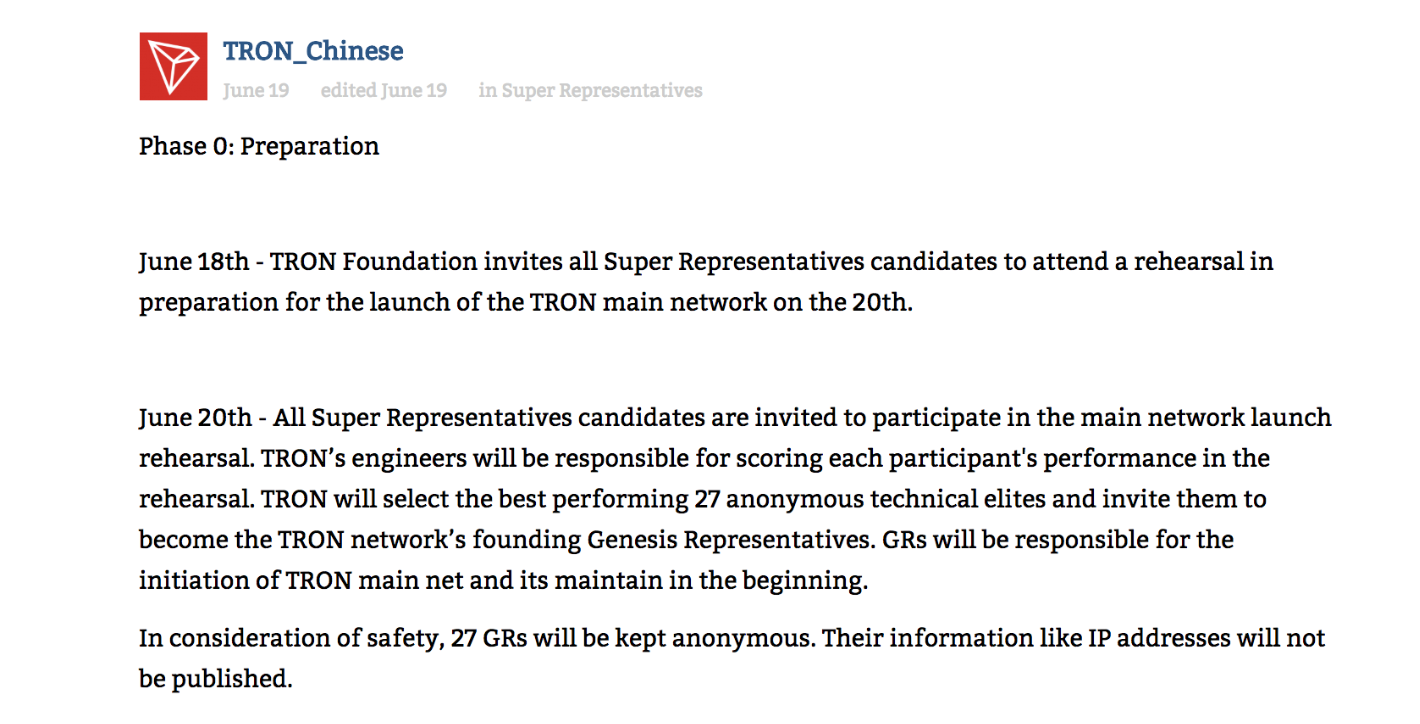 However, in a June 21 Medium post, the Tron Foundation claimed that the Tron community had chosen genesis representatives through an election. 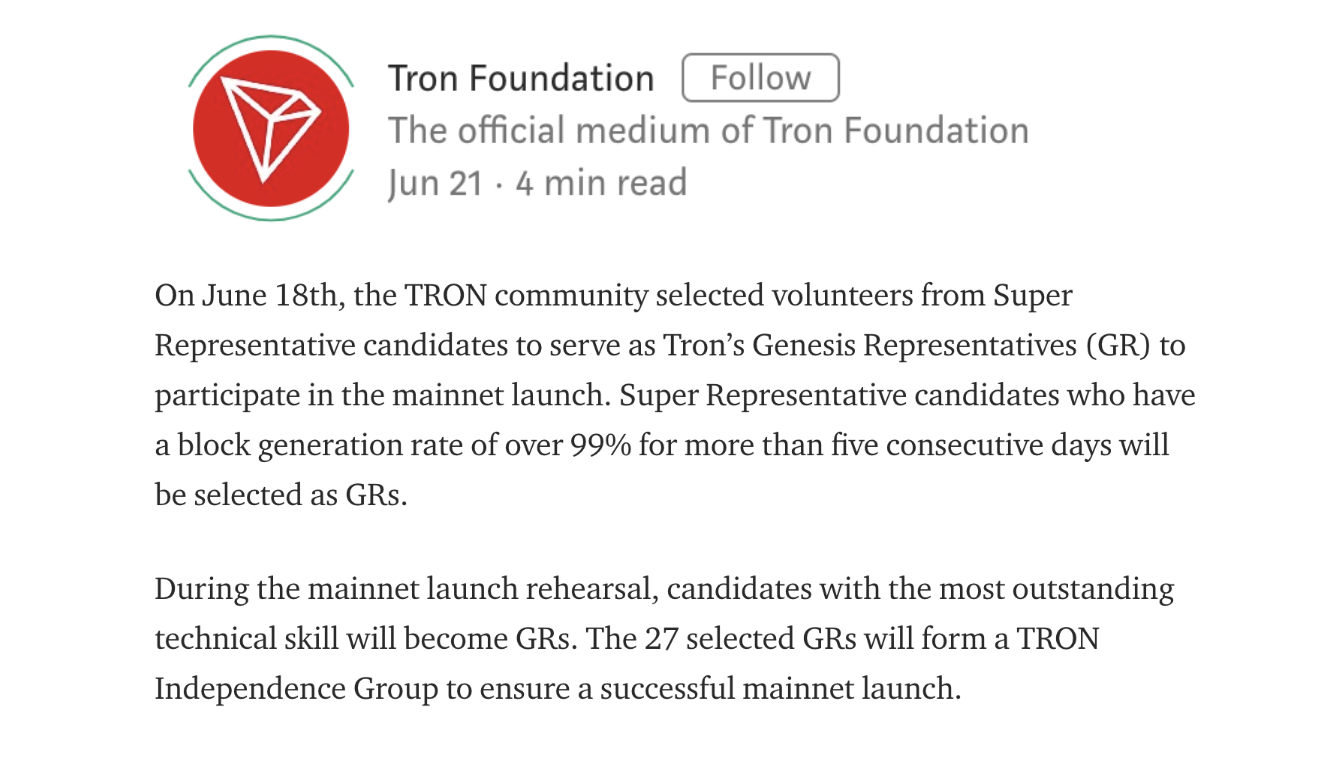 CoinDesk is notably not alone in its inability to find information on, or mention of, the genesis representative election described in the post.

Lucas Nuzzi, of Digital Asset Research, a crypto-focused firm that recently analyzed Tron’s code, said he’s also searched for information on the genesis election but has come up empty-handed.

Super representative candidates that CoinDesk contacted about the issue did not respond to requests for comment.

As such, Nuzzi has gone so far as to assert that the disparity in information reveals cracks in Tron’s commitment to openness.

“Their track record shows a consistent lack of transparency,” he told CoinDesk. “This industry was built on the basis of transparency, and their actions so far go directly against it.”

Tron skeptics will likely agree, and point to past allegations that the project plagiarized its white paper and failed to properly attribute the ethereum code on which its protocol is, in part, based on.

However, it remains to be seen if the ambiguity around the election will cause concern among token holders. Based on the lack of discussion about the topic in Tron community forums, the community’s faith in the project, and its ultimate ability to go live, seems yet to be shaken.