Devin Finzer is the co-founder of OpenSea, a decentralized marketplace for crypto assets.

The following is an exclusive contribution to CoinDesk’s 2018 Year in Review.

Games frequently serve as an experimental playground for new technology.

Since the launch of CryptoKitties – a digital cat-breeding game built on ethereum – roughly a year ago, games have provided a digitally native playground for early adopters to experiment with the unique benefits of open protocols. Currently, most of the top dapps by transaction volume are games.

While there’s a lot of early excitement in the blockchain gaming space, there’s some rightful skepticism. Tony Sheng’s post on why Fortnite probably won’t embrace the blockchain any time soon sparked a great discussion about how the tech fundamentally changes in-game economies.

At its core, his post argues that incumbents in the gaming industry likely won’t embrace blockchain because true digital scarcity breaks their existing business models. His post dives deep into the economic incentives that cause games to close their economy.

I quibbled with some of these, but agree with the high-level conclusion that:

“If games bring crypto to the masses, they will have different business models.”

Weeding the signal from the noise

The bull run in crypto made it difficult to weed signal from noise in the tech’s gaming sub-sector. Rising prices created a deep-pocketed community of ether-rich early adopters to engage in early dapps.

The fact that you “really owned your kitties” and could make ETH flipping them sparked a viral loop and culminated in the infamous kitty bubble of 2017. At the peak, cats sold for hundreds of thousands of dollars apiece.

It’s worth taking a closer look at CryptoKitties.

Because little gaming infrastructure existed on ethereum, CryptoKitties built everything themselves. They had their own website, their own artwork, their own on-chain breeding mechanic, and their own marketplace.

At launch, CryptoKitties was a fully vertically integrated game that used smart contracts as its database. The CryptoKitties business model was actually highly traditional: they sold generation 0 kitties and took a 3.75% cut every time a kitty was sold or sired. 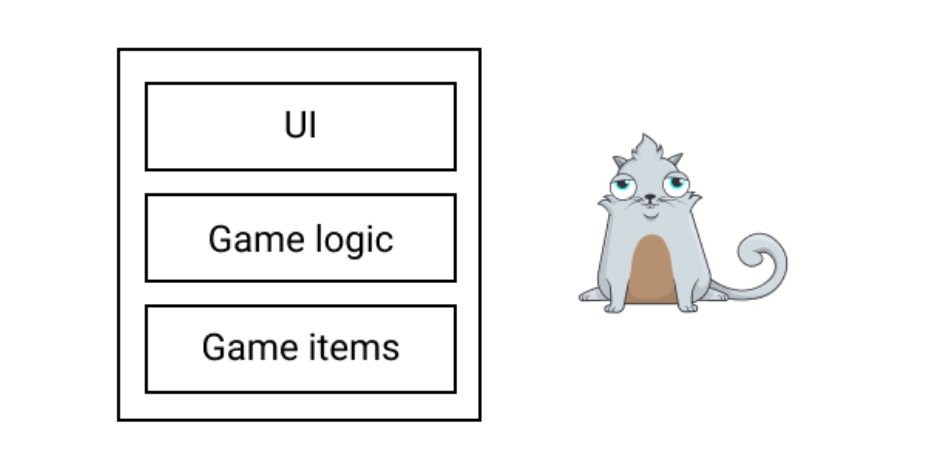 As many critics later pointed out, CryptoKitties could have built the same game on centralized infrastructure. They could have provided the exact same user experience on their website (they could even still take ether if they wanted to preserve the painful UX), and simply stored the kitties in a SQL database.

The CryptoKitties experience is what I’ll call “vertically integrated digital scarcity,” and it’s likely a reason that none of the CryptoKitties clones got any traction. To mainstream users, they were just hard-to-use games.

I’d argue that the real signal with CryptoKitties lay beyond the initial user experience: it was the ever-so-slight unbundling of the game.

The logic layer for CryptoKitties now existed on a smart contract whose address and source code was viewable to the public, and could be called by anyone with an ethereum address. Now, any ethereum developer could build an ever-so-primitive “layer two experience” on top of the game.

Want to write a bot that snipes under-valued kitties? There’s an open API for that. Want to write a kitty explorer site to let users browse recent sales? Just watch the events on the smart contract. 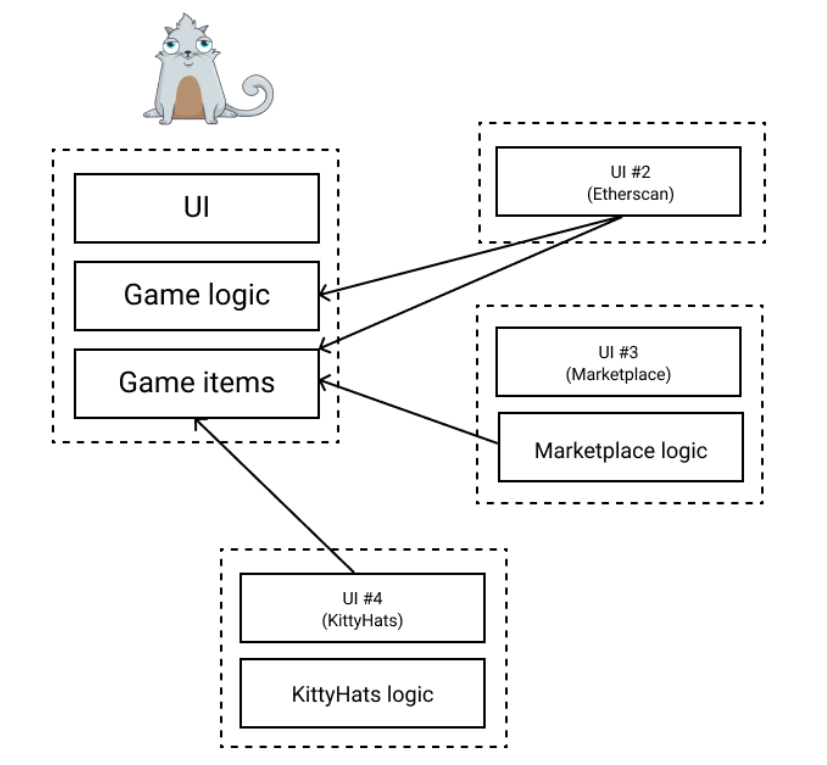 These experiences didn’t have to be complex. In fact, the first layer two experience was simply the existence of Etherscan, the smart contract explorer nearly all ethereum users have grown to depend on. Techie power users could go to Etherscan and read directly from the CryptoKitty smart contract to inspect their kitties.

A novel layer two experience was KittyHats, a set of ERC20 tokens that allowed you to accessorize your kitties. In theory, KittyHats drove up the value of individual kitties because now there was another thing you could do with them — but it was difficult to measure this impact and the experience was relatively isolated (it required downloading a chrome extension and accessorizing on a separate website).

Marketplaces were another layer-two experience. I co-founded OpenSea with the idea that a generic layer two experience around trading games might contribute.

But it’s worth noting that OpenSea also failed to capture or contribute significant value to the CryptoKitties ecosystem. At the time, it simply didn’t provide enough additional liquidity to be interesting.

In the same way that the vibrant ecosystem of exchanges and consumer experiences around bitcoin, ether, and ERC20 drove liquidity for the assets, the ecosystem created by layer two experiences will be what drives consumer excitement and confidence in digitally scarce assets.

In this new world of open protocols, what business models could work?

One could be a compelling layer one gaming experience, designed from the beginning with shared incentives to build layer two experiences. Decentraland is arguably the most ambitious attempt at this model. The Decentraland team is building an ecosystem of games, and attempt to capture value from this ecosystem through the appreciation of the MANA token.

The reason this might be appealing is that layer two experiences could fundamentally shift the economics of a game. A game has typically been limited to the audiences that the creators build for.

Games like Roblox and Second Life expand these audiences through user-generated content and in-game programming languages, but they’re still limited to what can be built in a closed environment. Games occasionally partner to build layer two experiences, but they’re highly coordinated and permissioned efforts.

As an example of how this could play out, take EVE Online, a massively multiplayer online space role-playing game. EVE Online has many characteristics of a blockchain game. Famously, the game runs entirely on a single server, which is never tampered with (kind of like a blockchain), so free market economics reign and frequently cause drama.

But the number of people who want to play a hardcore space simulation isn’t that high, so the audience is always limited. Now, imagine EVE Online but built on an open protocol. Third-party developers with no connection to the game might build mining expeditions, weird magical planets, secondary markets that facilitate bartering— all of which tie back to the original economy.

The audience of the game could expand dramatically: purely financially-motivated traders might enter the ecosystem, as well as casual gamers who enjoy only specific layer two experiences that branch off the original game economy.

Why might third-party developers flock to build on the game? If there’s A) enough of a network effect around the original game, B) an easy way to plug in their experience, and C) a method for capturing value in layer two, this would be a no-brainer.

A valid criticism is that all of this is far too difficult on existing technology. It’s hard to counter this argument; timing is always really hard. However, it may happen faster than we think.

Additionally, blockchain relies primarily on software innovation (which tends to move a lot faster than hardware).

It’s likely a perfect environment for small tinkerers to experiment. It will be exciting to see the developments over the next year that push the space forward.

Have an opinionated take on 2018? CoinDesk is seeking submissions for our 2018 in Review. Email news [at] coindesk.com to learn how to get involved.