Market capitalization gets a lot flack for being a poor metric to measure the value of a cryptocurrency – and perhaps rightly so – but that shouldn’t stop traders from using it as a tool to generate a market bias.

To summarize: the market capitalization of a cryptocurrency is a function of market price multiplied by the circulating supply, so its fluctuating value ends up visually mimicking that of price action when plotted on a price chart. And if it mimics price action, then technical analysis – the study of market behavior via price movement – can be applied to it just as if the price chart for bitcoin (BTC) was being analyzed.

It’s no secret that cryptocurrencies are highly speculative assets that all bank on the widespread adoption of blockchain and distributed ledger technology (DLT). Since the entire market is so reliant on the success of this factor, it’s rare for the trends of individual cryptocurrencies to deviate too far from one another for too long.

In other words, they are highly correlated, so if one cryptocurrency goes up or down in price, the others are soon likely to follow.

For the swing trader or long-term investor who does not care about intraday price fluctuations, charting the total market capitalization of all cryptocurrencies or just alternative cryptocurrencies (altcoins) can be an insightful way to analyze the long-term trend or bias of the broader market.

As it turns out, the total capitalization of the altcoin market is at an interesting technical juncture that could soon lead to another boom or bust for the market, which is further analyzed below through the use of technical analysis.

If we perform a simple technical analysis of the total capitalization of the altcoin market and connect the two major peaks in 2018, a long-term diagonal downtrend line is created. 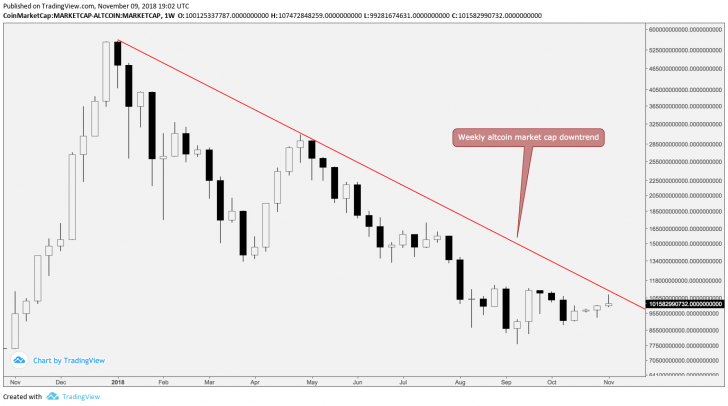 In technical analysis, breaking a trendline to the upside is a bullish indication and hints the overarching trend is beginning change. The longer-term the trendline, though, the harder it is to break.

As can be seen in the above weekly chart, the capitalization came very close to touching the trendline but has since pulled back, as indicated by the visible upper wick.

Looking at weekly candlesticks from January and May, another rejection from the trendline could lead to a significant sell-off, whereas a weekly close above the trendline would suggest the long-term trend of the altcoin market is beginning to shift from bearish to bullish.

While the weekly chart displays a major resistance hurdle that needs to break for a longer-term market trend reversal to take place, the daily chart reveals a nearer-term perspective on the outlook of the market, which has its own obstacles. 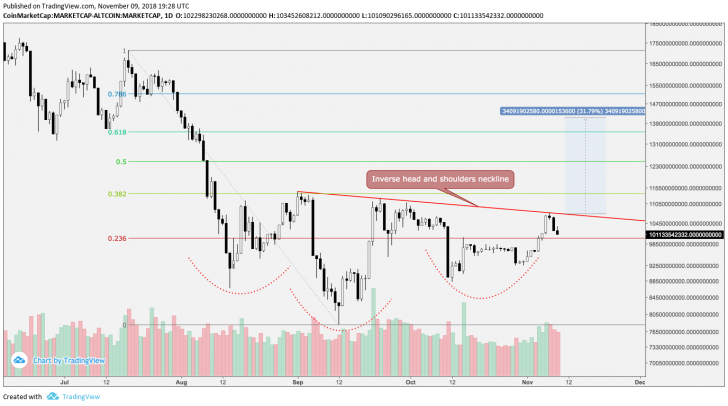 The pattern highlighted in the above chart is known as an inverse head and shoulders pattern which is a common ‘bottom’ or reversal pattern.

The pattern is comprised of three successive troughs, with the first and the third being similar in width and depth yet more shallow than the middle trough, known as the head.

In order for the reversal to take effect, the market capitalization would need to find acceptance above the neckline that was created by connecting the peaks on either side of the head with a trendline.

The Fibonacci retracement levels could be used as intermediate resistance levels, the nearest of which is the 0.382 retracement near $114 billion.