When it comes to analyzing markets, developing your own trading style can be the difference between a successful trade or financial pain.

Traders utilize a variety of indicators in order to add layers of confirmation to their bias in order to get the most accurate results. But what if you could only choose one indicator to use for the cryptocurrency market, what would it be and why?

A poll recently conducted by CoinDesk Markets revealed that volume was the indicator of choice for 39 percent of respondents, while the Relative Strength Index (RSI) came in second place at 29 percent of the total vote. 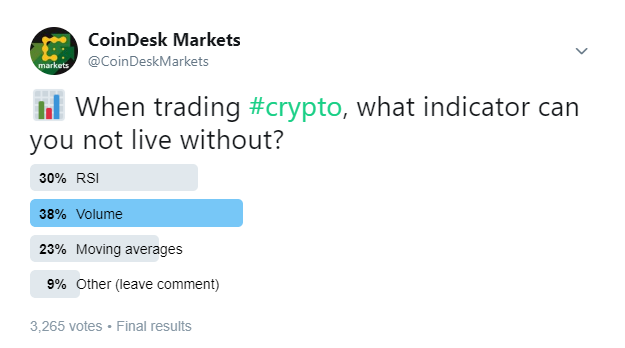 The poll elicited some great responses for alternatives such as Elliott wave theory, divergences and the stochastic oscillator, which are useful in their own right but are highly dependent upon an individual’s technical charting style and experience.

We reached out to some prominent cryptocurrency traders and chartists to see what they thought was the one indicator they couldn’t live without.

Matt Thompson, Director of Business Development and Operations at Coinigy had this to say regarding his top pick for analyzing the crypto markets: “Volume is hands down the most important aspect outside of price.”

“Even for many other technical indicators, volume can serve as confirmation or rejection of a given hypothesis,” he continued.

Per definition, volume is meant to describe the total number of shares or contracts over a given period and is usually expressed in a bar chart. Professional traders and chartists use volume to great advantage, following the mantra that if the price falls along with volume, it generally marks a point of exhaustion, signaling a reversal will happen soon.

While conversely, a rise in price with a drop in total volume presents a stronger case for the bears as they drag prices for a lower bid, usually upon meeting a key resistance zone.

Crypto Twitter chartist Josh Rager agrees with that sentiment. “I think volume is a good indicator. Higher price and low volume usually lead to a drop in price,” he said.

“TheCryptoDog,” a prominent Twitter personality and chartist, also backed volume as a “crucial” element in his technical analysis, telling CoinDesk:

“Volume speaks to the sincerity of the price action it is tied to. Volume for me is imperative.”

Putting it to Practice 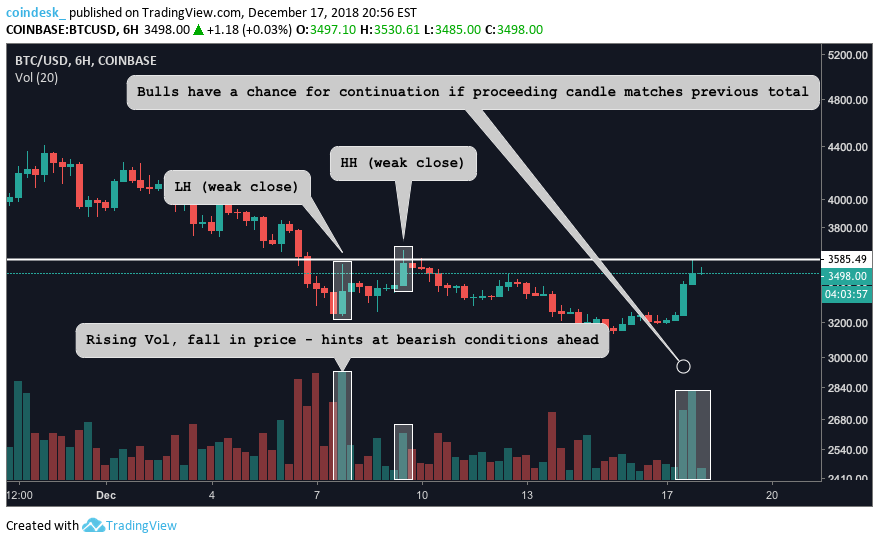 So, what does using volume look like in practice?

In the chart above, we can see the bitcoin price on Coinbase on December 8. The day’s trading closed mid-candle (during a price movement) at a time when volume was shooting up. If the volume is bullish and moving higher, but the price is dropping, it’s usually is a tell that traders hoping the price will rise are in danger of being trapped and are forced to sell for lower than they entered.

Price action thus turned until another decision was made two days later when on December 10 prices attempted to forge ahead beyond the $3,585 resistance level and were beaten back. A modest showing from the bears plunged bitcoin into a lower channel between $3,257 and then below $3,129 on December 12.

It has since rallied from its low position back to levels not seen in over a week with the backing of strong bullish volume.

Volume does have its faults for all its merit, however.

For example, volume on crypto exchanges might not actually represent that buyers will follow-through with an intended purchase. Volume can be faked with what’s known as “wash trading,” a term that refers to when traders put in orders for other traders to see, but withdraw them before they are filled.

It is true that particular exchanges have been caught up in a scandal surrounding true volume being displayed incorrectly, thereby manipulating traders into entering an unprofitable and risky trade.

Traders like Rager, however, believe bitcoin is a rarity among cryptocurrencies in that its market has real liquidity. “I think bitcoin is different,  there is so much liquidity compared to other cryptos,” he said.

Still, there is validity in analyzing bitcoin’s association with total volume on the charts, not least because they provide an additional signal to add to your bias, but because it can signal interest in the asset class as a whole, represented in grandaddy bitcoin’s demand – just be sure to select an exchange that can be cleared of any wrongdoing.

“If volume diverges from a trend, e.g. price continues to rise while volume falls off, then I start to think, ‘Perhaps this trend is weakening.’”

Disclosure: The author USDT at the time of writing.

What Happened to Dapps? (And 4 Other Big Questions for Ethereum in 2019)