What damage has the Bitcoin Cash fork done to the value of coin holders’ wallets?

Exactly what damage has the Bitcoin Cash fork done to the value of coin holders’ wallets compared to the rest of the crypto-community’s current woes?

The Bitcoin Cash fork has done a lot of damage to reputation of pretty much everyone involved, but – as the crypto markets have gone into free-fall since the time of the split it’s been hard to put an estimate on what the price damage to The Cryptocurrrency Formerly Known as Bitcoin Cash (TCFKABC) has been.

There has been much speculation about costs of incurred during the so-called Hash War between the rival blockchains of Bitcoin SV and Bitcoin ABC cost in terms of leasing mining support and energy expenditure. At points, research by BitMEX seemed to indicate that it was costing both sides well in excess of $1m per day to be at each others’ throats, but the true damage to the bottom lines of entities like CoinGeek, nChain and Bitmain and the personal fortunes of some of the personalities involved, may never be fully known.

Collaterally, the whole affair done undoubtedly damaged the wider reputation of cryptocurrency. Though it is problematic to draw a definitive cause-and-effect line between it and recent market drops, it certainly did not help.

However, with all this macro talk of Market Caps and optics, it bears remembering that behind the price of every coin, there are people and companies who have them in their wallets. So, how have those people fared from the whole affair? Pretty badly, to be honest. However, against a backdrop of bloodletting across the whole of the crypto-verse, perhaps not as badly as you may think.

One month ago, according to CryptoCompare’s Index, the US dollar price of Bitcoin ‘Core’ – the name ‘Cashers’ gave the original Bitcoin (BTC), from which Bitcoin Cash forked in August of last year – was $6,374. By this morning, that price had dropped to $3,791; A roughly 46% fall. 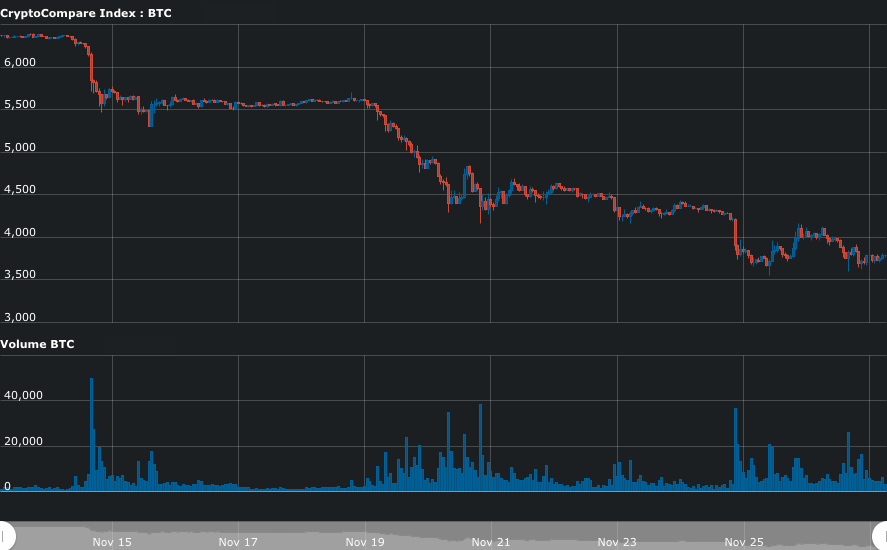 According to CoinMarketCap, its index of the total cryptocurrency market has dropped from $209.5bn to $123.5bn in the same timeframe, a decline of 42% in a month.

So, against the trend we’ve seen through 2018, the performance of Bitcoin has been worse than that of the market as a whole over that period – with potentially worse to come. It now sits at over $2,500 under its 200-day simple moving average, and has done since mid-March – making the last three quarters of 2018 about as bearish a period as you could wish to avoid in terms of the market as a whole.

As recently as May, Bitcoin Cash – lest we forget – reached its recent peak at around $1,700 according to CryptoCompare. On November 6th, it’s pre-fork high, that value was briefly in the $630 region. That’s already a haircut of over 60% in six months. It’s worth noting, though, that BCH has been valued close to $400 at points.

With those raw prices in mind, the fork between the two seems to have done significant extra damage on top of a already bruising 2018. As we’ve previously covered, TCFKABC is now effectively two cryptocurrencies, with exchanges and wallets planning to, or having already, split their customers’ deposits of BCH into the new Bitcoin ABC and Bitcoin SV iterations. Simple enough, at least by cryptocurrency standards.

However, tracking the price of TCFKABC across exchanges is a little more involved, as some have given Bitcoin ABC a new trading ticker (say BAB, BCHABC), while others have awarded it the old Bitcoin Cash ‘BCH’ badge. This means, when indexing the prices across various exchanges, as CryptoCompare does to get a weighted pricing overview, it is now tracking BCH-, ABC- and SV- pairs.

So, for the sake of this piece, we took CryptoCompare’s 24hr trading volumes for each of the two Bitcoin ABC versions (BCH and the other ABC tickers) it quotes a price for, and attributed a weighting to price of each. We assumed, as SV has formerly given up any claim to the BCH ticker that both of these were now effectively ABC.

Currently the ABC-specific tickers, used by some of the biggest exchanges – including Bitfinex, Coinbase, and Kraken – account for around 63% of the total trading volume. The old BCH ticker now mops up the other 38% in locations like Bittrex and OKex. However, the price on those latter exchanges are slightly higher.

This is the post-fork price of Bitcoin ABC, according to CryptoCompare… 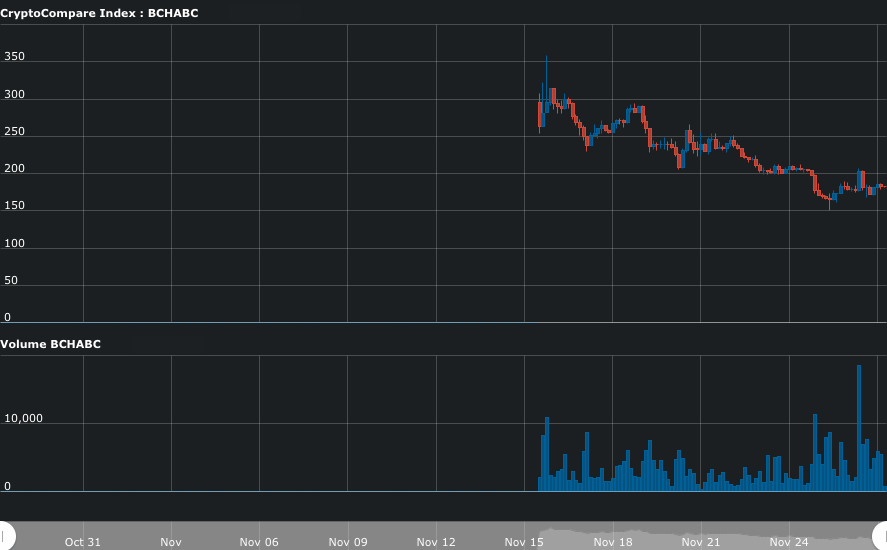 Below is the price of Bitcoin Cash on exchanges using the BCH ticker over the last month, according to CryptoCompare. Bitcoin Cash forked on Nov 15th – as shown by drop-off in volume. 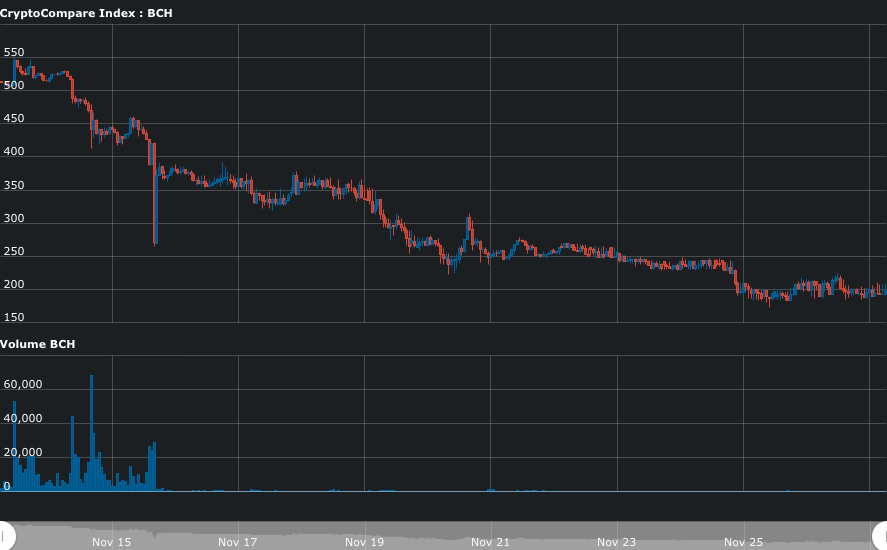 When we snapshotted our pricing, BCH was worth $198 and BCHABC $182. This produced a weighted average price for the two of $188 based on a combined volume of $243m over 24hrs. 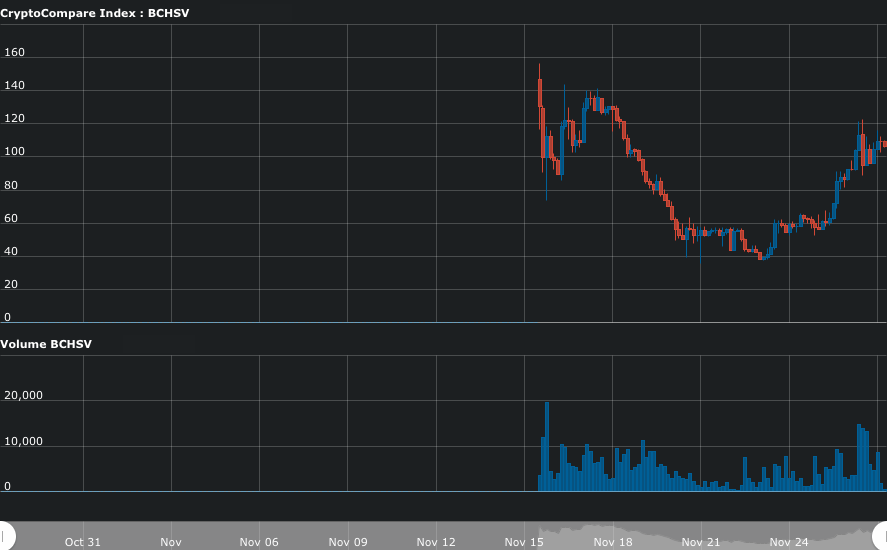 Thus, in terms of coins in wallets, we can estimate the total cumulative dollar value currently being held by someone with one of each coin is somewhere in the region of $304 – that will differ, though, depending on where and when they sell it.

Based on the pricing of BCH exactly one month ago, which was – at best – $514, according to CryptoCompare, that’s a drop off of roughly 40% on what someone would have valued their old BCH at before. That’s a pretty rough extra drop.

However, somewhat ironically – and despite everything that’s transpired in the last two weeks – that person would currently be just better off with their Bitcoin Cash than someone holding Bitcoin ‘Core’, had they both bought the same dollar value of them on that day.

If you think that sounds crazy, to be honest we do too. It may not be the case shortly, though.

As we recorded yesterday, following news of a cessation in hostilities between the two BCH factions, Bitcoin SV went on something of a price rally. At points yesterday, it was worth nearly 3.3x what it was at its lows – around $37 on November 23rd. If we’d done the same maths back then, using the same formulas and assuming the same exchange splits, the combined price would was $259 for the two. With Bitcoin sitting at $4,241 on that date, BCH wallets would have been worth about 50% less, with ‘Core’ hodlers ‘only’ facing down losses of a third.

If Bitcoin SV reversed Sunday’s big price moves today, while ABC held station, the combined value would be $255 again, making matters worse – even against Bitcoin, which itself has been falling quicker than crypto markets in general.

The wild card in all of this is how those who now have two coins in their wallets where they once had one will react when they can deposit, withdraw, or sell them on exchanges (maybe even use them to buy stuff) – as facilities are still limited in that respect. Should either coin not be able to hold its current price level, or worse one experience a large dump onto an illiquid market – based on yesterday’s snapshot the volumes of ABC especially are down considerably from those of BCH back in October – with little demand, the losses could be significantly amplified.

So, for now, Bitcoin Cash holders are suffering no more or no less than the rest of the crypto-community as a whole. Indeed, if you bought Ethereum at its January peak (and all-time high), you’re currently down 92% in total – compared to our estimated drop of around 90% from Bitcoin Cash’s 2018 top price.

However, if you bought Bitcoin Cash at its all time high of over $4,000 on December 20th of 2017, we don’t have many words of consolation for you right now. Sorry.