New data is offering insight into how crypto traders are pricing in a coming technical update to bitcoin cash, one that could cause the world’s fourth most valuable blockchain to split into two competing networks.

At press time, there are now almost twice as many open short positions betting that the price of bitcoin cash (BCH) will fall as there are longs betting its price will rise. According to data from crypto exchange Bitfinex, which allows margin trading for multiple cryptocurrencies, there are currently 89,457 open BCH short positions and 53,322 open longs.

That so much market activity is taking place is perhaps no coincidence, since there is a network update scheduled for bitcoin cash set to take place on Nov. 15. Under one possible outcome, BCH will split into two cryptocurrencies – one centered around the Bitcoin ABC software, the other around the Bitcoin SV version of the software – resulting in two distinct versions of the code.

(Traders who own bitcoin cash, in such a scenario, would then hold value on both blockchains.)

Still, while more margin traders believe in the possibility of a price decline, there’s strong sentiment on both sides. BCH longs and shorts both reached all-time highs in the last 24 hours. 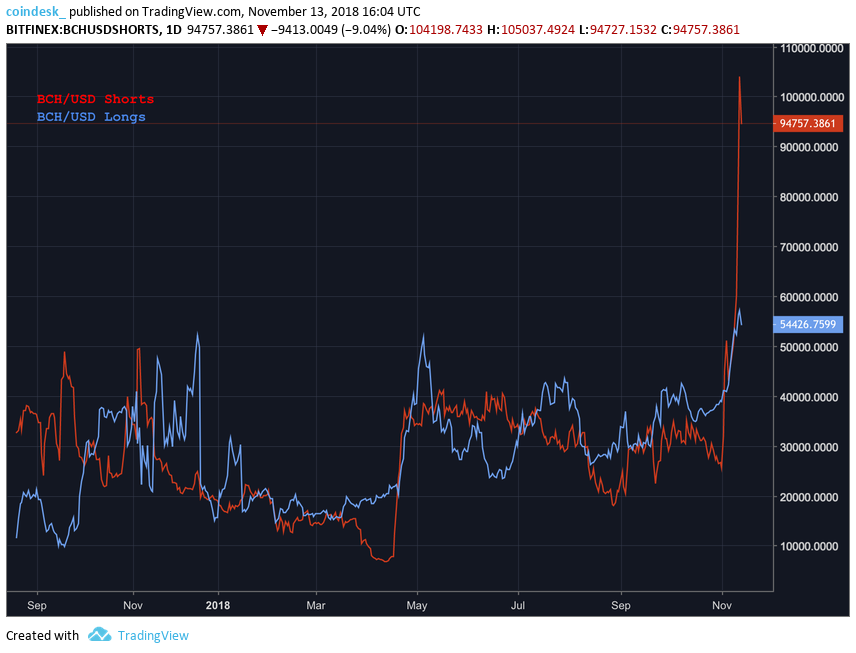 Short and long positions began to pile up on Nov. 2 when exchanges like Binance and Coinbase announced support for the upcoming fork. From Nov. 2-7, the price of Bitcoin Cash spiked over 50 percent to reach a two-month high of $646 on Bitfinex.

Surges in price are usually met with a rise in short positions since the more significant the ascent in price, the more likely a pullback tends to become. In this case, the recent surge in price combined with the upcoming fork created a perfect storm for a bearish trading environment.

It’s likely many traders brought up BCH in anticipation of the fork purely in order to receive “free” coins that could arise from one scenario. Once the fork occurs, the recent purchasers of BCH could simply sell BCH and either keep or sell the forks in order secure a profit.

As can be seen by the skyrocket in short positions, the market finds a “post-fork” sell-off to be the most likely outcome.

However, the abundance of shorts may put bears at risk of a short squeeze should the price rise above its recent high. If the price of an asset begins to rise to the point of a short no longer being profitable, those shorting will likely be caused to close, or cover, their position in order to avoid taking a further loss.

The act of closing an abundance of shorts can have a bullish impact on the market and cause a rapid price increase, known as a short squeeze, since the only way to close a short is to buy back the underlying asset.

Since longs are also at all-time highs though, a long squeeze is also a possibility if prices continue to dip. Closing a long requires the selling of the asset which can have a bearish effect on its price if the closing is done in abundance.

While its just speculation at this point, one thing is for certain, all eyes will be on Bitcoin Cash on November 15.

How the CryptoVerse Platform will Improve the Blockchain Industry