That market development coincided with a more than three-month high in 24-hour trading volume the same day, according to data collected by CoinDesk. The world’s 17th largest cryptocurrency by market capitalization rose to $0.114 at 09:15 UTC – its highest price since Sept. 5, while accumulating more than $45.6 million in 24-hour trading volume. That latter figure represents the most volume since July 29, according to CoinMarketCap.

It’s worth noting that NEM’s price jumped to a peak 25 percent amid news that trading of the token is being re-enabled on Tokyo-based cryptocurrency exchange Coincheck for the first time since 500 million NEM tokens were stolen from Coincheck’s digital wallets on On Jan. 26th, 2018.

The price of NEM began to spike at approximately 8:15 UTC, roughly 45 minutes before Coincheck posted a public announcement regarding the re-enabled trading at 9:01 UTC.

NEM was last seen at an average price across exchanges of $0.107, up more than 16 percent on the day. 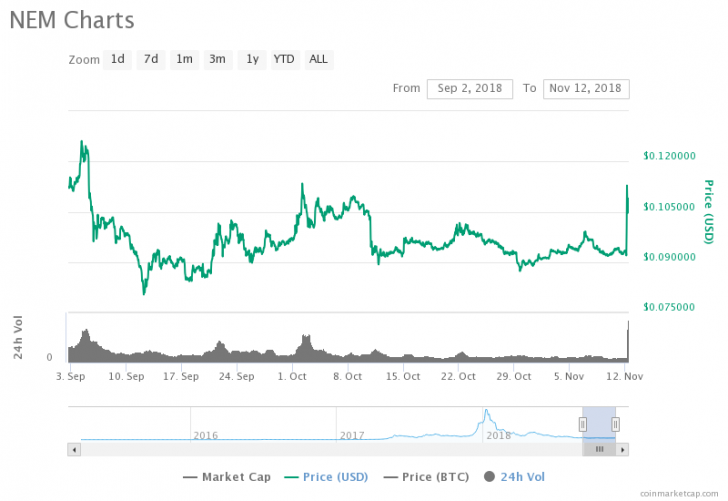 Other major cryptocurrencies are printing modest gains with seven of the ten largest by market capitalization reporting positive 24-hour price developments. Names like Monero (XMR) and XRP (XRP) are currently up over 3 percent while the world’s largest cryptocurrency, bitcoin (BTC), is up just 0.41 percent on a 24-hour basis.

The total capitalization of the cryptocurrency market now stands at $213.4 billion.