Crypto trading platform Kraken has defended its decision to allow continued trading in Ethereum Classic, but managed to annoy one of Ripple’s main men along the way.

With Ethereum Classic seemingly still the subject of a 51% attack, which – depending on who you believe – could have led to something in the region of $1.1m of double spending of the crypto, exchanges around the world have been sorting out how to react to the issue.

When the Kraken exchange took to Twitter last night to explain its response, it led to an interesting too-and-fro as it defended its policy. Put simply, Kraken decided to stop users withdrawing or depositing ETC into its wallets, but decided that it would continue to allow trading across the platform.

Ethereum Classic (ETC) funding has been disabled due to the ongoing 51% attack on the network. Funding will be resumed when the network’s health has stabilized. Trading continues, for now. Follow the incident at https://t.co/Zsx36qQe5O

When Coinbase first reported the issue, its version of events was initially disputed by the Ethereum Classic team. Since that point, however, the exchange has moved beyond its initial response of shutting down wallets by doubling-down on allegations of double-spending and moving to halt trading of the cryptocurrency – which forked from Ethereum back in late 2016 following The DAO hack – on its platform. That’s a big step, little more than four months after it was first made available to users of Coinbase consumer.

It would appear that its version of the story was correct, too. While there’s been no official communication confirming the Coinbase version of the timeline from the main Ethereum Classic Twitter account, recent hours have seen it  retweet blogs, and other messages ostensibly confirming that take. Chief among these was a Medium blog from a key member of the ETC community, Donald McIntyre (business development manager at troubled developer ETCDEV), that immediately references the initial Coinbase post, calling it a “major setback”.

Why I Am Still Optimistic About Ethereum Classic (ETC)…

Kraken, however, has refused to go as far as Coinbase in stopping ETC trading – a decision that led to enquiries from on XRP advocate and investor tweeting from the handle ‘ecent’ (@EDadoun).

Can you help the community understand the logic in continuing to list a digital asset that 1) Has lost a significant portion of its developers and 2) Experienced a successful 51% attack? Wouldn’t delisting it entirely be more logical? Thanks in advance for the comments!

Their query bought a quick and robust response from the Exchange…

The exchange’s purpose is liquidity and price discovery. Who benefits from it being delisted?

“Involved in 51% attacks”? You’re talking about like 90% of coins. How about “losing” your first 32570 blocks? Would you say that’s a “problematic scenario”? ETC is down less from the ATH than many other coins. The market doesn’t seem to agree with your sentiment.

The exchange moved on quickly, with Kraken continuing to defend its decision – however, ecent appeared to push a button with whoever was operating the exchange’s Twitter account at the point he suggested that “delisting / restricting” coins that have been involved in “51% attack or similarly problematic scenarios” would so “more responsibility.” 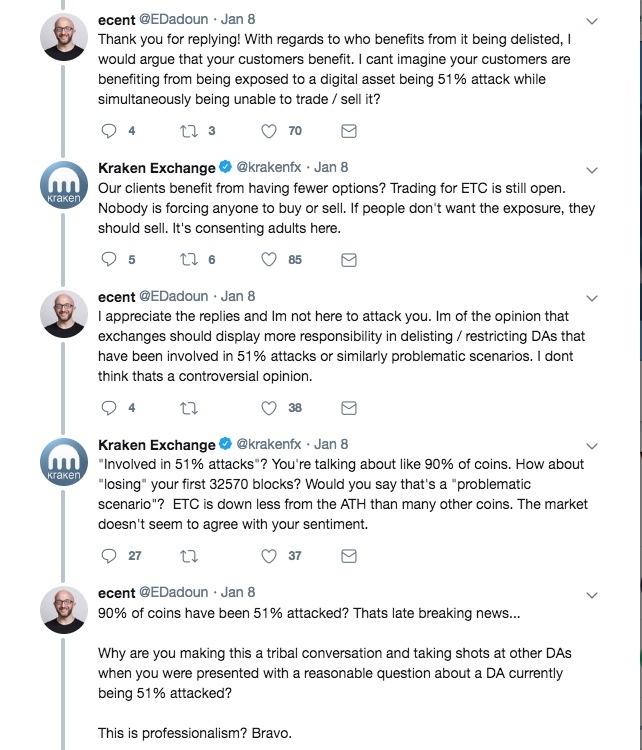 The reply, which you can see above (fourth tweet down) was swift, and directly referenced a matter that concerned XRP from early 2018, and BitMEX’s allegation that Ripple was controlling the XRP ledger and had reorg’d the crypto’s first 32,570 blocks out of existence – a matter than has also been discussed by the YouTube channel Magical Crypto Friends and addressed by David Schwartz, Ripple’s chief technical officer, in a Stack Exchange thread where he said “It doesn’t mean anything for the average Ripple user”. BitMEX, at the time, disagreed however; its researchers concluded the the anomoly could mean “one may be unable to audit the whole chain and the full path of Ripple’s original 100 billion XRP since launch”, and that could “indicate that there may have been resets of the ledger in the early period.”

It was also part of the debate that stretched throughout 2018 regarding whether or not XRP was centrally controlled – a matter that cuts to the heart of its status as a potential security. Were it defined as such in the eyes of the law, it could significantly harm the Ripple business model and XRP’s valuation.

Not surprisingly, Kraken’s allusions to the matter, soon attracted the attention of the vast XRP-supporting Twitter presence. Eventually, it would seem, word of the outburst got back to Ripple itself – and, once again, David Schwartz jumped in to emphasise the company line that Ripple and XRP are two separate entities

It’s irresponsible when exchanges misrepresent digital assets in this way – @Ripple is a private company, different from XRP or the XRP Ledger. They’re not interchangeable, and there’s no disputing it. https://t.co/ZPuuSN3XPR

As assured as the Ripple man may sound about that, though, it’s a matter that’s far from certain. Coinbase – much to the ire of many XRP supporters, some of the most vociferous on social media – listed Ethereum Classic in August, but continues to overlook the crypto that Ripple created, seemingly unsure about its status and unwilling to attract the ire of the SEC in the U.S.

For much of 2018, calls for Coinbase to list XRP were something akin to a rallying cry for its online army – and recent problems with Ethereum Classic have not been missed as a opportunity to point out to Coinbase that its decision may have been wrong.

Coinbase should de-list Ethereum Classic #ETC because it places unsuspecting users in danger. The development team is struggling and it is facing 51% attacks now.

How can #ETC comply with your “evaluation framework”?

Of course, with a pre-mined crypto like XRP, which doesn’t rely on mining and is distributed under policy guidelines by Ripple, 51% attacks are not a problem. For those which it is, the next few weeks – and whatever time beyond that prices stay depressed and mining interest low – they will have to be on guard against similar attacks, and we may see exchange reconsidering whether some coins are worth the risk to their customers or their business.

As exchanges incur the cost of this 51% attack on ETC (not just in payouts but also operational cost to identify/remediate/communicate), you can bet they’ll be evaluating which other assets are similarly vulnerable.

Brace yourselves, delistings are coming. https://t.co/D19pSOlzsk