The price of Ethereum has taken another turn for the worse, seeing it fall to new lows for the year and levels not seen since May of last year.

In the last few hours, the price of Ethereum has taken another dip downwards, this time below the $120 mark – a level that it’s not seen since mid-May last year. The aggregated pricing of the CryptoCompare Index shows it priced as low as $118.18 against the US dollar in the early hours of Friday morning (GMT) – while on Coinbase, the USD price briefly got as low as $116. 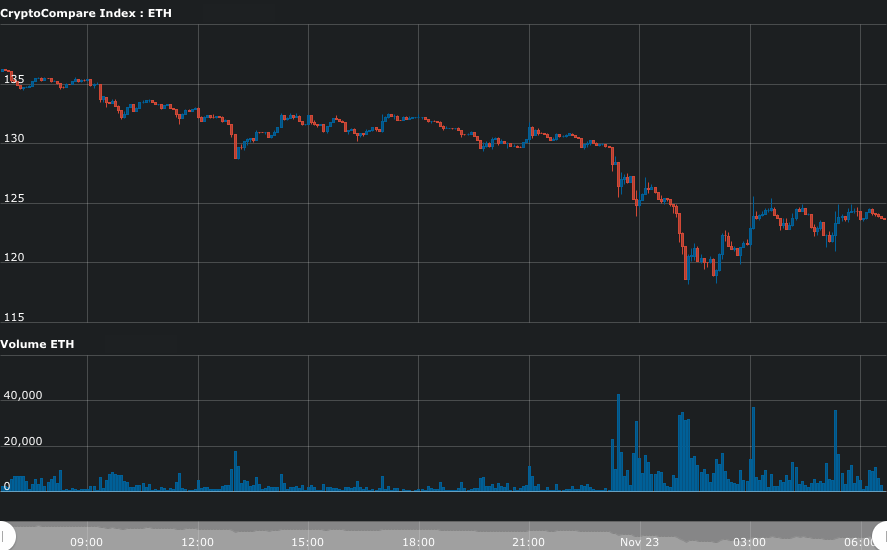 The further decline comes with a further 8.5% fall over the last 24hr for the somewhat embattled crypto, that has been under considerable price pressure since a mid-September dip took it below $200 for the first time in 2018 – a waterline that it subsequently struggled to stay above, until the downward pull of the crypto market as a whole  has seen another 40% wiped off its value in the last 10 days.

Ethereum now stands in third place in the market capitalisation stakes behind Bitcoin and XRP, at a price which marks it down somewhere north of 90% down from it’s all-time high valuation from mid-January of this year. That decline has come on the back of concerns about the limited uptake of Decentralised Applications (dApps) across the crypto space as a whole, as well as challenges from other similar platform blockchains – chief among them, EOS. Ethereum has also seen concerns about its ability to scale to large demand should any mass-adoption of a dApp using its platform occur, and an indeterminate timescale for implementing the necessary protocol changes to cope with such an event.

While sell-offs earlier in the year were initially blamed on Ethereum-based ICOs ‘cashing out’ of the declining crypto in order to ensure that they retained the necessary funds to operate, research by BitMEX asserts that most Eth-based coin offerings had profited enough from Ethereum price rises since their sales, that they were unlikely to be in financial trouble.

However, any ICO with a large bag of ETH still on its books – and reliant on that for funding going forward – is likely to be looking at the markets very nervously right now, however relaxed the team behind the crypto are about the price.

Blockchain Competitors: Why Sticking With Ethereum Might Be Best