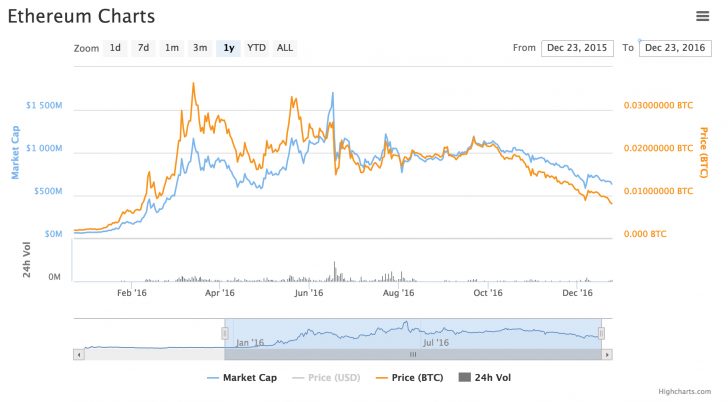 The past 12 months marked a dynamic period for the price of ether (ETH), the cryptocurrency of the ethereum network.

Ether markets experienced sharp price fluctuations over the course of 2016. The digital currency surged more than 2,000% within the first six months, rising from an opening price of $0.93 to roughly $21.50 by mid-June before losing much of these gains during the latter part of the year.

At press time, ETH was trading at $7.27, a figure which itself represents a more than 700% year-to-date (YTD) increase from January.

The digital currency experienced these notable gains and losses as ethereum – a blockchain-based platform for the development of decentralized applications and smart contracts – encountered numerous twists and turns on the development front. Major moments included the release of ethereum’s “Homestead” client, the collapse of the The DAO and the birth of ethereum classic.

The largest price fluctuations took place surrounding the rise and fall of The DAO, as ETH rose to an all-time high in mid-June and then proceeded to tank, falling more than 50% within 48 hours.

Ethereum released Homestead, the first production version of its software, on 14th March. This version followed Frontier, which, as its name plies, was more of a beta program that the developers used to explore the limits of the then-nascent network and uncover bugs.

While this update helped drive development progress, Homestead’s release did not have a positive impact on price. ETH rose to as much as $15.22 on 13th March, but had declined to as little as $8.52 on 18th March, CoinMarketCap figures reveal. 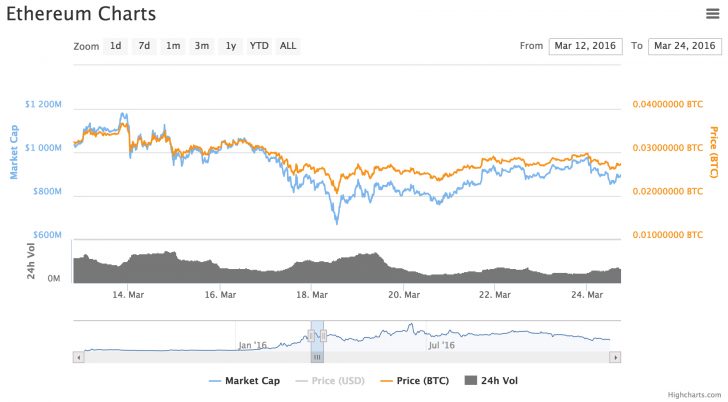 Homestead constituted a major release in the eyes of the market, according to Petar Zivkovski, COO for leveraged bitcoin trading platform Whaleclub.

“Homestead was probably the most anticipated update for ethereum as it provided both stability and legitimacy to the project,” he told CoinDesk. “It opened the doors to more mainstream developers making it easy for them to develop decentralized ‘unstoppable’ applications on the ETH blockchain.”

For 2016 at least, nothing drew attention to ethereum more than the attack on The DAO.

The DAO, which is short for “Distributed Autonomous Organization”, aimed to develop an ethereum-based vehicle through which other projects in the ecosystem could be funded by community consensus. The idea was that participants could purchase tokens and use them to vote for the projects they wanted to fund the most. 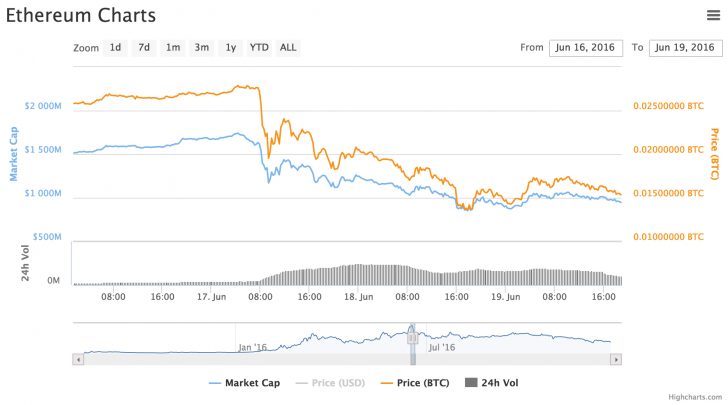 While this project generated significant visibility and collected more than $150m in ether, the situation deteriorated significantly when The DAO was attacked on 17th June. The incident resulted in 3.6m ethers (roughly $60m at then-current prices) being siphoned into a “child DAO” due to an unforeseen exploit in the smart contract underlying the project.

ETH prices reacted violently, falling from an all-time high of $21.52 on 17th June to $9.96 the following day, CoinMarketCap figures reveal.

The ethereum community quickly began debating whether to implement a hard fork, and some members took a more proactive approach by leveraging a white hat attack to remove some of the remaining funds from The DAO and protect them from the continued action of hackers.

Unfortunately, this approach proved insufficient, and the ethereum community implemented a hard fork on July 20th, returning the stolen ether from an account owned by an unknown attacker to a new address by essentially rolling back the network’s transaction history.

ETH prices, on the other hand, didn’t seem to suffer any headwinds because of this event, rising approximately 2% from $12.21 at roughly 14:30 UTC on 20th July (the time the hard fork took place) to $12.45 at 23:59 UTC, CoinMarketCap figures reveal. Transaction activity also rose between these two times, with 24-hour trading volume rising from roughly $51.5m to $60.2m.

The digital currency’s price pushed higher over the next few days, rising to as much as $14.89 on 23rd July. At that point, 24-hour trading volume surpassed $78m.

Perhaps just as unpredictable was the emergence of another ethereum.

While the hard fork averted the dilemma of investors losing millions as a result of taking a chance on The DAO, the move came with some unintended consequences. Some who opposed the move continued using the pre-hard fork network, under the moniker of “ethereum classic”. 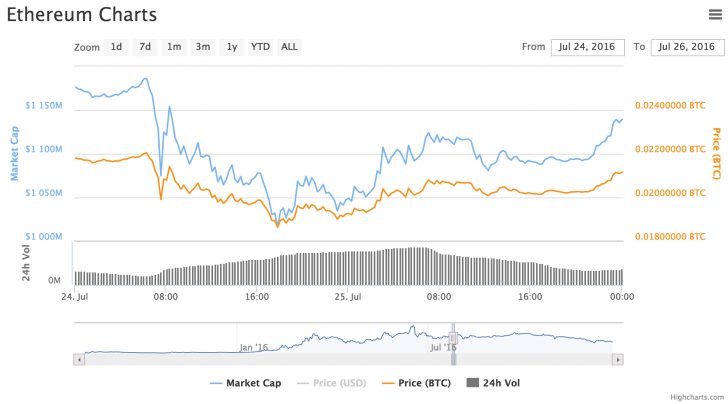 This separate blockchain, with its corresponding cryptocurrency ether classic (ETC), quickly drew significant attention. Its tokens started trading at roughly 13:44 UTC for a price of $0.75 on 24th July, and ultimately surged close to 300% within the first 72 hours, reaching $2.85 on 26th July.

Supporters of the effort say it enshrines the original ideals of the ethereum project prior to the efforts to wind back the DAO collapse, while critics have said the network serves as little more than a vehicle for speculation. Cryptocurrency fund trader Jacob Eliosoff argued that ETC is at risk of becoming a historical curiosity in the absence of deeper development.

Eliosoff went on to acknowledge that “the DAO hack and the ensuing ETH/ETC schism undoubtedly damaged both the project and the price,” but emphasized that he sees a clear path forward for ethereum.

It was a year of hard forks for ethereum.

The network underwent several major changes that required users to upgrade their software this year in an effort to address repeated attacks. Ethereum also experienced a completely accidental fork on Thanksgiving, in which Geth and Parity implemented the logic of a hard fork executed November 22 differently, producing a consensus error.

This “Thanksgiving fork” was quickly flagged, and the event itself seemingly provided little in the way of headwinds for ETH prices, which rose from an opening price of $9.23 to a daily high of $9.66. 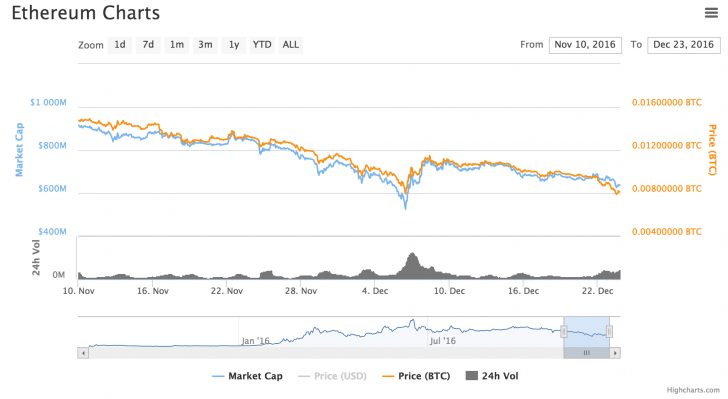 Some observers noted that the number of hard forks that ethereum has undergone over the last year can be interpreted in more than one way. For example, the simple fact that the network enacted all these changes can be interpreted as a signal of its ability to maneuver and therefore produce specific results.

“ETH underwent several hard forks [in 2016]. While this does show flexibility, it also shows a certain lack of stability since a hard fork is essentially an entirely separate system in itself that has to be deployed and updated across all network nodes,” Zivkovkski argued. “It’ll have trouble establishing itself as a long-term currency and autonomous application blockchain if a hard fork is going to come into effect every few months.”