With news that the Satoshi Vision (SV) Bitcoin Cash fork will forego any claim to the BCH and go it alone, its price has exploded against a backdrop of further crypto decline.

In a move that appears to be confounding the otherwise depressed nature of cryptocurrency at present, the newly formed Bitcoin SV crypto has seen a 75%+ boost in its value over the last 24hrs.

Granted, that has not yet bought it back to the levels of valuation it was receiving prior to, and immediately, after its creation – as part of a highly contentious split of the Bitcoin Cash blockchain that also created Bitcoin ABC – but it will nevertheless be a welcome sight to those left holding the two coins in the wake of the so-called Hash War between the two.

The boost comes on the back of significant progress towards a settling of that dispute over the weekend, where – to all intents and purposes – after being rebuffed by his competitors in his previous overtures towards compromise, key SV backer Calvin Ayre appeared to give up the ghost of Bitcoin Cash in a statement.

Coingeek, the Calvin Ayre-owned crypto news site that has become the de facto mouthpiece for the SV side of the Bitcoin Cash spat, carried the news of the ‘concession’ on Sunday. As you would probably expect, however, Ayre wasn’t framing it as any kind of backward step.

here is my formal current view on how to sort the worlds first Bitcoin Hash war out. I call on all exchanges, wallets and payment processors to work with us on this Win/Win settlement plan.https://t.co/WZCjeMMiKK

He also explains that the other major driver of Bitcoin SV, Dr. Craig Wright, and his company nChain is now “happy to leave ABC chain alone if they enact replay protection and do a permanent split,” adding that this is “very convenient as the definition of winning is fundamentally different to each side so there is a win-win solution here.”

However you decide to frame this considerable change of heart, the immediate reaction of the markets has been pretty definitive. The decision of SV to step back from continued hostilities with the Roger Ver/Jihan Wu-back Bitcoin ABC has led to an almost immediate uptick in the trading price of the coin – which has been boosted by a little over 75% in the last 24hrs, and – at the time of writing is trading at around the $115 mark according to CryptoCompare Index.

The gains were even higher at one point, when the coin broke the $120 mark for the first time since November 18th, when it became clear that it was not in a position to take full control of the ABC chain and was losing out in terms of raw hash power against its rival. 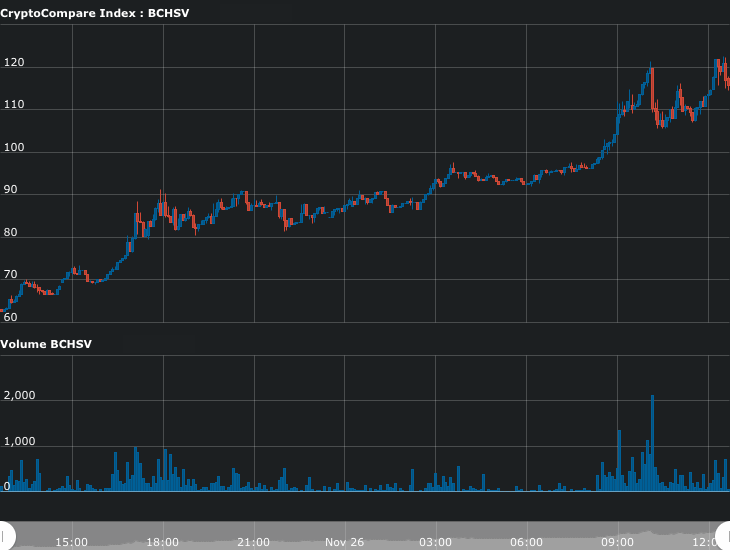 Currently, according to CryptoCompare’s analysis of the range of exchanges from which it derives its index, the BSV/Tether (USDT) pair is the biggest by volume, closely followed by BSV/BTC. Binance is currently the dominant exchange for both of those markets, and is driving the volume up as traders appear to be becoming increasingly confident that BSV will survive going forward.

The chart below – which runs from November 12th until today – illustrates how quickly Binance became the dominant exchange for BSV after it bought trading back online after the fork. Poloniex was one of the few platforms to allow trading to continue through the fork process, but was quickly swamped by interest from Binance traders after it split the coins and resumed trading on November 16th 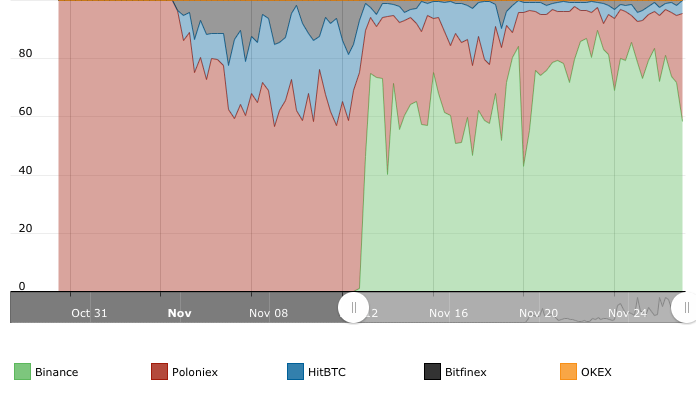 The chart below, which runs from around the time of the fork until today, shows the sudden explosion of the BSV/USDT pair when Bitfinex and then Binance bought trading back online. 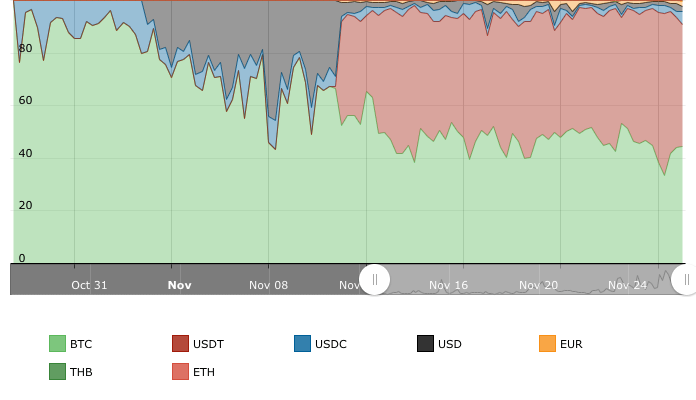 For its part, Bitcoin ABC has also posted a 13%+ boost on the day, as recorded by the CryptoCompare Index, leaving it at just under the $200 valuation. However, there is still some tidying up to be done with regards to the ticker for Bitcoin ABC, with exchanges applying differing policies for whether they will award the BCH name to ABC or operate under a different name. 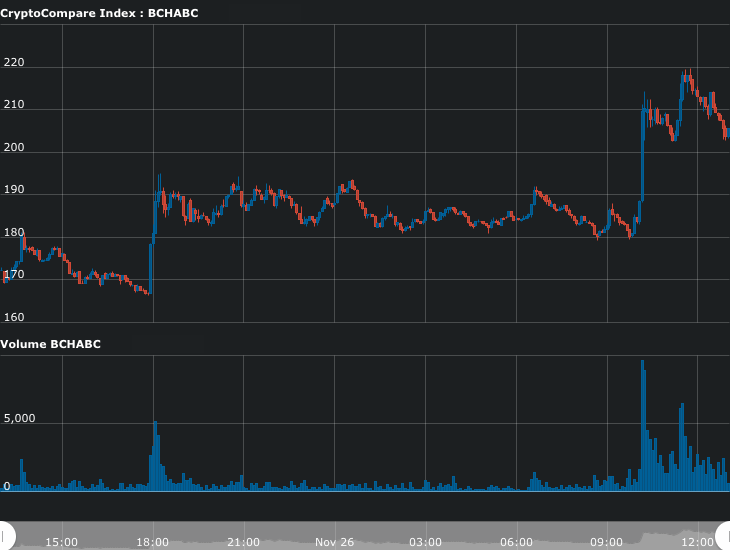 Thus, CryptoCompare still charts a price for BCH too – which is currently around the $214 dollar mark. Hopefully, now things appear to be settling into a new status quo, the valuation of the pair compared to the ‘old’ Bitcoin Cash, can be fully established and some clarity restored.

SpankChain Has Paid Camgirls $70,000 Worth of Crypto in 6 Months