The price of bitcoin is up over $300 from today’s low and now has its sight set on a key technical hurdle that, if surpassed, could spark a stronger rally, analysis suggests.

At 15:00 UTC, bitcoin’s price began its ascent, invalidating what was a narrow trading range between $3,580 and $3,630. The move occurred just above previous resistance from Dec. 18 near $3,550 – a level that now appears to have successfully flipped to support as a result of the latest boost.

It now looks like bitcoin bulls want to revive and extend their rally from just eight days ago when prices were pushed above $4,000 but ultimately failed thanks to a holiday sell-off from a peak of $4,236 on Dec. 24.

At press time, the leading cryptocurrency is trading at an average price of $3,842 according to CoinDesk pricing data.

As can be seen, the price bounced on a confluence of support including the likes of the daily Bollinger band basis line, 61.8% Fibonacci retracement, as well as the prior support and resistance area near $3,500 (green zone).

In order for bulls to now extend the rally towards $5,000, bitcoin’s price must scale the neckline of the widely observed inverse head and shoulders pattern – an indicator of bullish reversal.

The pattern can be described as three successive troughs, the middle or “head” of which is the deepest.

If bitcoin can find acceptance above the neckline, the reversal pattern should take effect, potentially sending the price towards $5,200 which is measured by adding the depth of inverse head and shoulders “head” to the anticipated breakout point. 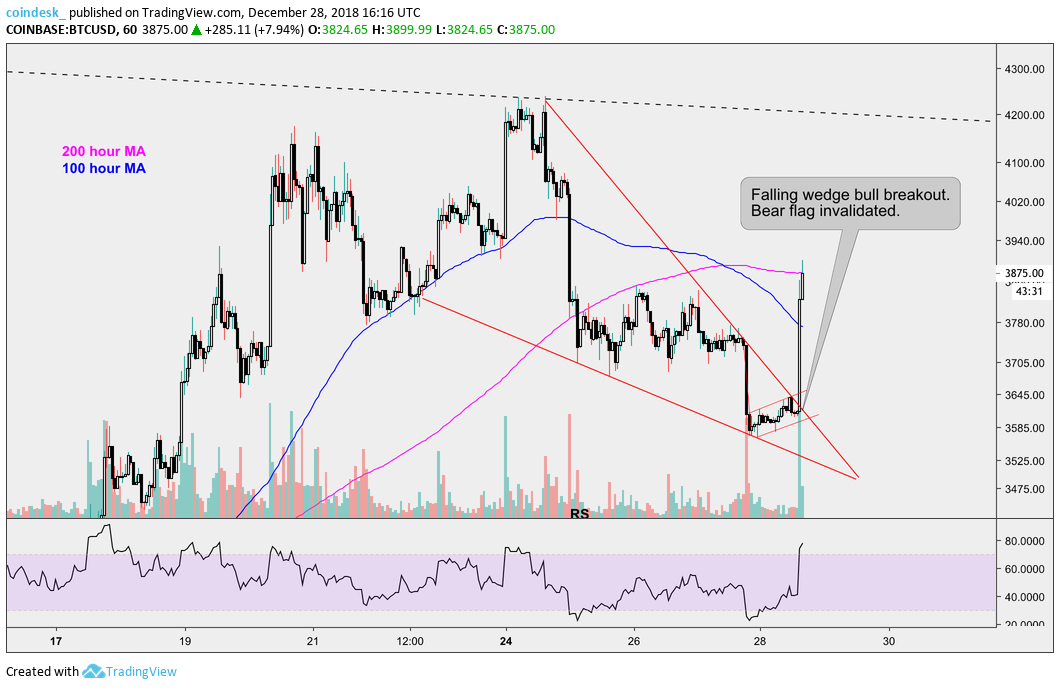 The hourly chart further depicts the most recent bullish development. We can see that a bear flag (a bearish continuation pattern) had formed inside of a falling wedge, a bullish reversal pattern.

It’s safe to say bitcoin’s latest boost has invalidated the bear flag and price now has different resistances in its immediate path in the form of moving averages (MA’s).

As can be seen, price was able to close the last hour above the 100 hour MA – an encouraging sign for the short term bulls, but the stronger 200 hour MA has yet to be conquered.

The relative strength index on the hourly chart is now considerably overbought, so consolidation or a minor pullback in the near term may be the most likely course of action.