The cryptocurrency rose to a high of $4,067 at 09:06 UTC – a level last seen on Dec. 4 – according to CoinDesk’s Bitcoin Price Index (BPI). Its market capitalization also hit a two-week high of $70 billion.

At press time, the world’s largest cryptocurrency by market capitalization was trading at $4,000 – up 28 percent from the 15-month low of $3,122 reached earlier this week.

The recovery rally was overdue as BTC had been looking extremely oversold as its value dropped by 50 percent over the last four weeks.

The bounce in the world’s largest cryptocurrency by market capitalization is again boding well for the broader markets.

As of writing, names like ether, XRP, stellar and litecoin are all reporting 2 percent gains, as per CoinMarketCap data. Bitcoin cash (ABC/SV combined) is up 30 percent and lesser-known cryptocurrencies like stratis and Chainlink have gained 45 percent and 27 percent, respectively, in the last 24 hours.

Meanwhile, the list of cryptos posting losses today includes maker and linkey, both of which are down 5 percent.

Bitcoin’s move above $4,000 validates the bullish setup seen in the short-term technical charts. As a result, the focus now is on the next major resistance lined up at $4,400 (Dec. 29 high). 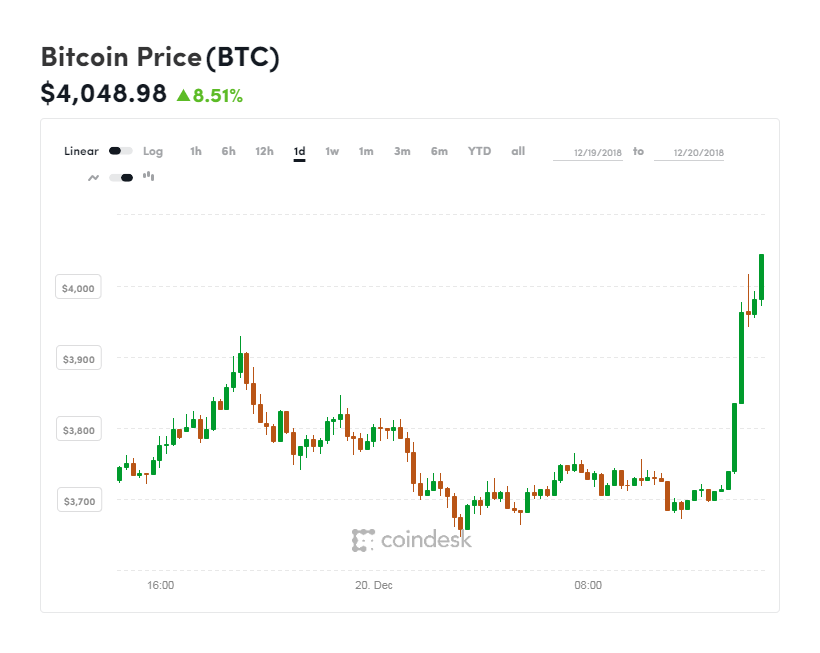 Disclosure: The author holds no cryptocurrency assets at the time of writing.

If You Are For 2019, Here Are 5 Reasons Ripple’s XRP Should Be In Your Wallet