At around 7.30 this evening (GMT), bitcoin reached a new low for the year as crypto prices continued to fall.

7pm-8pm BTC price, according to CryptoCompareAccording to figures collated by cryptocurrency pricing site, CryptoCompare, Bitcoin has just briefly hit its lowest price of 2018, at $5,534. The site, which aggregates its prices from a ranges of exchanges and markets, had previously registered the 2018 low-point for BTC at $5,537 on July 2nd. 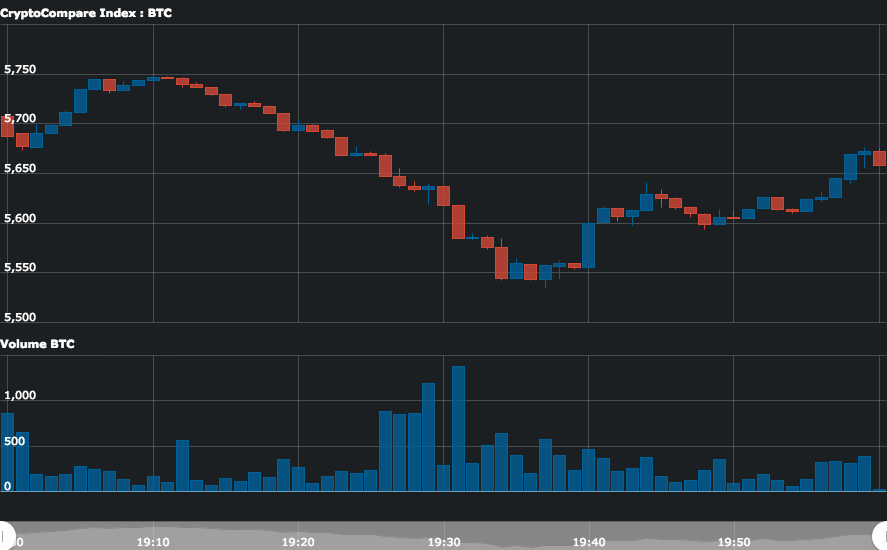 It comes on the back of a day that has seen $25bn wiped of the total market capitalisation of cryptocurrency in general. According to Coinmarketcap, the total value of all the tokens it surveys now amounts to $184.5bn, having been very close to $210bn at midnight (GMT).

As we’ve previously reported, the rapid drop off in price began at around 4.30pm this afternoon, after Bitcoin had lost support at $6,300 dollars – which had propped up the crypto for some time – earlier in the day. The low, though, comes after threats from Craig White to crash the price of Bitcoin with a massive sell-off should he have to fund any hash war after the upcoming fork in Bitcoin Cash – whether or not this has further spooked an already jittery market is unclear as yet, though.

At the time of writing, Bitcoin’s price has recovered somewhat to around the $5,650 mark – but all those predictions of the bottom having being reached for Bitcoin in 2018, have now proved to be wrong, and could be proved more wrong before the night’s out.