After nearly two weeks stagnating at around $6,400, bitcoin (BTC) has finally made a move – to the downside.

At 12:00 UTC, the world’s largest cryptocurrency by market capitalization dropped nearly $200 to reach a two-week low of $6,243.

The squeeze in bitcoin prices had been somewhat surprising, since the cryptocurrency has shown to be correlated with the equities markets which are about to end their worst month since the financial crisis in 2008. As a result, BTC’s move to the downside was perhaps overdue.

The broader cryptocurrency market has also taken a hit over the last few hours, a common occurrence when bitcoin prices show weakness.

Major cryptocurrencies including ether (ETH), XRP and bitcoin cash (BCH) are all reporting 24-hour losses above three percent. Litecoin (LTC) is the worst performing cryptocurrency out of top 10 by market cap, reporting a 24-hour loss of over five percent.

Further, the press time total market value of all cryptocurrencies is down just over three percent on a 24-hour basis, currently being worth $203 billion, according to CoinMarketCap.

While the lengthy period of consolidation has ended in a downward move, there are still several support levels that may help keep the bears at bay. 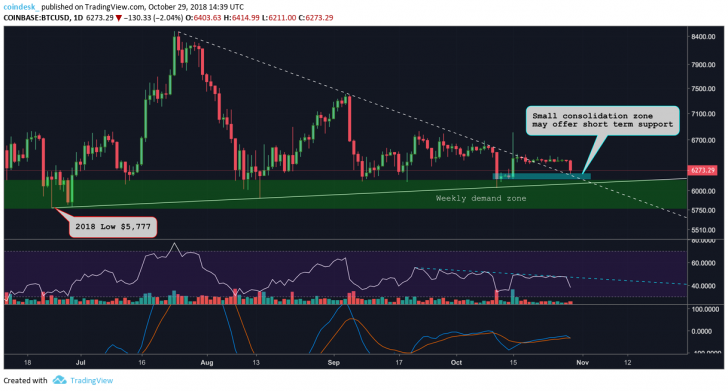 On the daily chart (prices as per Coinbase), bitcoin’s price is currently testing two technical obstacles: the symmetrical triangle resistance (white dashed line) and the prior consolidation zone near $6,200 (blue zone).

Following a breakout, price tends to return to the trendline and test for support – a “backtest” in technical analysis. With bitcoin back at $6,300 (BPI) at time of writing this update, that looks to be the current scenario. A bounce off of the trendline would be considered bullish whereas retreating inside the triangle would embolden the bears.

The consolidation zone that shored up the price for five days before a $700 dollar rally to the monthly high of $6,810 on Oct. 15th may once again look to offer short-term support. If it fails, there’s another chance for support just below in the form of the four-month long ascending trendline (rising white line).

Bitcoin and chart image via Shutterstock