Baton down the hatches, BitFinex is going offline at 10am UTC this morning

Keep an eye on the price of crypto at large exchange goes offline for unspecified time.

Major crypto exchange Bitfinex will go offline for up to seven hours from 10am (UTC, GMT) this morning as its backroom team complete a migration of data away from Amazon Web Services. The move, first announced on December 29th, was confirmed again in a message on the Bitfinex announcements blog.

The move, which staff say will boost “speed, performance and security” will bring down both the main BitFinex exchange and the decentralised Ethfinex concern, during which time there will be no access to wallets – nor any features of the respective platforms. No orders will be executed during downtime; however, open orders will be kept (“regardless of price movements”, the blog says) and resume once the platform is back online.

The blog ads that its users “will not be liquidated during downtime,” but that they should be mindful that “they are at risk of liquidation as soon as the platform is reopened” should prices have moved significantly in that time “and should therefore take necessary precautions.”

Readers may recall that previous downtime for the BitMEX exchange caused extensive ripples in the price of BTC and other cryptocurrencies, and led to accusations of a co-ordinated piece of market manipulation to squeeze those who failed to close short positions on BTC before the work. Interestingly, the last time Bitfinex undertook maintenance that required the whole site to be down, it refused to give an exact time for the changes. At the time it said it would not give “an exact time for the platform update other than the above mentioned broad parameters due to the risk of DDOS attacks, attempted market manipulation and more,” though it seems far less shy about it this time around.

Whether that is down to a new PR strategy or increased confidence in its systems is unclear, just like the effect seven hours without one of the Top ranked exchanges in the world, that handles around $260m a day across 292 pairs, according to CryptoCompare. It would seem that, along with Bitcoin’s recent price boost, this maintenance has bought with it a spike in the number of people holding short positions on the headline crypto right now; so the vultures are certainly gathering in anticipation of Bitcoin failing to hold its new-found price above $4,000 over the coming hours and days, though nothing like to the extent they have been in recent months, when the level of shorting seen on Bitfinex was more than double where it stands right now. 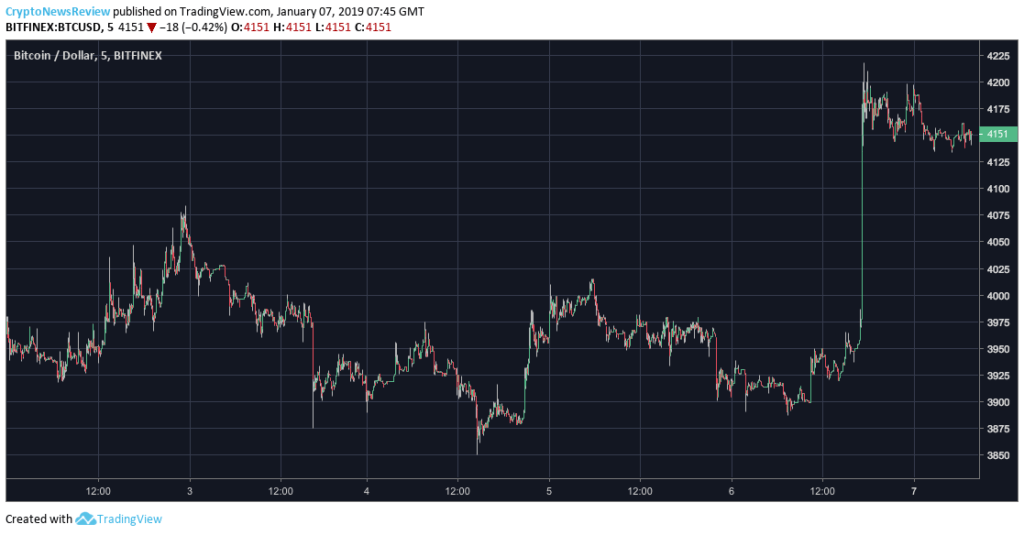 You have been warned, though. Best of luck!

SWIFT and Ripple aren’t partnering – they’re battling each other