Stacks (STX) Price Prediction 2021 and Beyond – Is STX a Good Investment?

Bitcoin (BTC) is the world’s first cryptocurrency that was integrated into the crypto market. What made Bitcoin special was its decentralized blockchain, where each transaction was conducted without the need of a third party. After Bitcoin, more cryptocurrencies were created with the plan of making more services decentralized, such as decentralized finance (DeFi), voting systems, databases, etc. However, despite being the first and most successful cryptocurrency in the world, Bitcoin could not implement these other decentralized services in its network.

A new cryptocurrency named Blockstack was launched to resolve this issue that enabled users to use its smart contracts indirectly within the Bitcoin network. Today, this cryptocurrency is known as Stacks (STX) and has given Bitcoin much more utility as a cryptocurrency. Additionally, Stacks has proved to be a wise investment for some traders so far. If you are considering investing in STX, you need to know some of its features in order to understand what its future goals and price entail. Let’s begin with the main components of Stacks.

What Is Stacks (STX)?

Stacks was founded by Muneeb Ali and Ryan Shea. The former is a computer scientist who graduated from Princeton University. His expertise was enough to develop a plan for Stacks. Initially named as Blockstack, Stacks was funded by private investors such as Winklevoss Capital, Digital Currency Group, etc. It was later rebranded as Stacks so that the name is not confused with Blockstack PBC, which is the team behind the project.

Stacks received large attention when it was first released to the public as it was the first cryptocurrency with a plan of adding new functions to the Bitcoin blockchain without the need of forking Bitcoin. Stacks is a layer-1 blockchain, meaning that is independent of other blockchains

Similar to Bitcoin, Stacks uses Proof-of-Work (PoW) as an underlying consensus mechanism, where the likelihood of being rewarded through mining depends on the power of the mining rig. Additionally, Stacks is the first cryptocurrency to use the programming language Clarity, where smart contracts can be written with it. What makes this programming language efficient is that it is not ambiguous as traditional programming languages.

Even though on its core Stacks is a Proof-of-Work blockchain, it has actually developed its own consensus mechanism named Proof-of-Transfer (PoX). A usual feature of PoW in the blockchain is the burning of coins. In PoX, STX tokens are not actually burned but rather sent to other miners in the network. These STX holders can use their STX tokens in the Bitcoin network and enhance its security. By doing so, they increase the value of BTC, therefore the network participants involved in this process are rewarded with free coins. This process is known as stacking and is different from staking cryptocurrencies. As such, there are two network participants in the Proof-of-Transfer: STX miners and STX holders.

After each round in PoX, Leader elections are held, where a leader node is chosen. The leader is responsible for adding a new block of information in the STX blockchain and mint the rewards for the PoX participants. To win these elections, nodes compete by bidding with Bitcoins. These Bitcoins then are sent to the network participants responsible for the security of the network.

The reward in Bitcoin from stacking depends on the number of STX tokens that a user is holding. The more STX are stacked, the more BTC you can earn. Moreover, there is a stacking threshold that is determined on the current STX participation. This threshold entails that a minimum of STX tokens is required for a user to be eligible for stacking. This spurs people to own more STX. 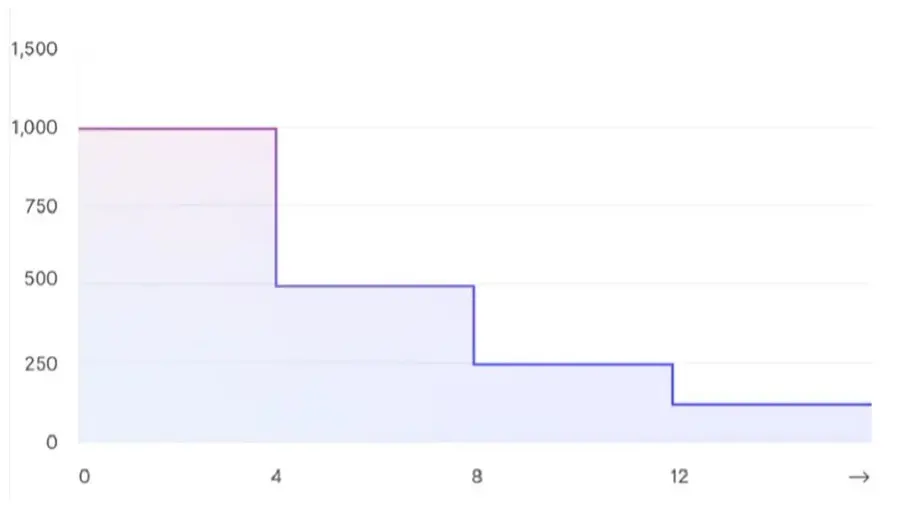 Smart contracts in Stacks can also be used to create and launch decentralized applications and tokenize your own assets. Hence, both fungible and non-fungible tokens can be created within the Stacks network.

As understood, STX tokens are the native tokens of the Stacks network. What makes STX special is that it is the first cryptocurrency token that is approved by SEC (Securities and Exchange Commission). Stacks has a maximum supply of around 1.8 billion STX, and the total supply is around 1.3 billion STX due to burning. As for the circulating supply, around 1.1 billion STX are in circulation.

To buy STX safely, you need to use a trusted cryptocurrency exchange. The best exchanges that support Stacks are Binance, KuCoin, etc.

According to Coinmarketcap, the initial price of Stacks when it was released in October of 2019 was $0.21. The price had a slight decline after a couple of days to $0.19, only to increase again to $0.23. Shortly after that, the price started declining, reaching as low as $0.08 by December of that year. The price went up to $0.12 temporarily, and decrease again to around $0.09.

In February of 2020, the price of STX experienced another increase, reaching around $0.20. By March of that year, the price dropped to a low of $0.05, reaching its lowest ever. The price started slowly increasing again, reaching a new high of $0.31 in June of 2020. By October, the price had dropped again to around $0.15, but then began the longest and biggest bullish run of its history, following the path of its linked cryptocurrency, Bitcoin. 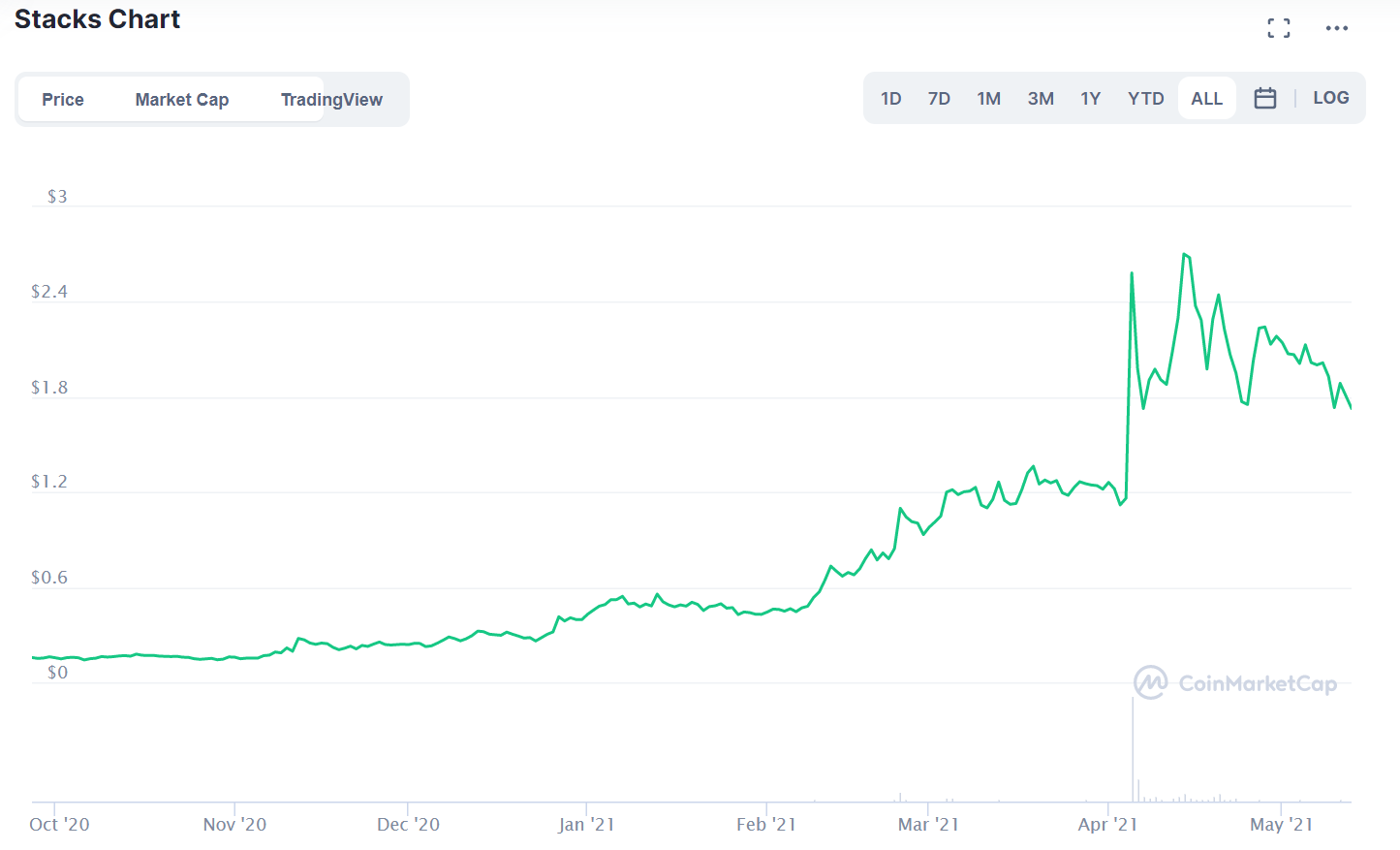 Currently, Stacks’ market capitalization is around $1.8 billion, while the fully diluted market cap is close to $3 billion. Its market cap marks STX at number 71 in the crypto market.

Digitalcoinprice predicts that the price of STX may increase again in 2021, but it might not exceed its highest of all time but only go as high as $2.67 in December. 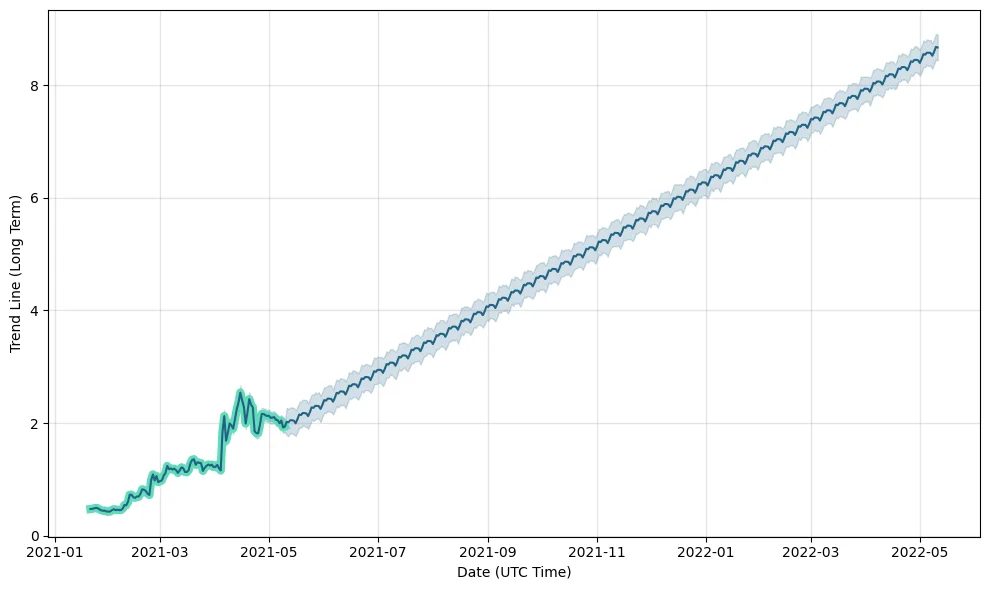 Stacks (STX) price prediction for the next 12 months.

As for Tradingbeasts, they predict that the price of STX can get very close to $3 in the next two months. However, it might start declining again in the remaining months of 2021. 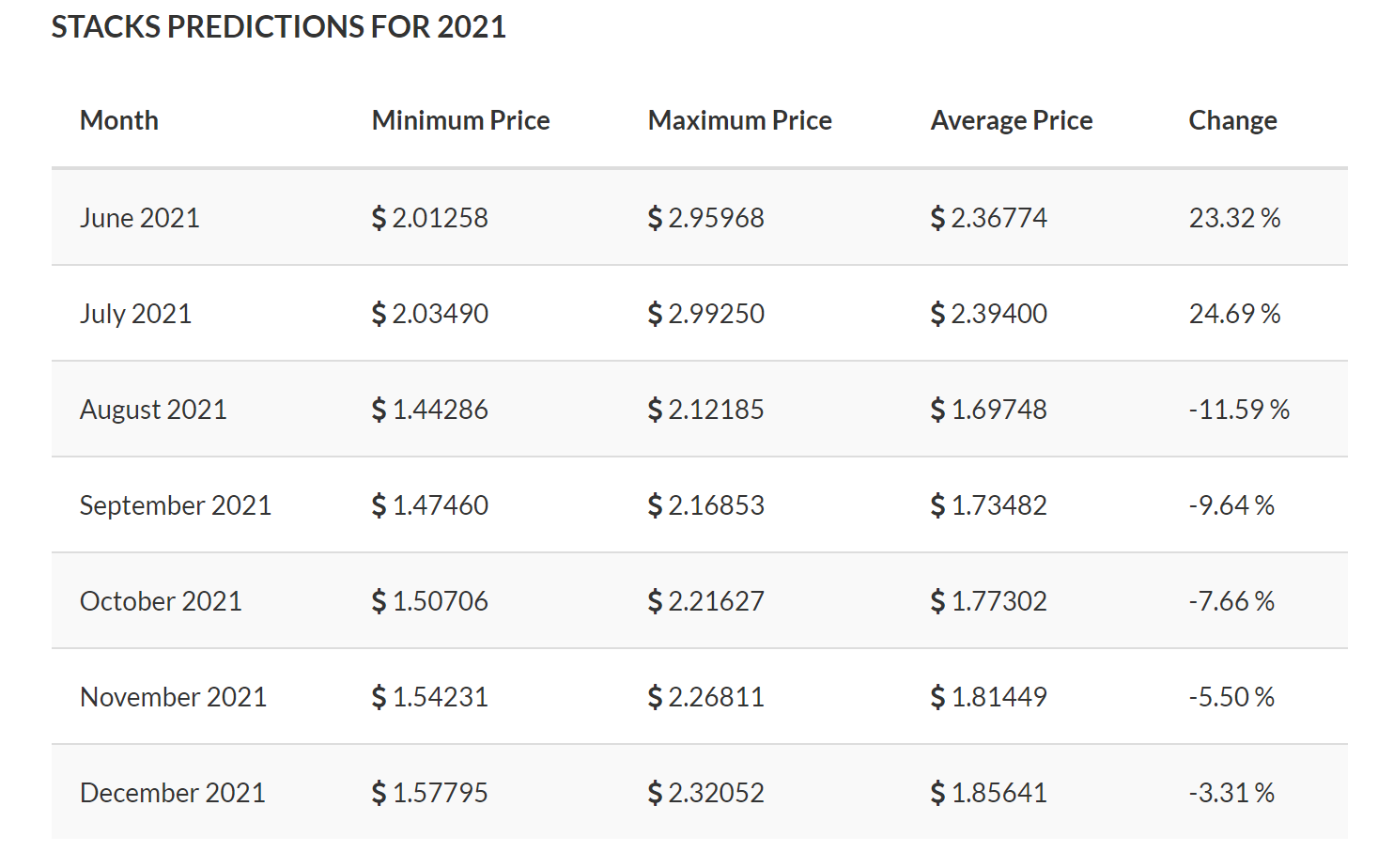 Others, like the YouTube Top Coin, predict a much larger increase in the price of STX. They predict that due to its technology and services in the Bitcoin network, Stacks can go as high as $30 with a market cap of around $30 billion in 2021. While this prediction is very optimistic, it is not unrealistic, so it can happen. 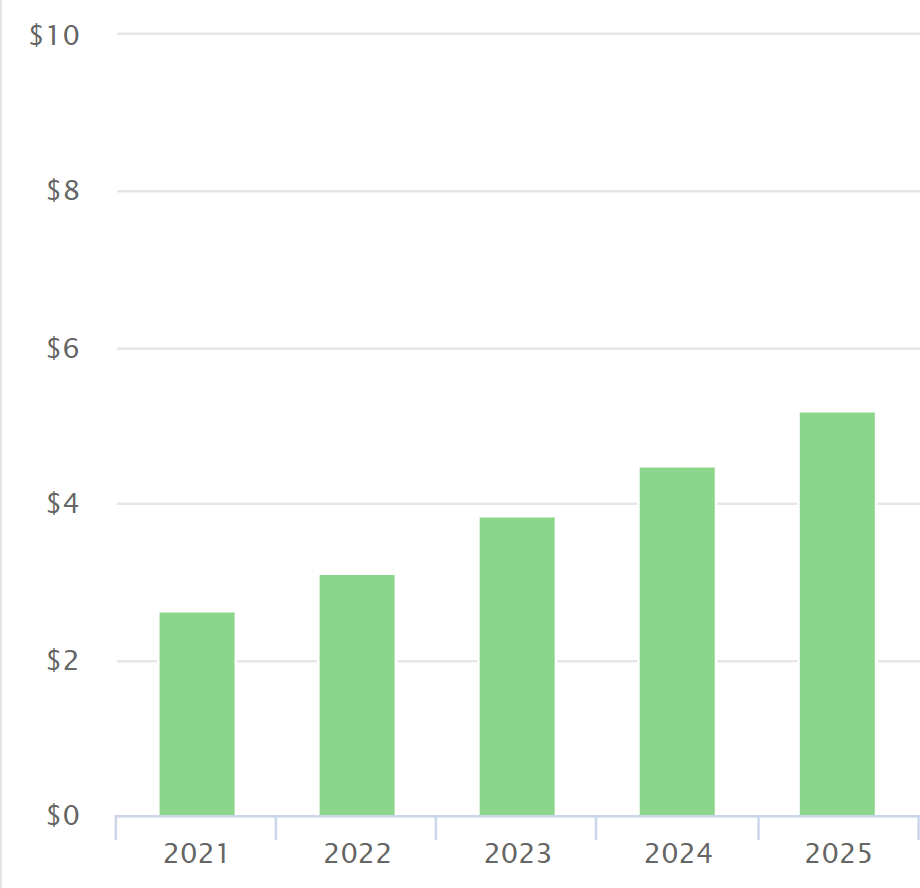 What Potential Factors Can Affect the Price of Stacks (STX)?

But where are these predictions based on? What makes these predictors forecast a price increase of STX in the long run?

Various factors come into play. The main ones are:

Stacks has a limited supply, with a max supply of 1.8 billion STX. With around 62% of the tokens in circulation, its price is deflationary. As its supply becomes scarcer and demand increases, its price may also increase.

Stacks undergo the process of halving every four years. Judging by the likes of BTC, whose price has experienced increases every time it halved, the same could be for Stacks. So halving might be one of the reasons why the price of STX can increase in the long run.

Stacks is heavily linked with Bitcoin. As investors get more aware of the Stacks functionality in the Bitcoin blockchain, they might be more inclined to buy STX tokens. Moreover, since users can earn BTC by stacking, they might buy even more STX tokens. This is all on the basis that Bitcoin remains the world’s biggest cryptocurrency. Nonetheless, BTC is unlikely to fail in the future as it has become one of the best investments of the 21st century.

Stacks is looking to optimize its Bitcoin services even more in the near future. As Stacks improves its network and more investors become interested in its services, its future looks very promising. It is worth noting that the mutual interdependence of Stacks and Bitcoin further strengthens the potential of Stacks as a powerful asset of the future.

Is Stacks (STX) a Good Investment?

Judging by the price history so far, Stacks has proven to be a very good investment. Since predictors and future goals suggest that the price of STX can increase even more in the future, then investing in STX can actually be a very good choice. Not only buying STX, but also mining STX can be very profitable.