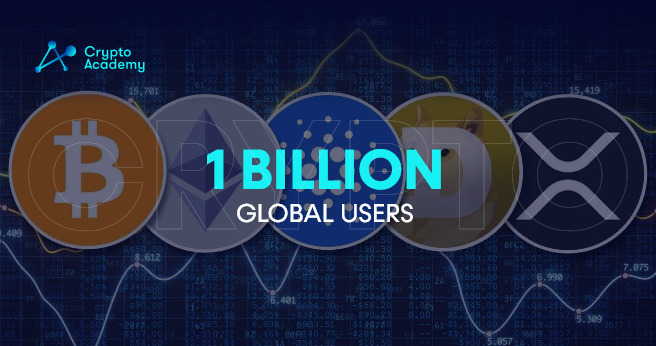 As crypto utilization is experiencing growth each day, the end of 2022 might bring more than 1 billion crypto users. More than half percent of these users would own Bitcoin (BTC).

The attention of people is shifting each day towards the crypto space. This is causing the cryptocurrency market to reach new highs and achieve mass adoption. As the global rate of this market continues to surge, by the end of 2022, there will be over 1 billion crypto users.

There has been a steady rise in interest in cryptocurrencies over the last decade. Historically, the retail sector has driven this adoption, but institutional initiatives have also played a significant role in 2021.

One of the entities that made a historical remark by joining Bitcoin’s journey was the country of El Salvador. The Bitcoin law in El Salvador marked one of the breakthroughs in the crypto industry on a global scale.

As a result of this, the number of crypto users has grown significantly. Corresponding to this, as of December 29th, 2021, there were 295 million crypto users worldwide. Although this statistic is only an aggregation of all users across two dozen centralized exchanges, it still provides a reasonably accurate depiction of the market.

The pace at which the number of cryptocurrency users increases will have a significant impact on the market. Bitcoin is currently owned by around 176 million people globally. This is just less than 60% of the total number of cryptocurrency users. On the other hand, just over 23 million people possess Ethereum, while 23% of the user population owns both Bitcoin and Ethereum.

The most significant month-over-month (MoM) gain in crypto users occurred in August 2021. According to CoinMarketCap, crypto users increased by 15.2% compared to the previous month. This growth was a contributing factor to the cryptocurrency’s remarkable performance in the following months.

In September and October 2021, the month-over-month growth rates were barely 1.1 percent and 2.1 percent. However, compared to August, the growth rate was 15.2%.

Crypto Users Are More Interested in Bitcoin than Ethereum

Bitcoin is maintaining its dominance over the cryptocurrency industry, both in terms of market valuation and the number of people who use it. In July 2021, Bitcoin was held by less than 56 percent of all cryptocurrency users. Bitcoin’s price increased steadily until early November when it reached its all-time user high. As soon as Bitcoin reached its all-time high and started its two-month-long drain, its market share dropped to 60 percent.

Looking back at Bitcoin’s market capitalization, it started to decline from late November 2021, eventually dropping below 40% by the end of 2021. If this downward trend continues throughout 2022, we might see its dominance decline to levels never seen before.

Diving into deeper statistics analyses, we gain different insights. For example, from July to December, Bitcoin users increased by 37.5 percent, rising from 128 million to 176 million. Ethereum, on the other hand, witnessed just a 1.4 percent gain in the number of users over this period.

In addition to the problem of cost, Bitcoin may have attracted more users. During the last year, Ethereum has had to deal with skyrocketing gas fees, which has resulted in very high transaction fees. The high cost of gas on a decentralized exchange may have pushed Ethereum out of the grasp of many small-time retail investors.

Another key role in the lack of adoption of Ethereum may be the Ethereum ecosystem’s complexity. The only cryptocurrency that resembles conventional financial assets in appearance and behavior is Bitcoin. Additionally, Bitcoin has gotten much more widespread coverage than Ethereum, making it more appealing to people unfamiliar with the crypto business. For many new users, this is an ideal entry point into the world of cryptocurrency.