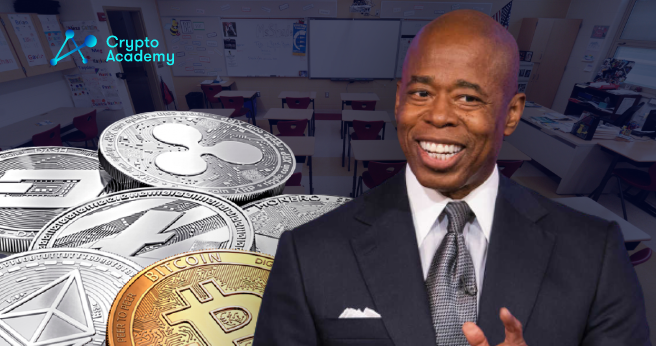 Cryptocurrencies and other digital assets learning could be implemented in New York. This was suggested by the incoming mayor of New York, Eric Adams.

During an interview with CNN, Adams was asked why he wanted to be paid in BTC rather than with fiat currencies. He then mentioned how New York has always been about innovation, and blockchain technology is one of the biggest innovations of the 21st century.

He then adds that blockchain, cryptocurrencies, and digital assets should be taught in schools as the world becomes more reliant on them. They have revolutionized a big portion of online services, and it is not about to stop soon.

Adams acknowledges that cryptocurrencies are a difficult concept to comprehend, and even an expert might have it hard to describe them to someone who does not know about blockchain technology at all. Therefore, he emphasizes the importance of people being educated in such subjects.

Furthermore, Adams states how volatile digital assets can be, where even he was a victim of the market crash and lost money. Therefore, not only investments should be done carefully, but also the future implementation of digital assets, says Adams.

Some critics disagree with the view that cryptocurrency should be taught at schools. For instance, economist Jason Furman has suggested that it is a bad economic strategy and also a bad investment.

Not only is this a bad economic strategy for NYC and a bad investment decision, it also seems like a conflict of interest.

Like a Mayor announcing “I’m buying a lot of Amazon stock and then going to put in places policies to benefit Amazon.”https://t.co/kuSQ06KVj4

Adams then replied that everyone has a unique analysis of digital assets, and that should be respected. He says that I am talking about my paycheck, and others can decide for themselves however they want.

Also read: Ripple CTO, David Schwartz, is bullish on the future of NFTs

Bitcoin Surges to New ATH of $68,500 with Big Money Emerging as the Largest Catalyst