Bitcoin Bounces Back to $41K As Stock Market Confidence Grows 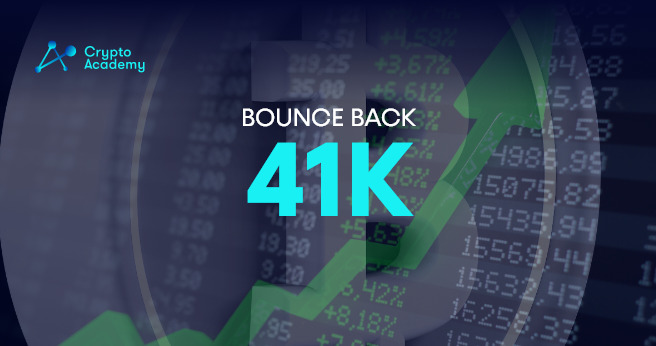 Today’s lack of activity in the crypto markets is tempered by optimism that a macro rebound would bolster Bitcoin (BTC) and Ethereum (ETH) in the coming days. On the 20th of January, Bitcoin rose sharply from $41,000, while bearish looking for a move into lower territory remained disappointed. Since the 11th of January, BTC/USD fell below the $41,000 threshold for the first time.

In a recent tweet, Michal van de Poppe states that the comeback of Bitcoin is good. However, he added that he’d be happier if BTC recaptured the $42.4K range. Additionally, Van de Poppe stated that if another collapse occurs, $38,000 is an arbitrary “ultimate” line in the sand that has to be maintained. Moreover, he added that the final test for Bitcoin is between $38,000 and $40,000. This would indicate that buyers had stepped in bullish divergence for a turnaround.

Similarly, people who had seen U.S. stock prices rise just before the market opened on Wall Street were also optimistic about its present strength.

I don’t trust this #BTC dump

We’re still at the golden pocket, got some bull div & SPX just pumped 40 handles off the low

Think we pump from here pic.twitter.com/O81srkoXWR

There have been reports on expectations for Bitcoin’s performance in connection to the stock market. The famous expert Mike McGlone of Bloomberg Intelligence expects that the association between cryptocurrencies and stocks will continue this year. Some believe that BTC will ultimately “decouple” from its downward trend.

In light of altcoins, the token of Terra Luna, LUNA, was the only cryptocurrency to rise by more than 7%. On the other hand, the biggest altcoin by market cap, Ethereum, has lost 1.2% in the last 24 hours and is hovering around $3,000. According to Van de Poppe’s most recent YouTube video, $2,800 represents a short-term floor for ETH/USD. He believes this floor will generate a “bullish divergence” for pricing in the following days.

More Than $40,000 in Bitcoin Donations Towards Tonga, after Catastrophic Volcanic Eruption