Binance Empowers Afghan Women Through Their Code to Inspire Initiative 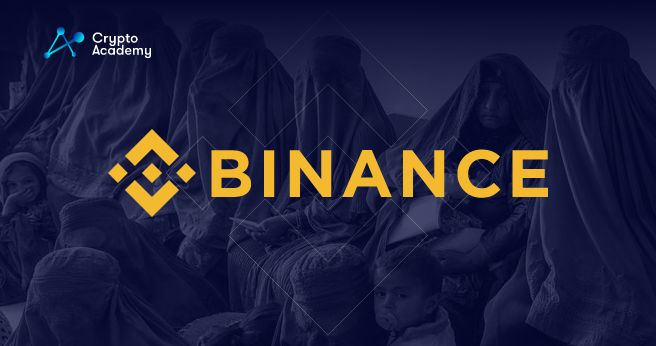 The world’s first successful digital money in the history of humanity is Bitcoin. It is considered the most valuable cryptocurrency in terms of market capitalization. Bitcoin first appeared on the market to free individuals from third-party services. It has now successfully grown into something far more substantial.

Bitcoin has been responsible for the disruption of all market forces. In addition, it has caused the government and other institutions to take note and act accordingly. The most notable event of the last year was the disruption of the art market through the widespread use of non-fungible tokens.

There have been several projects and advancements implemented in the blockchain industry. Nevertheless, the ones that have the most influence are those associated with charitable activity. In recent years, a growing number of businesses and organizations, both crypto and non-crypto in nature, have begun to embrace cryptocurrency. They have adopted crypto to provide good change throughout the world. Equally, the crypto-verse has attracted the attention of celebrities and artists, who are using it to raise funds for charitable causes.

The Use of Crypto for a Positive Impact

Donations in the cryptocurrency industry have been focused on a variety of groups. The list includes cancer groups, coronavirus relief efforts, clean water projects, natural disaster relief, hunger alleviation, etc. In addition, Binance Charity, the blockchain-based charitable foundation of Binance is the industry’s pioneer in this field. Lately, the group has taken a step that no crypto organization ever attempted. The initiative involves Afghanistan’s humanitarian situation to give assistance to them.

Binance Charity announced a collaboration with Code to Inspire, a non-profit organization located in the United States, in December 2021. The organization’s mission is to assist and empower Afghan women. In addition, it aims to offer them access to technical education and employment opportunities.

In light of this collaboration, Fereshteh Forough, an Afghan immigrant, was the main driving force behind the organization’s establishment. Afghanistan was where Forough earned her Bachelor’s Degree in computer technology. Following on, she went to Germany to obtain her Master’s degree.

Details About the Binance Charity Project for Afghan Women

Binance Charity has agreed to collaborate with the group on a three-month trial initiative. The primary goal is to offer assistance to 100 young Afghan women. The focus lies on those women who have been displaced from their employment and denied access to school. All of this has resulted because of the Taliban dictatorship.

According to a conversation with the head of Binance Charity, Helen Hai, Forough emphasized the power of this project. She claimed that this drive will help 100 families survive in Afghanistan’s current situation. Furthermore, Forough explained that most of her students were the primary source of finance in their families. However, given the current political climate in the nation, their access to financial resources has been severely restricted.

When asked about the cooperation with Binance Charity, the founder said that both organizations agree in terms of principles. This partnership provides:

The History of Taliban

The collapse of Afghanistan in 2021 is a topic that everyone is aware of. After over two decades, Afghan women, men, and children are losing their democratic rights in the hands of the Taliban.

One of the primary worries expressed throughout the world was what would happen to women’s rights under the Taliban administration. During the Taliban’s reign in Afghanistan in the 1990s, essential womens’ rights were denied. Women did not have the right to attend school, make a living, or even leave home without the presence of a male companion. However, this time the Taliban promised that the situation would be different. Accordingly, women’s right to educational opportunities would be protected under their government.

According to Fereshteh Forough, girls in secondary school, high school, and public colleges are not attending their lessons. She also claims that female lecturers are not showing up to their classrooms. Additionally, Forough adds that the government is shutting down the safehouses established for women who are victims of abuse. As a result, their life is put in jeopardy. On the other hand, a group of women activists, human rights defenders, and journalists are being targeted because they want to make them “invisible.”

She further pointed out the invasion of Afghanistan from the U.S. in 2001, and they overthrew the Taliban. During the past two decades, people have had the right to travel, get an education, and work. But now, suddenly, everything is different, and they are uncertain about their future. Similarly, Human Rights Watch thinks that Afghan women are losing their rights and taking risks that could end their lives. Furthermore, an article by the United Nations says that it will get worse from here on out.

Blockchain as a Solution From the Financial Crisis of Afghan Women

As the rest of the world has turned its backs on Afghans, it looks like technology has come up with a solution to the financial crisis and global inclusion. Additionally, technology has proved to be a tool for empowerment when girls’ safety is at risk. It is worth mentioning that even going outside could be dangerous for girls.

According to Forough, students get their education from home because all classes have moved online. An excellent opportunity for making money seems to be on the horizon. Women can benefit by safely accessing a global economy and engaging with it.

In a statement, she noted that they provided them with laptops and internet connections. The two crucial things to enter a job. Moreover, they will receive their pay in cryptocurrency and have the option to withdraw their funds at any time.

As many women are the only breadwinners in their families, the partnership with Binance Charity has made it possible to receive money confidentially. As a result, they are now aware of the available financial inclusion prospects in this arena. Even the non-fungible token phenomenon, according to Forough, has helped their cause. It has helped by introducing women to a market where they can make money from their work. Also, some NFT celebrities continuously contribute to the organization’s effort.

Forough also shared a message that two girls sent her. Because the blockchain is transparent and virtual, they felt safe and didn’t fear someone would take the money from them. Moreover, they also felt powerful because they had learned something new. Binance’s slogan is “Leave no one behind,” and the influence on Afghanistan’s ecosystem may be measured over time as a result of this endeavor.

Is BTC Ready to Take Off? The Top 5 Undervalued Cryptos to Add to Your Watchlist