Beyond Price: Why We Need a Better Way to Value Crypto Assets

Michael J. Casey is the chairman of CoinDesk’s advisory board and a senior advisor for blockchain research at MIT’s Digital Currency Initiative.

The following article originally appeared in CoinDesk Weekly,  a custom-curated newsletter delivered every Sunday exclusively to our subscribers.

The most commonly cited number for comparing the worth of different crypto projects is market capitalization. It is an extremely flawed metric.

Critics note, for example, that poor liquidity, combined with lax rules at many exchanges, let founders and large holders easily manipulate market cap quotes at sites such as CoinMarketCap. This made for all sorts of abuses during the ICO mania of last year.

But there’s a deeper, philosophical problem with market capitalization. Because it’s benchmarked in dollars, this measure (which simply reflects a token’s price multiplied by the number of issued tokens) implicitly judges the success of each crypto project in terms of some expected future fiat currency “exit.”

For an industry rooted in efforts to reinvent money and create alternative, non-fiat forms of value exchange, that’s a contradiction. And it encourages bad behavior.

Prioritizing the dollar-based return on investment fosters communities of coin-pumping fanatics, rather than those of passionate software and business developers focused on building successful decentralized crypto-economic projects.

Yet the day traders and YouTube advisors, ubiquitous as they are, do not hold a monopoly over crypto culture. There are still plenty of people drawn to this technology for reasons other than making a quick buck flipping coins.

More than any other type of asset, crypto tokens are defined by the communities they attract: ad hoc collectives of individuals motivated by a freely formed belief in an idea, a unique proposition for decentralizing an economic ecosystem. Not every token’s core idea is a good one, of course, but the point is that the enthusiasm in the idea is a key determinant of a project’s value.

That passion also varies greatly, especially in the degrees to which it manifests as a real commitment to developing the technology and the community. If we are to truly measure the value of these assets, we must also find ways to quantify those qualities, which are, by definition, independent of each token’s dollar-based price.

This is why I’m excited by the CoinDesk data team’s launch of its Crypto-Economics Explorer. Not only does it use a more relevant crypto benchmark than the dollar – bitcoin – it also downplays the significance of price itself as a measure of value.

The Explorer offers a weighted, multi-dimensional representation of value incorporating a variety of objective measures of engagement and interest in each crypto project. Price/market cap is just one of five chosen dimensions. The others are developer activity, on-exchange transactions, on-blockchain transactions and social media activity.

If you compare each coin through this lens – give it a shot; this easy-to-use tool includes a useful zoom function – you’ll find that it opens a whole new way of understanding the particular drivers of community engagement and communal interest in each project.

Zcash, for example, is heavily skewed toward developer engagement, presumably reflecting the passion that many cryptographers have for the pro-privacy zero-knowledge-proof technology that underpins the coin. But it has very few transactions and very little social media engagement.

The profile for XRP, by contrast, is dominated by social media engagement, perhaps reflecting the “XRP Army’s” vocal presence on Twitter and other sites, as well as the fact that much development is done in-house by Ripple.

Ripple critics might be tempted to see this as proof that XRP is all show and no substance. But by the bitcoin benchmark-based terms of the Crypto Explorer itself, community development is an important factor in any crypto project’s value, and social media is a relevant proxy for that.

Already, critics have attacked the choice of bitcoin as the benchmark, presumably viewing that status as supporting the biases of so-called “bitcoin maximalists.” 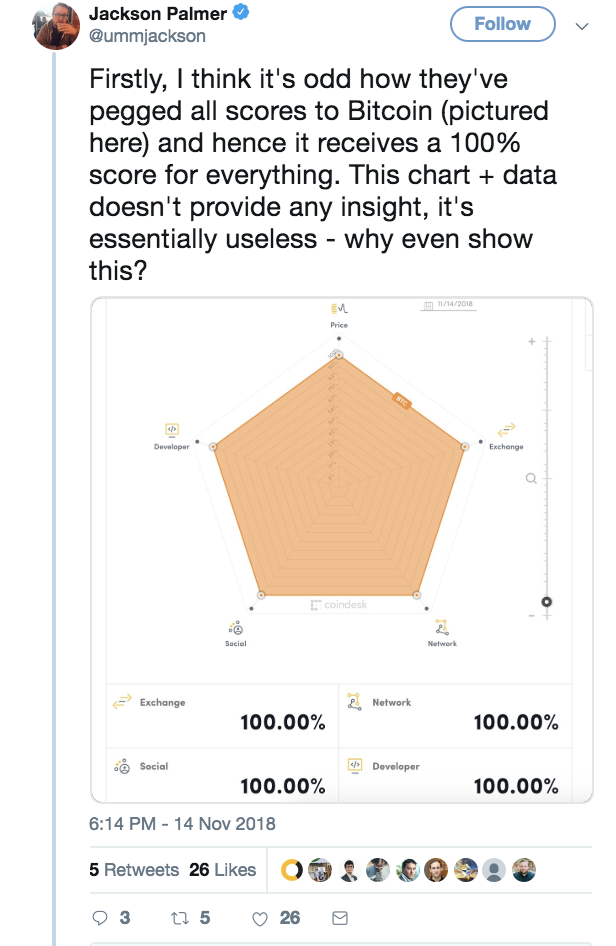 A benchmark that’s built on some kind of weighted average of all coins might have assuaged such concerns, but that would be unnecessarily complicated. It’s important to note that the 100 percent score for bitcoin on all five dimensions doesn’t reflect an absolute; it is simply a basis for comparison. As explained in backing documents, it is perfectly possible for a competing coin to outscore bitcoin on any or all of those metrics – in other words, to get more than 100 percent.

The model is, in this sense, no different from that of world foreign exchange markets, which use the U.S. dollar as their benchmark. On a purely numerical basis, one could say the British pound and the euro – currently at $1.28 and $1.14, respectively – are both “worth more” than the dollar. Of course, that would be meaningless. The point is to have some basis for comparison in time.

In choosing a benchmark, CoinDesk had to start somewhere. And, by the measures chosen, bitcoin is without a doubt the granddaddy of crypto coins. In the future, perhaps some other composite could be used in its case. But for now, this is a perfectly good starting point for a model of comparative value.

Still, it’s important to note that, as with any standard of value, the choices made in the Crypto-Economics Explorer’s methodology are, by definition, arbitrary. They are not based on some absolute truth.

The good news is that CoinDesk regards this project as a work in progress and, in the words of Editor-in-Chief Pete Rizzo, is inviting the community leaders to “beat our tool up. Kick it to death.” Collaborative iteration will lead to an ever-improving model.

So dive into the methodology. Perhaps you can think of an alternative benchmark to bitcoin. Perhaps there are good arguments for changing the weightings within each category. Should mining revenue account for more or less of the 20 percent at which it is currently weighted within the Explorer’s “Network” measure? Are there other metrics that are relevant to measure developer activity beyond the eight GitHub-derived numbers?

This is a starting point, not an end point. But it’s a great place to start reframing the conversation around what we should be valuing in the cryptocurrency universe.

And the timing couldn’t be better.

No. Not because the dollar prices of crypto assets tanked last week and we need some other, non-price distraction, but because institutional investors are on the verge of entering the market and it’s vital that they set aside their dollar-centric valuation models and recognize that value is a different concept in the crypto world.

These new big players talk about crypto as “a new asset class” – as if crypto tokens are just an alternative store of value, not too dissimilar to a stock, bond or commodity, that will one day bring them dollar returns when they cash out back into fiat. Yet what they’re really “buying” by investing in a crypto token is exposure to the whims of a community who’ve formed around a core idea. And quite often that idea has as its objective the disintermediation of the very institutions from which this new breed of investors comes. There’s some confused, contradictory logic in investing in something that’s designed to kill you.

Regardless, the deep pockets of these investors have the potential to add significantly more volatility to the single metric of price for many token projects. So, as even more attention goes to the traders, it’s great that we have a model with which to point out that there are other ways of looking at this industry other than with dollars.