As of this writing, BTC remains almost 39% off its November peak, and we have not seen any catalysts for growth to propel it to new all-time high.

However, there are signs that the market is in an accumulation phase. Institutional investors continue to buy Bitcoin. This is confirmed by the recent transaction history for the two largest Bitcoin wallets.

Additionally, USD Tether activity, often regarded as a reliable gauge of Bitcoin price movement, points towards a BTC bull run. The number of daily active addresses on the Tether network has fallen to a two-year low. 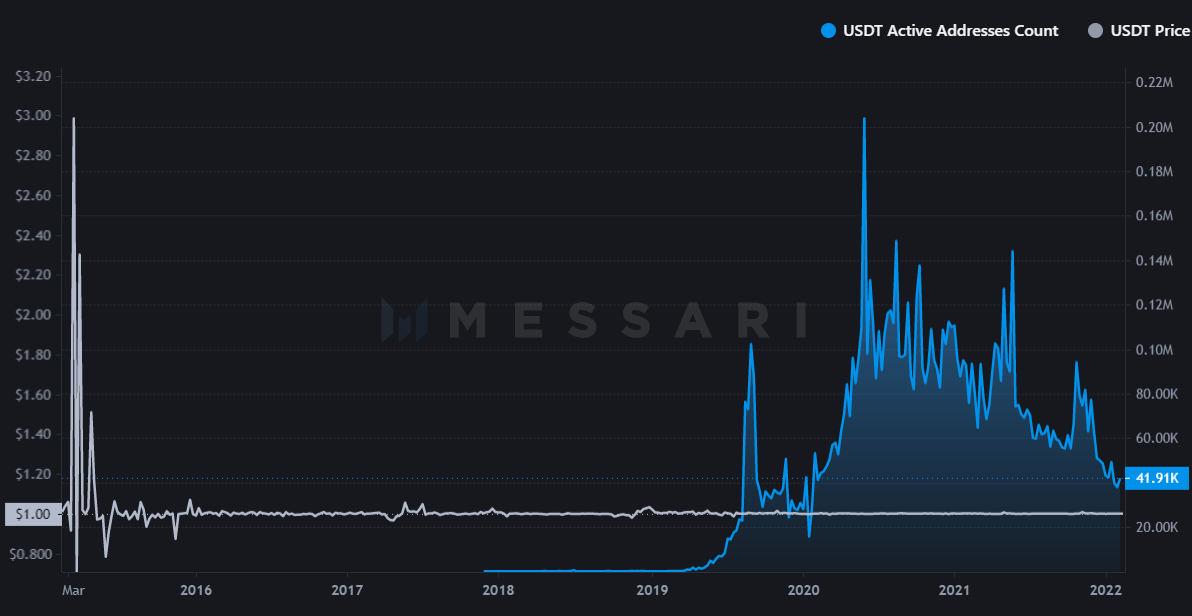 It has historically happened that a drop in stablecoin transactions occurs alongside a rally in Bitcoin prices.

So don’t let the sideways consolidation fool you into thinking this is a bear market. There’s a rally around the corner.

What we need is a catalyst to spur growth. And there are reports out there that could serve as one.

BlackRock, the world’s largest asset manager, which manages $10 trillion in assets for institutional investors, is setting its sights on the Bitcoin and cryptocurrency market.

BlackRock’s clients, including public pension schemes, endowments, and sovereign wealth funds, will be able to trade cryptocurrency through its investment management platform. 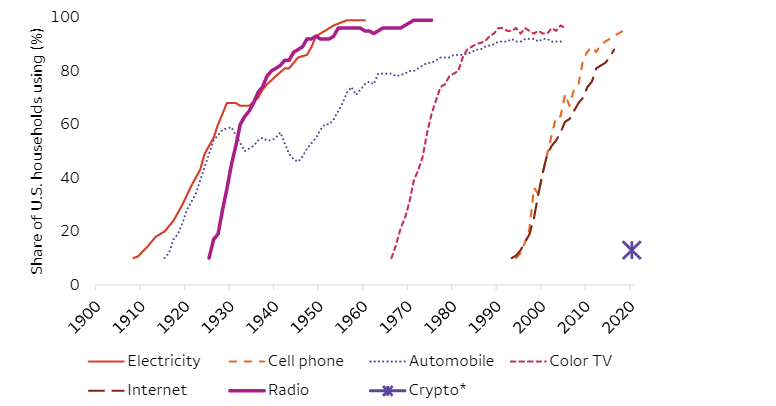 “The chart highlights the adoption paths of select technologies — new for their time — by U.S. households. Rising lines indicate a growing percentage of U.S. households using these technologies. Adoption typically started slowly, hit an inflection point, and then steeply accelerated. As an example, the internet was invented in 1983, yet by 1995, only 14% of Americans (and less than 1% of the world) were using it. Interestingly, these adoption percentages are similar to what we are seeing today with cryptocurrencies. Thirteen percent of Americans purchased or traded cryptocurrencies in the past 12 months, according to a recent survey by the University of Chicago. And roughly 3% of the world uses cryptocurrencies, according to Crypto.com,” the report said.

Overall, the cryptocurrency market has entered recovery mode, holding beyond the $40K resistance level. Bitcoin will continue to take cues from what is happening on Wall Street, so keeping track of stock markets is crucial since the markets are so closely correlated.

As it stands, the combined DeFi market cap currently exceeds $111.04 billion, making it a significant player in the crypto market.

The crypto community is used to volatility, but at the same time the large cryptocurrency market is littered with ‘deadcoins’ – tokens which failed and ceased to exist. We need to pay attention not just to winners, but also to losers, filtering out a coin’s red flags from just volatility noise.

Synthetix is a derivatives trading platform that provides on-chain access to both crypto and non-crypto assets. The protocol uses the Ethereum blockchain to offer users access to synthetic assets (synths). A synthetic asset is essentially a tokenized derivative that mimics the value and provides returns on underlying assets without requiring direct holding. 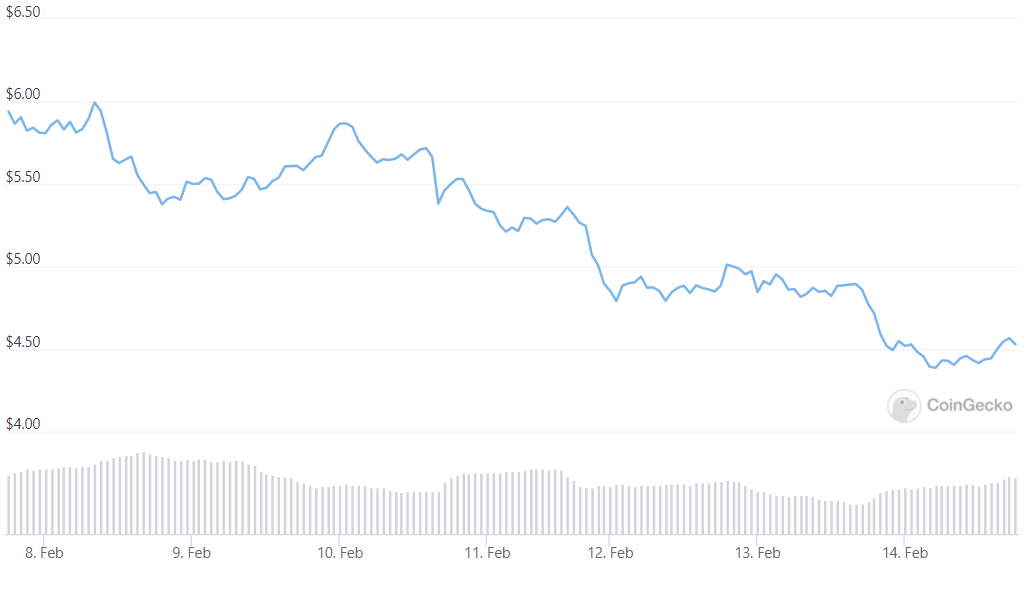 Price predictions for Synthetix Network Tokens mostly forecast a decline to as low as $2.307 by the end of 2022.

Nevertheless, synthetic assets as a class are quite promising in the long run. Tokenizing physical assets appears to be one of their most interesting features. Imagine buying a token that tracks the S&P 500, and then using that token as collateral in other DeFi projects. It could be extended to stock benchmarks, commodities, or debt instruments.

Now, let’s look at that last point – it gets really exciting here. The day isn’t far from when we can trade through synthetic assets exotic instruments like pop culture markets, meme markets, personal token markets, etc. Given that any asset can be converted into a synthetic version and put on a blockchain, the implied market size is substantial.

Several tokens associated with money market Wonderland developer, including TIME, plunged in late January after Wonderland’s pseudonymous co-founder was revealed to be Michael Patryn, one of the co-founders of failed crypto exchange QuadrigaCX. Patryn co-founded the cryptocurrency exchange with Gerard Cotten in 2013 that reached its apex in 2018 with over $2 billion in trading volume. However, Cotten died tragically, taking with him keys to wallets for nearly $190 million worth of cryptocurrency.

There were soon conspiracy theories circulating about the circumstances surrounding Cotten’s death. Moreover, some investigations at the time revealed Patryn was actually one Omar Dhanani, a convicted felon involved in credit card scams and identity theft.

TIME’s sell-off was triggered by fury among the broader crypto community because a convicted scammer continued to hold the keys to a treasury worth hundreds of millions of dollars. 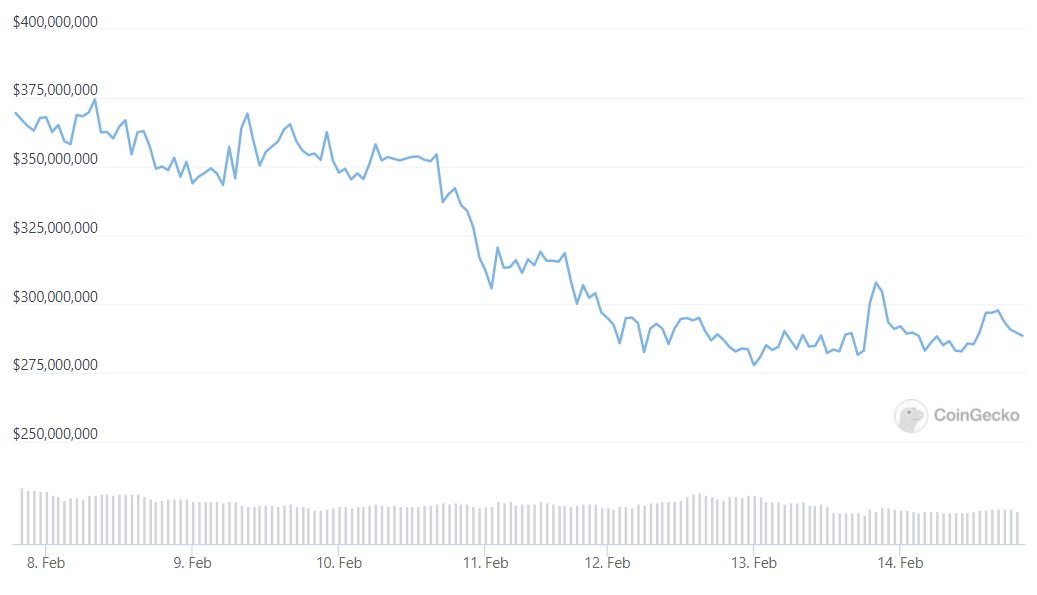 It is easy to guess from the name that Insure DeFi is used to insure your crypto portfolio by buying SURE tokens with fiat and other cryptocurrencies.

Insurance premiums are based on a Dynamic Pricing Model that utilizes Chainlink to distribute crypto ownership risks across a liquidity pool. At any given time, the amount of capital required to back the risks is determined by the market price of SURE. 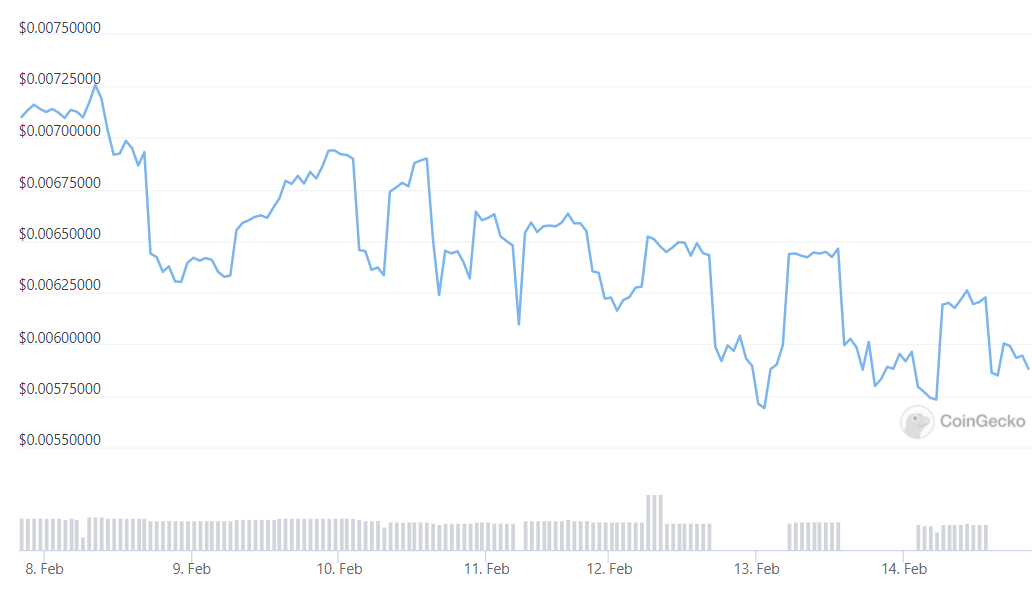 SURE lost 21% week-on-week and over 30% on a monthly basis. However, as it’s still up 68% annually, it seems like we’re just seeing pure volatility.

However, using insurance solutions for the crypto space to stabilize and protect crypto portfolios would be a good investment in the long run amid growing fear of crypto losses.

The information provided in this article is for educational purposes only. Cryptocurrency investment involves a high degree of risk, so it should only be undertaken by people who are able to sustain the loss of their entire investment. This article was first published on CoinTelegraph.