The week has just begun, and the Ripple and XRP community already have a lot to celebrate these days.

Coinbase announced that XRP would be listed on Coinbase Pro and the announcement caused a massive fuss and excitement.

This was a highly awaited announcement, and the exchange revealed that the launch would initially reach users in the US, the UK, Australia, Canada, Singapore and supported nations in the EU.

“After 10 am on February 25, 2019, we will begin accepting inbound transfers of XRP to Coinbase Pro. We will accept deposits for a minimum of 12 hours prior to enabling full trading,” Coinbase announced.

They continued and told users: “Please note that inbound transfers require the specification of an XRP destination tag. Once sufficient supply of XRP is established on the platform, trading on the XRP/USD, XRP/EUR, and XRP/BTC order books will start in phases, beginning with post-only mode and proceeding to full trading should our metrics for a healthy market be met.”

The crypto exchange said that it’s continuously working to enhance the number of tokens that get listed, but they do have to meet the exchange’s standards.

Back in 2018, they said that they plan to add thousands of tokens to the platform in the long run.

The news that Ripple‘s token would get listed on Coinbase Pro triggered a huge price surge all of the sudden as you can see in the screenshot from CoinMarketCap. 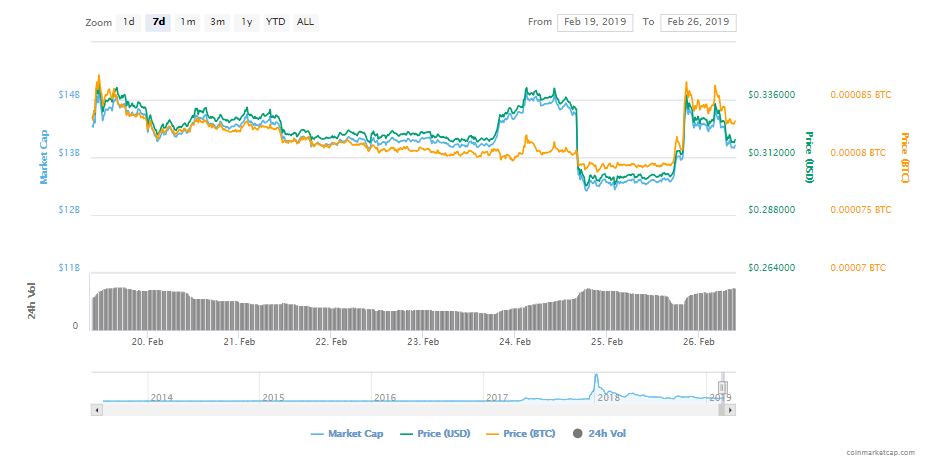 “Data collected by CoinMarketCap shows that XRP’s market cap has surged upwards by more than $2bn by press time. So far the coin’s total value has increased from $12.8bn to $13.9bn in the past hour, a rise of more than $1.1bn,” Cryptobriefing was announcing yesterday.