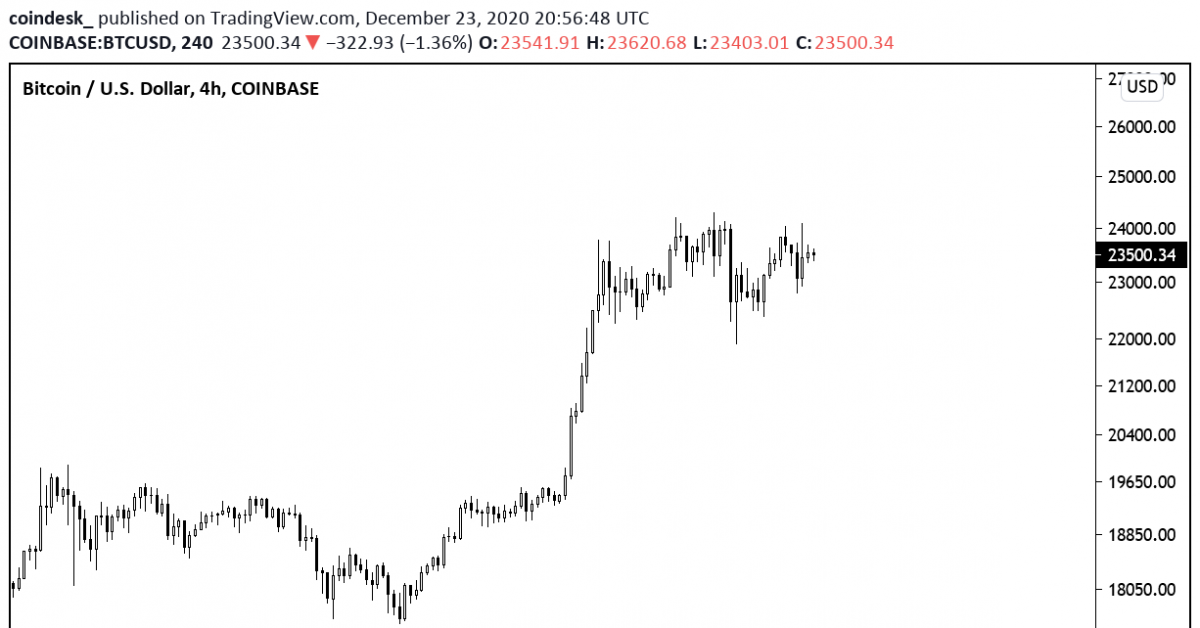 Bitcoin’s price continues to trade below $24,000 as legal action against Ripple Labs rattled the XRP market. Bitcoin is the only asset in the CoinDesk20 with a positive 24-hour return as of 4 p.m. ET.

Despite its monster rally through the fourth quarter of 2020, bitcoin’s volatility has stayed low. There was a slight increase in December as bitcoin continued setting new record highs, but 180-day volatility has been sitting at its lowest levels since February 2017, per data from Coin Metrics.

Where the price heads next is anyone’s guess. But on Twitter, Ki Young Ju, CEO of cryptocurrency data provider CryptoQuant, shared his bullishness, saying, “BTC will break $25,000 without retesting $21,000.”

Part of the reason for Ju’s prediction are the large outflows from Coinbase, which could be viewed as transfers to Coinbase cold storage following new over-the-counter deals for institutional clients.

Sharing Ju’s market outlook, Zoran Scekic, managing partner at cryptocurrency trading firm Zorax Capital, also took to Twitter, calling bitcoin’s market conditions a “consolidation or up” trend. Regardless of what it’s called, bitcoin’s current trend has resulted in over 200% year-to-date returns, with a roughly 20% gain so far in December.

Along the way, bitcoin’s correlation to traditional markets has continued to weaken, per data from Coin Metrics, with the 90-day correlation between bitcoin and the S&P 500 stock index at its lowest level since just before the market crash in March 2020.

Following news of the SEC lawsuit against Ripple, XRP investors are facing a very un-merry Christmas weekend. The fifth-largest cryptocurrency by market capitalization crashed more than 40% Wednesday as of 21:00 UTC (4 p.m. ET), trading hands around $0.27.

Some organizations are taking a wait-and-see approach to this news, such as Ripple partner MoneyGram, which said it has yet to see any “negative impact” on its business arrangements with Ripple following the SEC lawsuit.

But some investors aren’t being as patient. Cryptocurrency money manager Bitwise liquidated its XRP, worth $9.3 million, following news of the SEC’s lawsuit. “The Fund liquidated its position and reinvested the proceeds in other portfolio assets,” Bitwise wrote to clients.