Litecoin’s Charlie Lee revealed a while ago that he would speak at the Slush 2018 event in Helsinki on December 6th and he did talk there about the HTC Exodus 1 phone that has just integrated Litecoin (LTC) and Bitcoin (BTC).

Lee has always envisioned cryptos to become to go-to ones, and he hoped that his creation, LTC will be able to have cheaper fees and faster transactions as well.

At the event, Lee spoke to HTC’s Decentralized Chief Officer Phill Chen, and he announced that HTC Exodus 1 would support LTC and more cryptos.

The early access to the phone will have an option to buy it with LTC, BTC or ETH via the official website.

The phone also comes with a new storage method that uses social key recovery mechanism if the device is lost or stolen.

Zion is an integrated wallet that comes with the phone, and it can store Bitcoin, Litecoin, Ethereum and ERC-20, and ERC-721 coins. 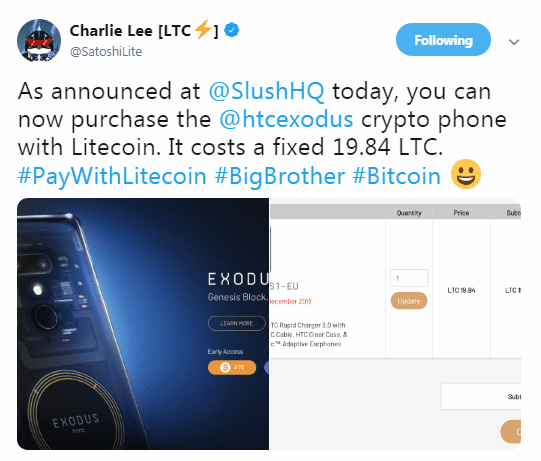 Charlie Lee becomes a consultant with the HTX Exodus 1 team

Lee also joins the HTC Exodus team where he’ll be a consultant. He said, “I’m happy that the much awaited HTC ‘EXODUS 1’ can now be purchased with Litecoin.”

He further explained that “Ever since cryptocurrency was created, my vision for Litecoin was always to increase the distribution of the currency and use it a foundation for secure transactions worldwide, with the Exodus 1, project HTC is expanding crypto technology to the mobile phone and doing so in a way that protects user’s information and wallets.”

Phil Chen stated that the phone’s users would be able to enjoy complete control over their private keys.

He also said that the full ownership of their keys enacts true decentralization which is a crucial step towards maximum protection.

Chen concluded by saying that this is a stepping stone to how people carry their own digital IDs in their pockets, “in the very way we carry phones today.”