As with any communication from Tether these days, a letter from Bahamas-based Deltec Bank has seemingly been parsed as closely as a passage from holy writ.

Commentators on Twitter and elsewhere picked apart every one of its fewer-than-100 words, including the non-committal wisp of a signature – which inevitably became a meme and the subject of parody – and even the document’s metadata.

In releasing the letter this week, the controversial stablecoin issuer was trying to allay concerns about its banking situation by confirming its previously rumored relationship with Deltec and showing proof that it has enough money to fully back the tether (USDT) tokens in circulation.

That exceeds the circulating supply of tether, which is currently 1,776,421,736 USDT, according to CoinMarketCap, apparently indicating that the company is complying with its promise to hold one dollar for every tether in circulation.

But aspects of the letter attracted scrutiny from the crypto commentariat, some of whom have long harbored suspicions about Tether’s claims to fully collateralize USDT. Not helping to clarify matters, when reached by CoinDesk Friday, a Deltec spokesperson would neither confirm nor deny the relationship or the authenticity of the letter, citing legal and regulatory restrictions.

“You contacted us a couple of weeks ago and asked a confirmation that we could not give you, as restricted by law. But Tether came public with an announcement and I wanted to make sure you saw it. Sorry we could not be more helpful before: As you know the banking sector is strongly regulated and we have to be careful in matter of communication.”

So CoinDesk spoke to several industry lawyers to find out what, if anything, can be drawn from Deltec’s brief and cryptic missive.

This sentence from the letter in particular raised eyebrows:

“This letter is provided without any liability, however arising, on the part of Deltec Bank & Trust Limited, its officers, directors, employees and shareholders, and is solely based on the information currently in our possession.”

Preston Byrne, a technology consultant with Tomram LLC (and author of the marmot parody cited above), said that the disclaimer calls back to Hedley Byrne & Co. Ltd. v. Heller & Partners Ltd., a U.K. legal case from the 1960s.

In the case, the House of Lords ruled that a bank which made a similar disclaimer could not be held responsible for actions taken as a result of a letter it sent.

“The Bahamas is a common law jurisdiction,” which means it may “give persuasive weight to English precedent,” Byrne explained, adding:

In other words, there is case law precedent for what one entity might owe another.

“Is the case relevant? To an extent, but the bank does not have a fiduciary relationship with anyone but Tether,” said Matthew Gertler, an attorney who recently joined Reserve, the issuer of a rival stablecoin.

While Tether’s decision to publish the letter might indicate that it’s for public consumption, then, readers should not assume they’ve been given any sort of legally meaningful guarantee of anything, since they’re extraneous to the Deltec-Tether relationship.

Speculation also centered on that fact that there is no person’s name attached to the letter, and that the signature is just a curve. 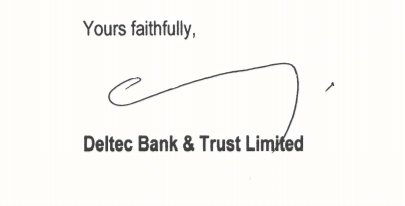 But Gertler argued that the lack of a name or legible signature is not necessarily an issue.

The attorneys CoinDesk spoke to also stressed the importance, from a legal perspective, of the letter’s intended audience, who likely did not require an individual’s name.

“The letter is written to Tether for Tether,” Gertler said. “The bank is basically saying that if it is wrong and Tether suffers a loss, Tether cannot sue the bank. I should note that anyone else who relies on the bank letter cannot go after the bank because the letter is for Tether and no one else.”

The language of the letter covers it “in case there was a system or other error that caused the amount to be misstated,” he said, adding,

Another focus of social media exegesis was the phrase “portfolio cash value.” To some, that appeared to an artful way of saying that the firm is not strictly complying with the language in its white paper, which says:

“Each tether unit issued into circulation is backed in a one­-to­-one ratio (i.e. one Tether USDT is one US dollar) by the corresponding fiat currency unit held in deposit by Hong Kong based Tether Limited.”

(It did not escape notice that the letter was addressed to an office in Taiwan, not Hong Kong.)

As one user pointed out, “portfolio cash value” potentially leaves room for assets that aren’t U.S. dollars – perhaps even cryptocurrencies.

An attorney who spoke to CoinDesk on condition of anonymity, citing “onslaughts of spam and other negative reactions” suffered by those who criticize Tether publicly, addressed this point:

“Regardless of whether I’m a purchaser or investor, who in their right mind would rely on this letter anyway? […] What people want to know when they buy tether is ‘are there dollars on deposit,’ and this doesn’t say anything about that. It says it has $1.8 billion in its account but it doesn’t have to be in cash. It says ‘portfolio cash value.’ I don’t know what that means.”

The balance could even “be money that was loaned to tether for a day,” the attorney added.

Gertler proposed a more generous interpretation. “More likely, the portfolio is of various fiat currencies or various different bank accounts,” he said. “If it is only USD, the bank letter is probably a form letter that contemplates various fiats and bank accounts.”

Stepping back, as the reigning stablecoin, USDT plays a critical role in the crypto ecosystem, allowing traders to quickly transfer value between exchanges without relying on the traditional banking system.

But Tether has not yet produced a full audit of its bank balances, despite language in the white paper saying, “the corresponding total amount of USD held in our reserves is proved by publishing the bank balance and undergoing periodic audits by professionals.”

An analysis by Friedman LLP issued in September 2017 indicated that Tether had funds in at least U.S. dollars and euros at the time. Friedman was supposed to complete a full audit, but Tether said in January that its relationship with the firm had “dissolved.”

Tether subsequently obtained a report from the law firm Freeh Sporkin & Sullivan, LLP, which said that USDT issuance was fully backed by bank deposits as of June 1, though like the Friedman report and the Deltec letter it was rife with qualifications.

From that time until Thursday – nearly five months – Tether provided no evidence that it held a dollar in bank deposits for every tether in circulation. During the month of October, the market capitalization of tether fell by nearly 40 percent to $1.74 billion, according to CoinMarketCap, reflecting a steep decline in total supply as Bitfinex – an exchange that shares common ownership and management with the company – sent hundreds of millions of tokens to a Tether-controlled wallet known as the “treasury.”

The declining market cap also partially reflects a fall in tether’s price, which has rarely reached its $1.00 target in the past month, and is currently at $0.97997, according to CoinMarketCap.

Whatever your interpretation of the Deltec letter, it clearly has not put doubts to rest.