Earlier this week, Justin Sun announced on Twitter that TRON has partnered with Neoworld. He went on to explain how the partnership would work out in the 3D virtual reality world that has been designed by NeoWorld. Here is the tweet that the TRON boss sent out… 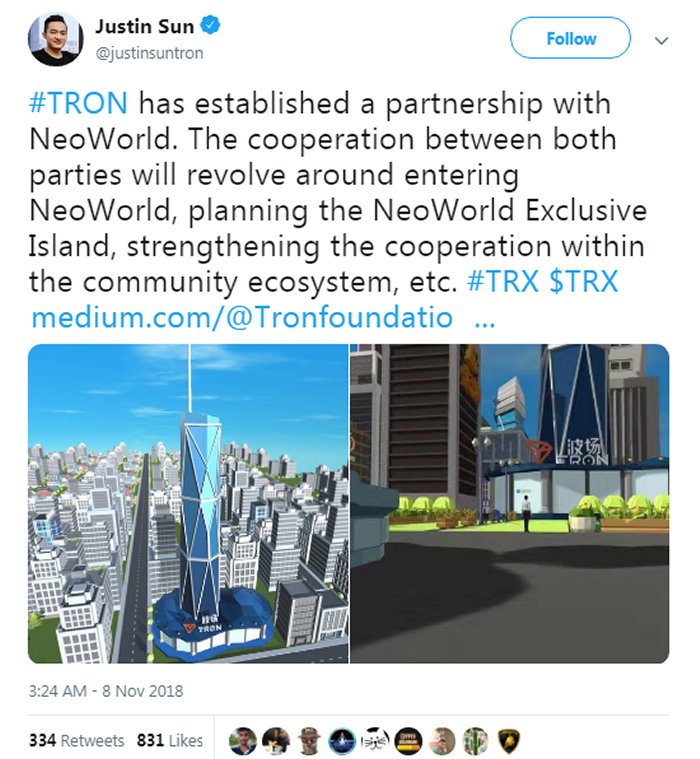 NeoWorld is an online virtual reality world that runs on  blockchain technology. It allows multiple players the chance to create skylines, build wealth, explore new frontiers, pursue careers, and many other characteristics of the real world we live in. Players can establish personal and professional networks using the “chat” option, too.

In addition, players can construct buildings, walk around and purchase land parcels in the virtual world. Currently, there are over 7.5 million buildings constructed, 100k land parcels that have been sold, and 1.3 million jobs are done per day on NeoWorld.

TRON has also built a building in the three-dimensional world as well, which currently ranks among the top in NeoWorld due to its working rewards and heights. The possible use of TRX in the virtual world could be that the token is used to buy and sell buildings as well as land. The partnership between Neoworld and TRON certainly seems to point to that as a possibility.

Currently, NeoWorld Cash (NASH) is the only virtual currency being used in NeoWorld, which according to the white paper, is an Ethereum based token on ERC223. Don’t be surprised if that changes soon, though.