After a year of gains and record highs, cryptocurrencies are going through a turbulent time, and the market is in extreme fear territory. Why is this not surprising? There have been several major events we need to chew on.

It took the Chinese government several years to limit the use of digital currencies, but its most recent crackdown outlawed all crypto transactions and mining within the country.

Fresh regulations from China have taken aim at ICOs, block exchanges and speculation. In a latest move to restrict cryptos, China has ordered the shutdown of Bitcoin mining in its Sichuan province, as well as telling banks to stop supporting crypto transactions. The country’s central bank has outlawed all cryptocurrency transactions.

Chinese authorities are cracking down on technology as part of a larger conflict between public and private power. In 2022, regulators will likely continue enforcement activities, supporting President Xi Jinping’s goal of promoting common prosperity.

However, in spite of being banned by the entire nation, Bitcoin mining seems to have survived its greatest stress test ever.

China’s exiled miners flocked to Kazakhstan, a country that welcomed them with open arms, having invested hundreds of millions of dollars in crypto mining since 2019. The Kazakhstan government hoped that its cheap and abundant coal power – essential for mining – will attract the industry and generate a new revenue stream.

According to the Cambridge Centre for Alternative Finance, Kazakhstan became the world’s second largest country for crypto mining after China clamped down on the industry in 2021.

According to the Cambridge Bitcoin Electricity Consumption Index (CBECI), the country accounted for 18.1% of the total global Bitcoin mining hash rate distribution as of August 2021. Only the US was a bigger contributor. 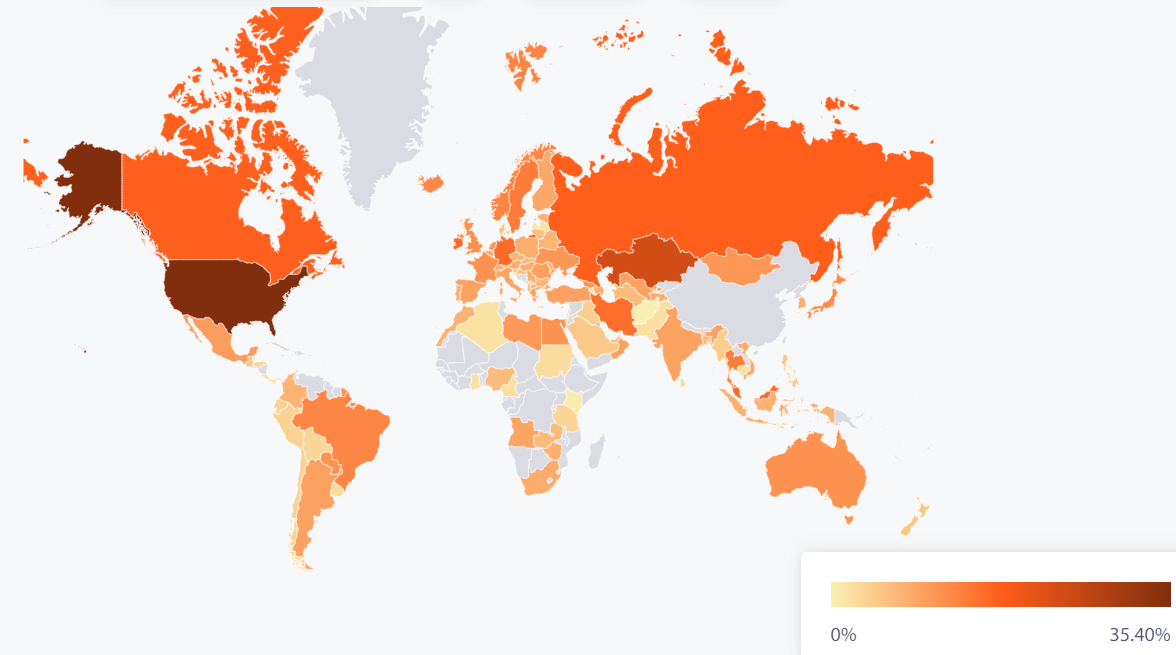 The internet in Kazakhstan was shut down during the uprising that started on 2 January, causing Bitcoin’s computing power to plummet. Within hours of the outage, The Block’s Larry Cermak tweeted that 12% of Bitcoin’s worldwide computation power was gone.

As of now, the country’s internet connection has been mostly restored, so the hashrate has returned to normal.

Along with the drawdown in cryptocurrency prices, we have also seen a rise in the supply of stablecoins. Relationship between BTC and stablecoins give insight into who currently has more weight:

Stablecoins Supply Ratio (SSR) chart shows the lowest value since July 2021, meaning high stablecoin supply compared to the market cap of Bitcoin and indicating that investors are turning to them as a hedge against volatility.

The current drawdown is taken seriously by most crypto investors and is seen to continue in the near-term and short-term, however nothing like 2018 seems to be the trend. At this point, I don’t expect a yearlong correction.

For the first time since September, the BTC price fell below $40,000 on Monday. It’s currently trading at around $42,697, down 0.8% for the past 24 hours. As I mentioned in my previous article, the critical support line is at $31K — if the price breaks below that level, then we can speak about the bear market, otherwise we’re witnessing a correction and there’s nothing to worry about.

The reality of the situation is that, while it’s hard to hear right now, adverse market conditions like the current ones are what help make big gains in the crypto market. Buying tops does nothing to help your profits grow.

Don’t let your emotions interfere with your investment decisions. Many people fall into the trap of waiting for the ideal top that they never take action and never sell. The goal is not to catch the top perfectly, but rather to get the gist of the move. There’s never a reason to be afraid to take profits from your positions. Just some food for thought and preliminary research.

And finally, you might not be so concerned about the current Bitcoin’s fall if you shift your focus to the fact that it has skyrocketed more than 4,500% over the past five years.

P.S. NB! This article has originally been published on Cointelegraph.