Crypto Proves Resilient as Global Uncertainty Surrounds. A Look at the Worst-Performing Coins Under $1

World markets, including the crypto market, are rife with crazy uncertainties. Despite Bitcoin’s technically falling, it is not in a downward spiral like some other traditional assets, as strong fundamentals are backing it up, rather than traditional assets. Over the past seven days, Bitcoin has still gained 6.4%. Most notable is the fact that BTC shows decoupling from the S&P index; the correlation index is currently 0.42 as compared to 0.67 in January.

The Future of Crypto in Russia

As global concerns grow over whether Russia can evade sanctions through crypto, experts say that it would be a nearly impossible alternative as the $2 trillion crypto market is too small for the Russian state to meet its financing needs. If an oligarch attempts to move crypto worth several billion dollars, on-ramps and off-ramps in the industry will notice it.

Ukraine’s deputy prime minister called on major crypto exchanges to block all Russians from their platforms to “sabotage ordinary users.” Exchanges declined the request, saying that freezing access to digital assets of citizens from an entire country would not punish those involved.

According to TripleA, a Singapore-based crypto-payments company, more than 17 million Russians own cryptocurrency. Given the economic and ruble crisis that Russia is experiencing, I believe that even more of its citizens who bear no direct personal responsibility for its government’s recent actions will begin using cryptocurrency. Leaving politics aside, if we look at crypto adoption and humanity, this is a good thing.

Meanwhile, governments are raising concerns about crypto regulation while crypto platforms claim they comply with sanctions and already follow the same guidelines as traditional financial institutions.

There are many crypto advocates who point to the global fundraising campaign for Ukraine as proof that the technology has the potential to unite the world, calling on US policymakers to be cautious when drafting rules for the industry.

Politico Pro reported that the US Internal Revenue Service (IRS) is considering sending more John Doe summonses to crypto exchanges as it expands its scrutiny of digital assets.

The IRS previously obtained information on crypto users who have unreported holdings through information requests.

In Britain, the Financial Conduct Authority (FCA) opened over 300 cases involving possible crypto asset businesses not registered with the authority over the past six months, “many of which may be scams,” the watchdog said.

It is possible to find opportunities in the crypto market with new promising cryptocurrencies if you find them before they become very popular. There are, however, a lot of them that are just worthless, so investors need to be cautious. Listed below are my top 4 worst-performing coins worth below $1 and my overview of their potential.

Glitzkoin aims to create a global exchange bridging the gap between the traditional diamond industry and cryptocurrencies-based innovative financial markets.

The GTN token is to be used as the means of payment on its upcoming DiaEx platform instead of cumbersome and expensive banking procedures.

The project’s founders claimed they were going to launch the trading platform since creation, but this hasn’t happened so far. The rollout is scheduled for 2022, according to the website. Time will tell if it is launched or postponed again.

It has, however, some activity. The project recently became an official payment partner with Myticket.asia, an online ticketing portal that will now accept GTN tokens for making ticket purchases.

Glitzkoin financed the food distribution program in Thailand for 50,000 needy Thais – humanitarian assistance is always a good thing to do. A little over 1,000 Twitter followers and 0.83K Telegram users make up the project’s community.

However, because of its price swings are extreme even for crypto, like $1,000% ups and downs within hours, I would recommend to stay away from it.

The first blockchain-based MMORPG in virtual reality with realistic graphics, Victoria VR is created and owned by its users. Victoria VR aims to create a new metaverse of rich multi-dimensional experiences. Victoria VR’s network is designed to be a platform that connects virtual worlds, games, and apps, creating a shared virtual realm — a 3D internet — across the globe. Victoria VR Metaverse will be a place where people can work, rest, learn, play, and live.

In January, Victoria VR announced a partnership with Dell to boost its metaverse development efforts.

It has a huge following of 90K on Twitter, making it one of the largest crypto communities. All in all, it still seems to be a promising token and the decline is caused by severe market conditions across the board and not by its failure as a project.

Aleph.im already supports a number of leading blockchain platforms, including Ethereum, Polkadot, Cosmos, BinanceChain, and others. Any project built on these platforms can connect to its decentralized database and storage system.

There is also a channel mechanism that allows sharding with subnetworks with all the features of the Aleph.im network.

The ALEPH Token is a utility token that can be staked, rewarded, and used to pay for storage, computing, and synchronization services.

There is a growing Twitter community of 53.18K followers, so the project is gaining popularity.

ALEPH is currently priced at $0.309057 with a market capitalization of $59.688,383. Over the past week, it lost 17.4% of its value and 43% on a monthly basis. This isn’t a huge loss in the context of the cryptocurrency market. As such, I wish good luck to the project, as it offers DeFi the opportunity to grow and improve with it. 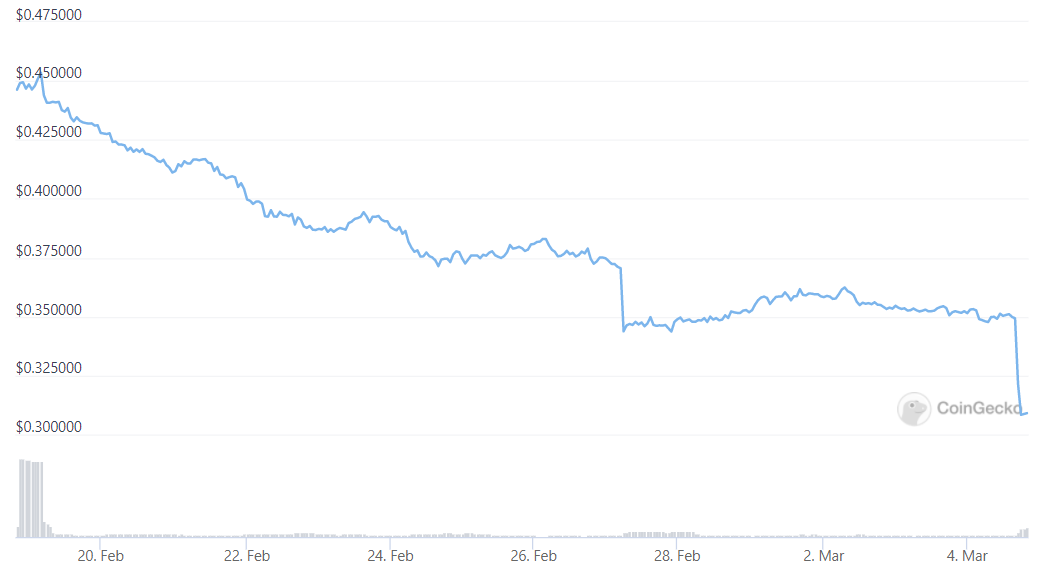 Blockv is the shared protocol for blockchain developers. Usingit, developers can create new revenue generating opportunities for businesses and design the experiential economy of the future. BLOCKv’s platform enables the creation of smart digital objects on blockchains, enabling rapid engagement and collaboration between end users across real and digital environments. The smart objects, called vAtoms (Virtual Atoms), combine code with multimedia elements and are dynamic, compelling digital goods, which bring digital currencies to life as an asset for developers, brands and users alike.

While the token is trending downward, the project offers a solid technology opportunity for blockchain development, so these might just be volatility swings.

Russian Crypto Assets to Be Frozen by Historically Neutral Switzerland

Blockchain Technology May Contribute Around $2 Trillion to the Global Economy