The “metaverse” term is often attributed to Neal Stephenson’s 1992 novel Snow Crash, which depicted lifelike avatars meeting in realistic three-dimensional buildings and other virtual reality environments. The metaverse, however, is far from a science fiction phenomenon. If you’ve ever played a role-playing or life simulation game, you’ve likely been part of the metaverse.

In essence, the metaverse is a virtual world where you can live multiple lives, choose who you want to be, make friends from around the world, and do whatever you like. Virtually anything you can do in reality can be done in the metaverse.

There have been mixed reactions to it, but the reality is that the metaverse will bring a whole new lifestyle experience to everyone. As evidenced by Facebook’s decision to rebrand as Meta in October, the idea of a centralized virtual world paralleling the physical one has burst into the mainstream scene.

Morgan Stanley estimates that the metaverse could be worth $8 trillion and be the “next generation social media, streaming and gaming platform”. According to reports, wearables and gadgets in the metaverse will be worth $100 billion in 2030 and increase fivefold by 2040.

The concept of digital ownership has surged in popularity over the past few months, and the technology that is seen to secure persistent digital experiences has become an increasingly hot topic, with non-fungible tokens (NFTs) and metaverse cryptocurrencies gaining traction.

It’s crucial to keep an eye on Bitcoin and other major cryptocurrencies’ price movements, as most altcoin prices are influenced by them. This will give you a clearer picture of the crypto market.

In November, the price of Bitcoin has been declining to post a 7.2% monthly loss amid renewed fears over new virus variants, a trend that has occurred for most of the month.

Currently, BTC is showing some signs of recovery, posting a 1% gain for the past seven days. However, the price is still about 17% away from its all-time high of $69,044.77 hit on Nov 10th. Some reports have even described it as a bear market. In reality, the current market correction is the least severe in 2021. The sell-offs of January, February, and April all reached as much as -24.2% from the ATH and then price reversed. There was a major drawdown in the market from May to July, where it plunged by 54%. 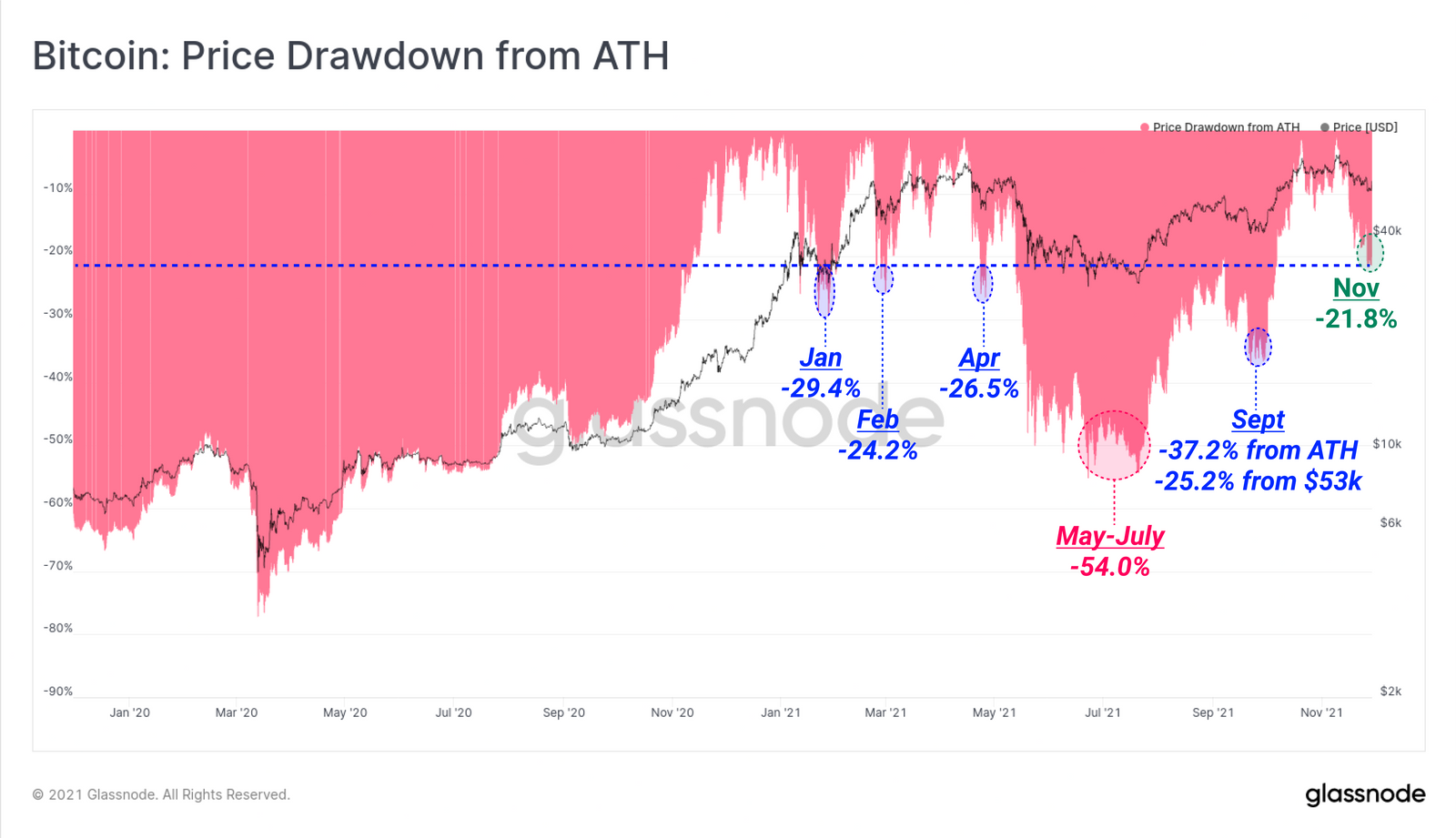 My opinion, as I mentioned in the previous article, is that $60,000 is the next level of resistance for Bitcoin. The BTC price is likely to climb higher and faster after breaking through it. The flagship cryptocurrency last traded at $57,004, almost unchanged over the past 24 hours.

Meanwhile, ETH is clearly gaining momentum and is about to surpass its all-time high of $4,878.26 it reached on November 10th after Denver-based investment firm Kelly Strategic Management filed for approval to list an Ether futures exchange-traded fund. For the month of November, ETH gained 9.54%. At last check, the second-largest crypto by market cap traded at $4,699.89, up by 3.11% over the past 24 hours.

Cryptos can’t be predicted with any certainty, since most of the hype comes from online activity. However, if you invest in a coin only based on its high levels of hype, you’re basically gambling your money. If a crypto doesn’t have a potential technological advance for long-term adoption, traders won’t rush into it. Since metaverse cryptocurrencies have both hype and a forward-thinking basis, they stand a good chance of taking off.

In the metaverse, there are a lot of new coins emerging rapidly. Over the past week, the metaverse coins listed below have gained solidly, and it looks like the uptrend might continue, making them likely to become the next big thing.

To me, these tokens are very cool and have been on my radar for quite a while. However, they remain high-risk investments, so do not invest more than you can afford to lose. And be cautious about blindly trusting me on this – make sure you do your own research about the technology and the risks involved.

DefiDegenLand (DDL) is the native currency used by the same-name metaverse project which focused on Gamified DeFi and rewarding the holders with Bitcoin. It is used for buying in-game goods/NFTs, voting for the future of the DDL Metaverse, and earning rewards.

It made a staggering weekly gain of 465%, making it the best-performing metaverse token for the past seven days.

The Neos Credit is the official cryptocurrency of the Neos Metaverse used for value transfer between users and world creators. NCR will also support Neos Jobs and Neos Store, when they are implemented.

With a weekly gain of 75%, SMON was the fourth biggest gainer during the past week. Star Monster Metaverse is a 3D play-to-earn game based on BSC. Starmon Metaverse builds a virtual world where players can earn tokens through games and contributions to the ecosystem. Over the past 30 days, it has gained 81.6%. SMON last traded at $8.96, up by 40% in a day. It briefly reached its all-time high of $9.41 on December 1, 2021 and continued its rally.

Jade Currency is a BEP-20 token designed for fast transaction over Binance Smart Chain. It is stakeable across all platforms. The project seeks to change the world by creating the first NFT (non-fungible token) marketplace for precious gems like jade where buyers can purchase them using cryptocurrencies.

BTC to Reach $45 trillion in 2021, Doubling the Value of Former Years