BTC Is Set to Rally After a Spike in Volatility. The Top Cryptos Under $2 Billion Market Cap to Watch

It has been a period of low volatility and price consolidation for Bitcoin markets, which has seen trading rise from $40,544 at the start of last week to the highest level of 47,408 briefly hit on March 28 and slightly down to $47,209 as I write. This is a gain of 15% over the past week. 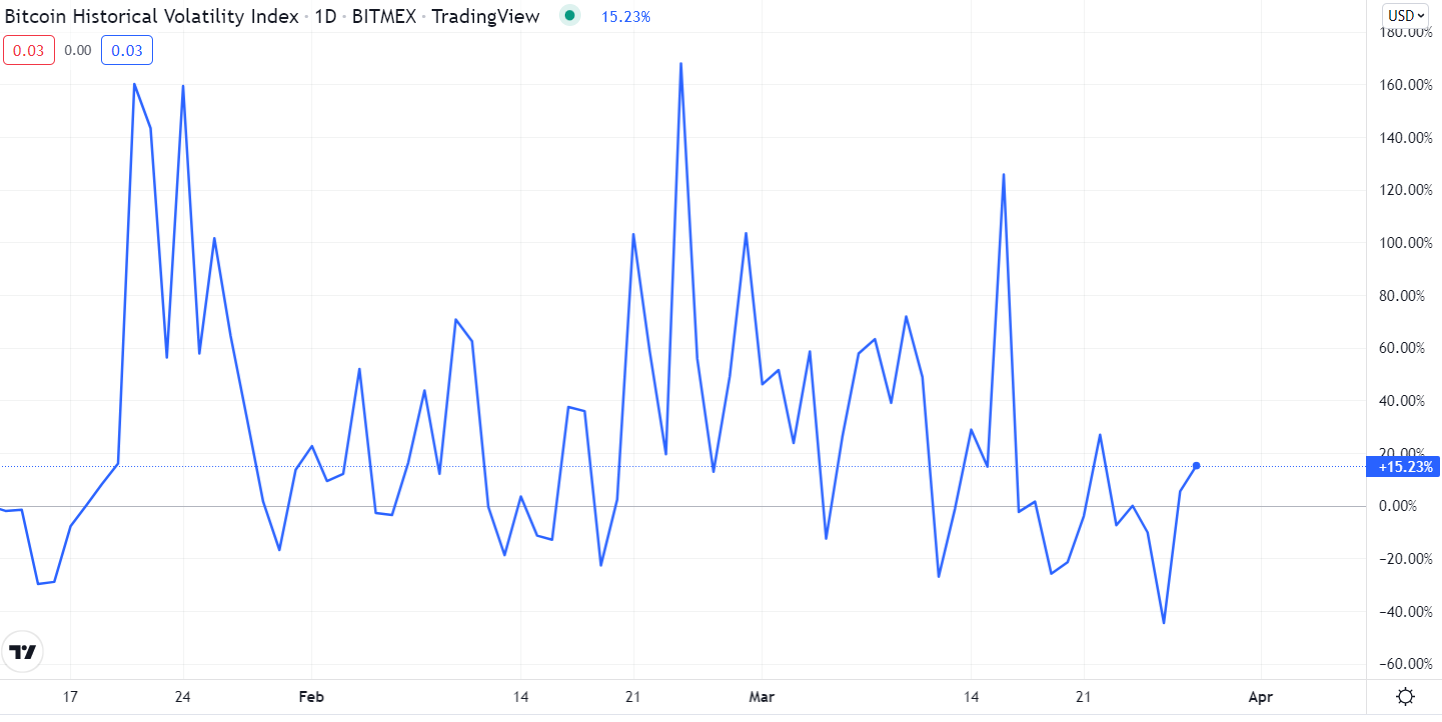 Volatility has been squeezed out of the market as prices move within narrow ranges, reaching its lowest level on March 26th, and is currently on the rise again, so the likelihood of a spike in volatility is possible in the near future. This, however, may not negatively impact Bitcoin’s price, as it may catapult it to new heights.

In the meantime, there is a decrease in USDT unique addresses that are active in the network, which is generally taken as a sign of upcoming bullish rally in BTC.

Previously, I predicted the BTC correction that followed after November’s ATH could be compared to the consolidation phase we saw from May to July of 2021 and that the weakness would last until near the end of February based on the technical analysis. As it turned out, this was true even though there were strong fundamentals like the war in Ukraine that could have prevented it.

I also rejected the hysteria over the crypto bear market that was rampant at the time. As I mentioned, it could only happen if the Bitcoin price falls below the 31-30K support line for at least a week. It didn’t, so the assumption was also correct.

A technical analysis that I provided in early February that predicted Bitcoin would rally above $73,000 by late May or early June has been revised a bit. The current chart indicates BTC will rise above $72K in mid-May before descending into the next correction phase. It will be interesting to see if that happens. 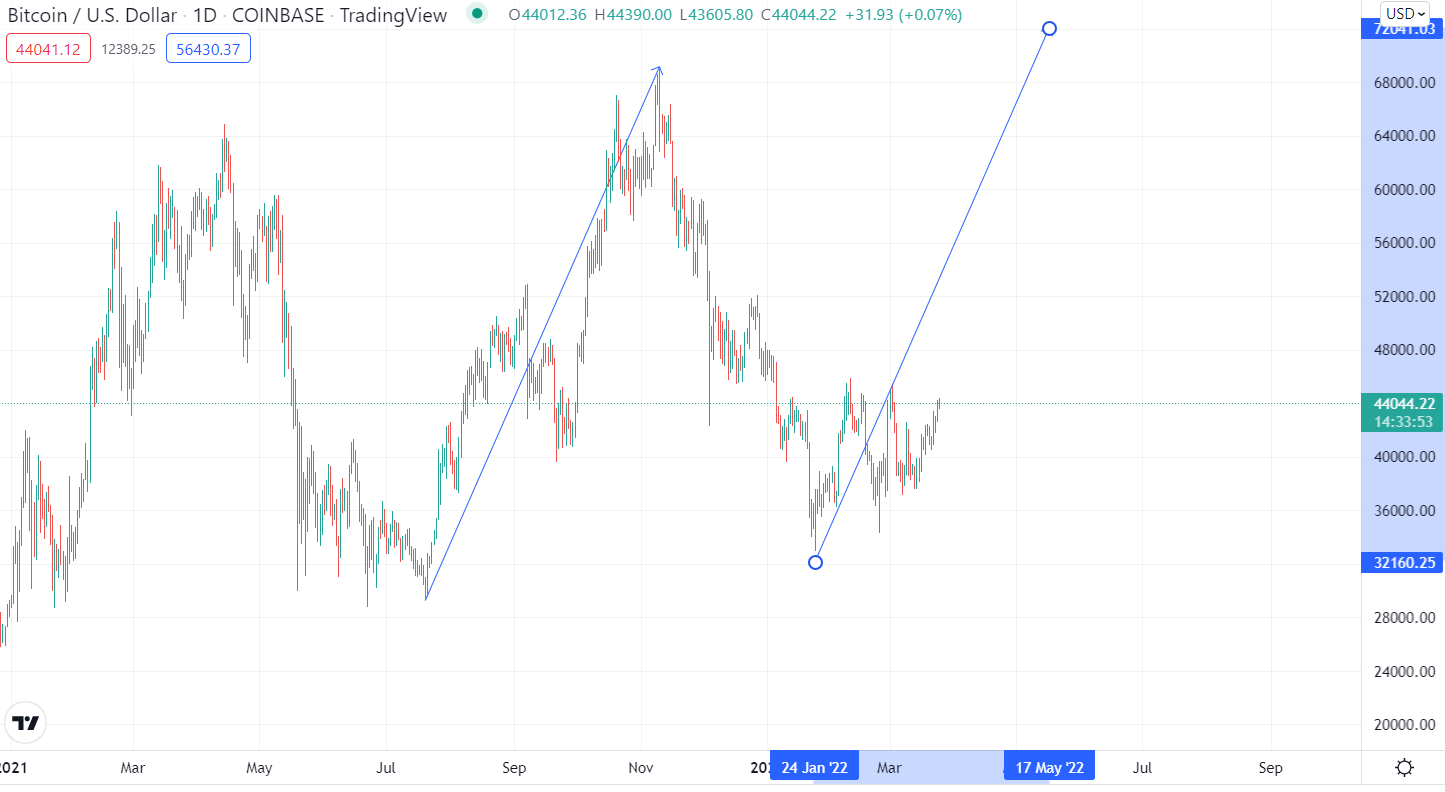 In my opinion, however, this will not happen slowly, but rather as a result of a volatility leap that is brewing right now.

Nevertheless, I keep saying that there are always unforseen fundamental factors that need to be considered.

Below are my picks for the best-performing cryptos with market capitalization under $2 billion that are not in CoinMarketCap’s Top 50.

Zilliqa’s ZIL token, currently trading at $0.115, has risen significantly after the blockchain startup announced its partnership with global talent award app Agora, sending ZIL to the top with its 167% week-to-week gain.

Zilliqa’s Metaverse as a Service platform Metapolis teaming up with Agora has been welcomed by investors.

According to Zilliqa, it is the world’s first public blockchain to rely entirely on a shared network, allowing for high speeds and high transaction rates, which it claims solves the scalability issue. The Zilliqa blockchain technology can be used extensively by the advertising, gaming, entertainment, financial services, and payments industries. 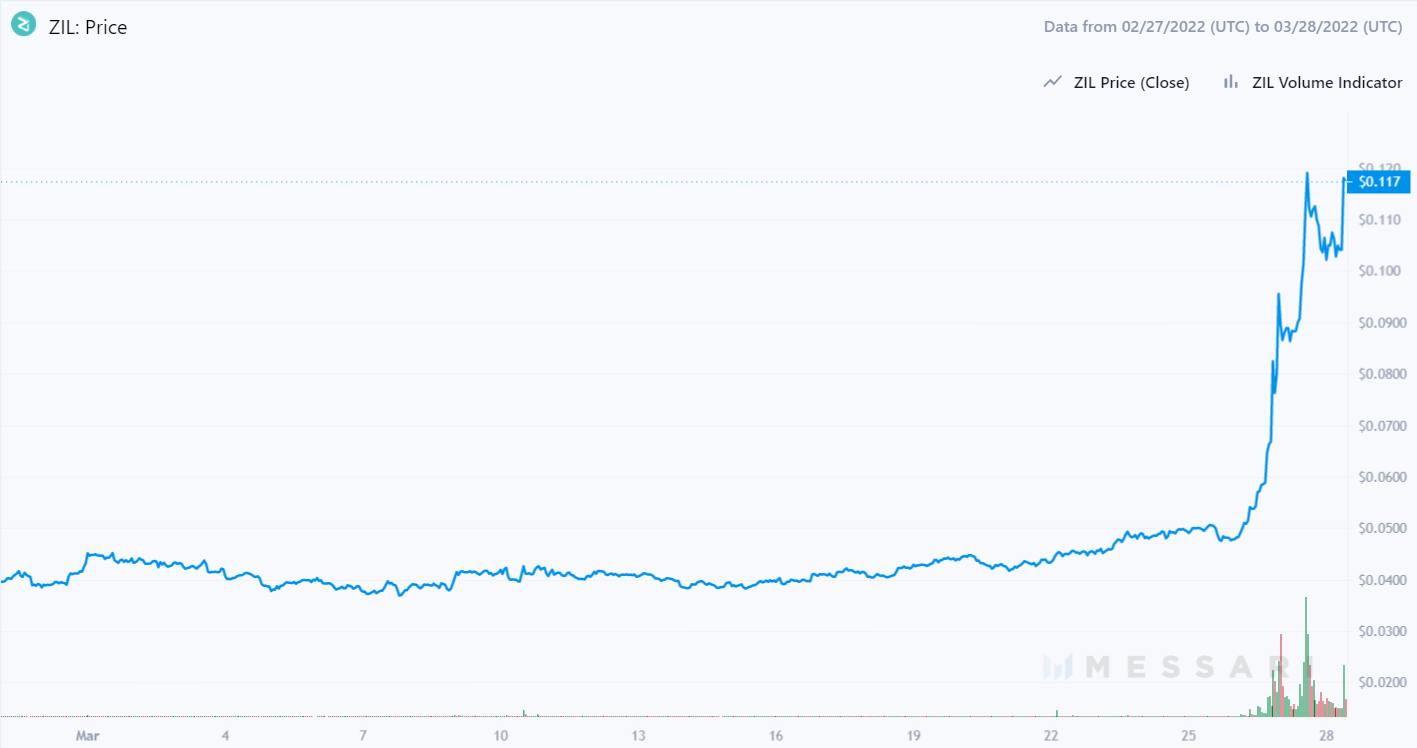 Holo is a peer-to-peer distributed platform for hosting decentralized applications built with Holochain, a framework for developing Dapps without the use of blockchain technology.  It is a bridge between the broader internet and apps that operate on Holochain.  It offers several innovations that it says will promote a paradigm shift in crypto applications and currencies, including the ability for mainstream users to host P2P apps online. 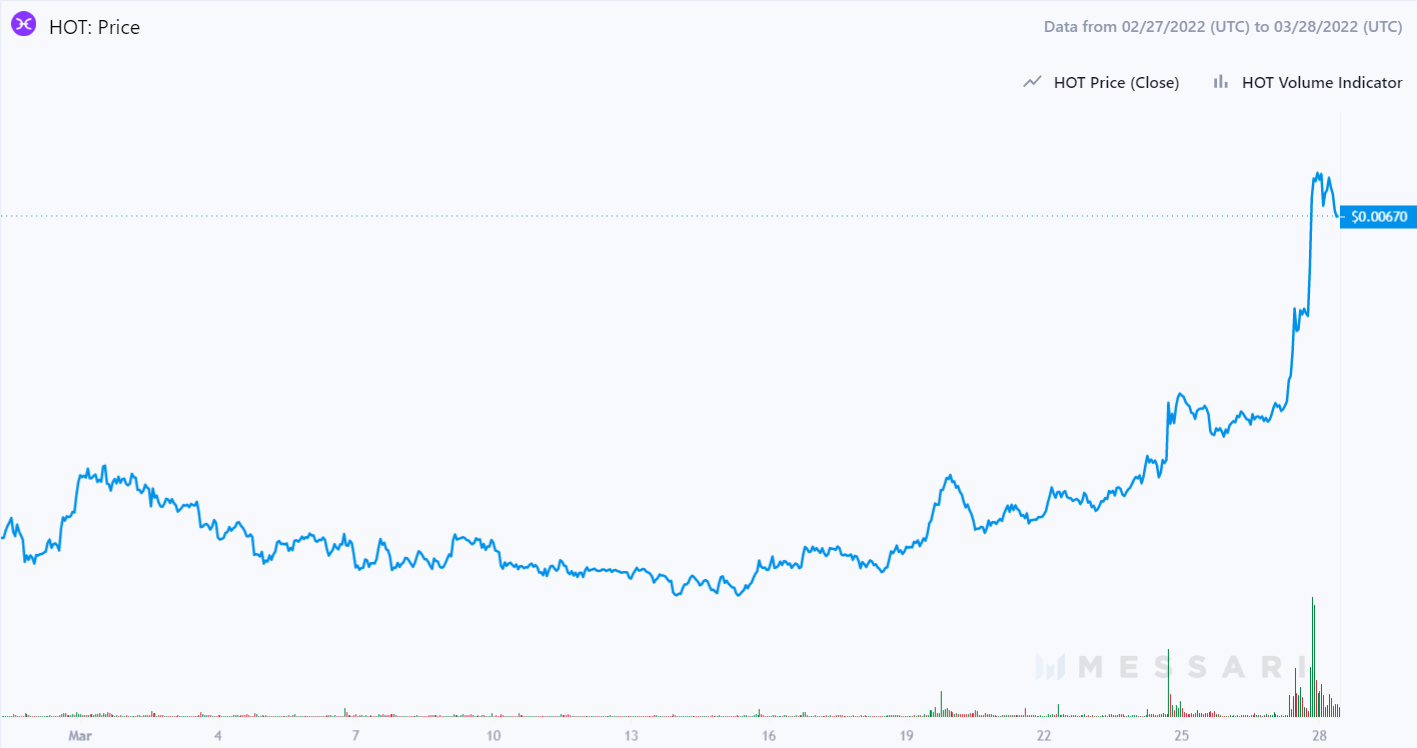 Bitcoin Gold was founded in 2017 to become a user-friendly Bitcoin alternative. BTG combines the security and sturdiness of the Bitcoin blockchain with opportunities for experimentation and development.

BTG contributes to the crypto space by creating a blockchain that is closely compatible with Bitcoin, but is not dependent on bitcoin hash power or competing with Bitcoin itself. The company aims to provide a coin with bitcoin-like functionality, but with a strong focus on DApps and DeFi developers. 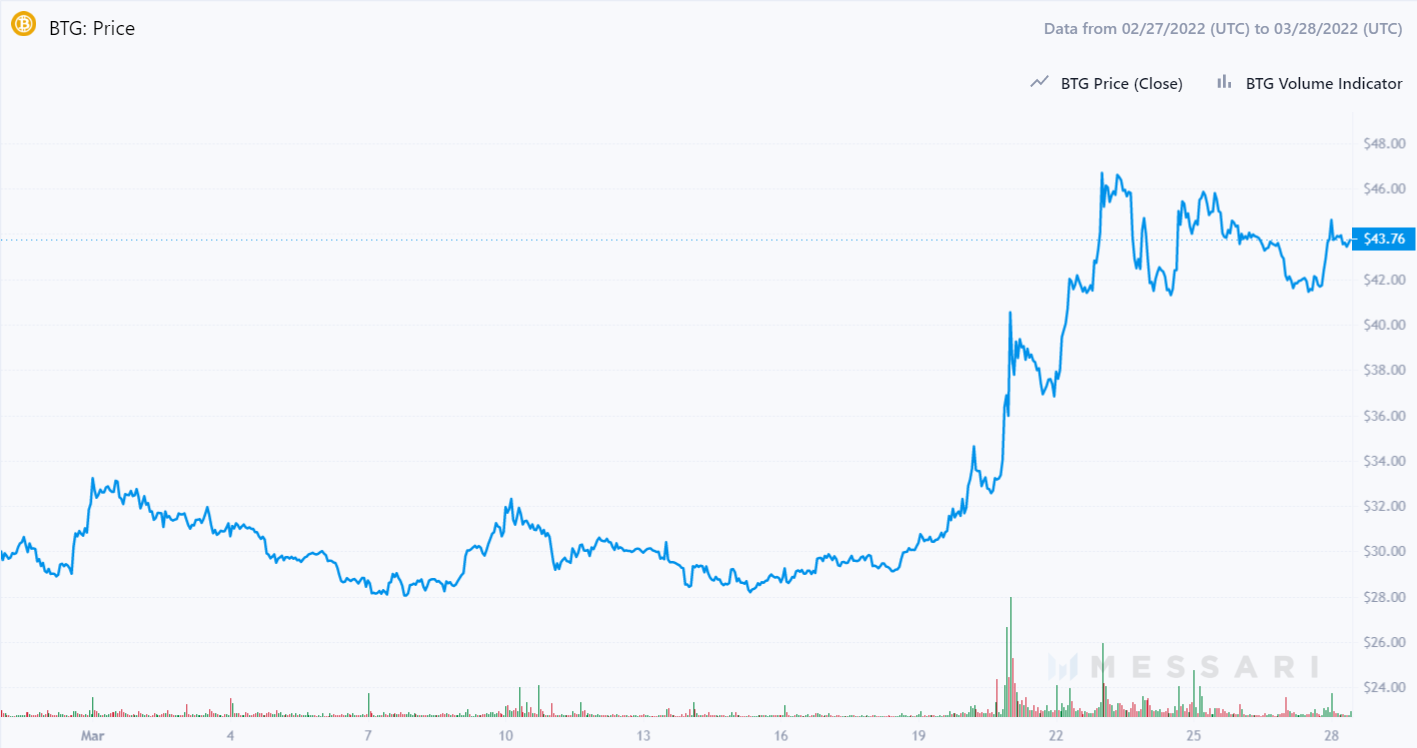 Over the past week, LRC increased almost 43%, with its price skyrocketing after news of its integration with GameStop for their upcoming NFT marketplace. By building their NFT marketplace on top of the Loopring L2, GameStop will offer users the ability to mint and trade NFTs at a fraction of the cost of transacting on the Ethereum mainnet, while maintaining the security it offers. 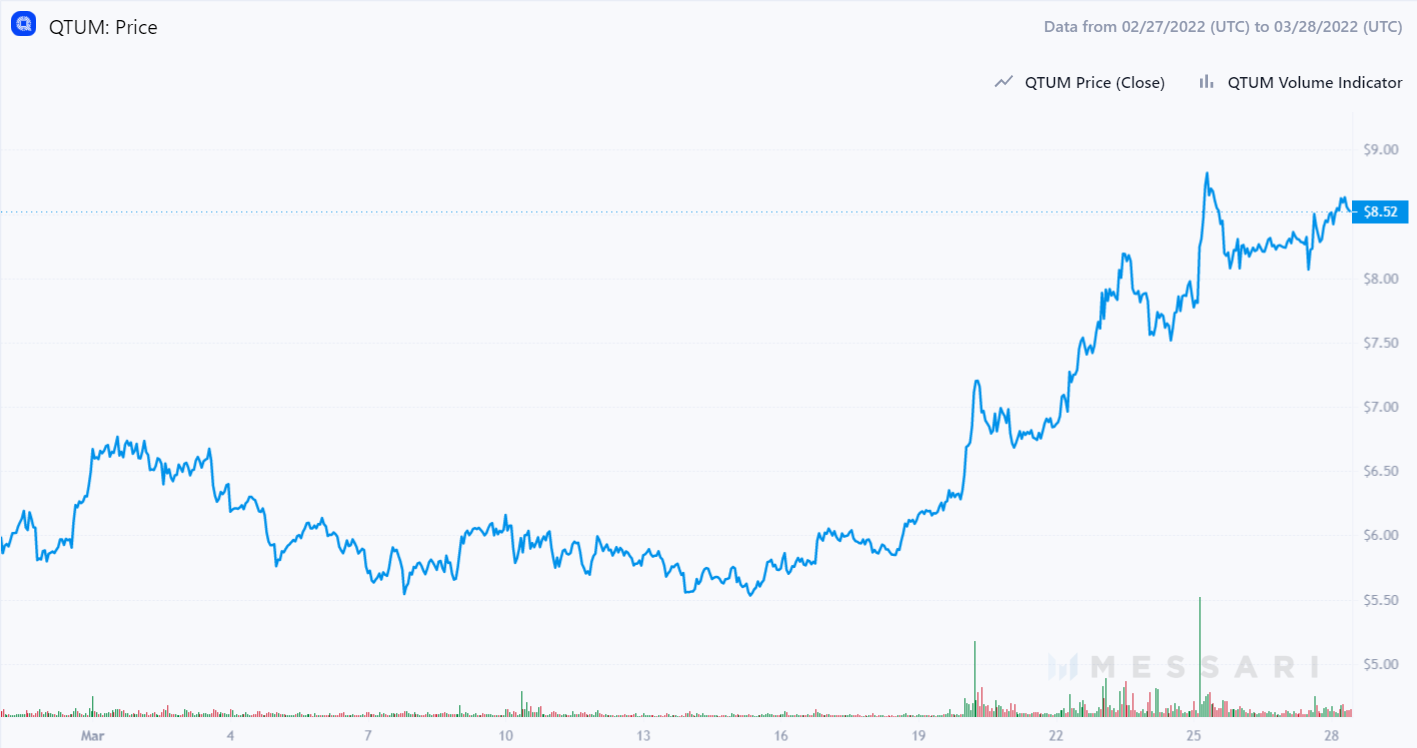 Qtum (pronounced “quantum”) is a scalability-oriented proof-of-stake smart contract platform and value transfer protocol. It integrates the strengths of both Bitcoin and Ethereum in one chain. Qtum is based on Bitcoin’s UTXO transaction model and adds the functionality of smart contracts, DApps and DeFi.

Dash has been among the top performing coins over the past seven days, adding more than 10% to its high monthly growth of 45%.

Dash was created in January 2014 as a fork of Litecoin (LTC). It’s an open-source blockchain and cryptocurrency that aims to provide a fast, cheap, decentralized global payment network.

It claims to be the easiest-to-use, most scalable payment-focused cryptocurrency on the market. Dash’s proposal system is governed by a network of masternodes, which are servers backed by collateral in Dash. Masternodes provide a layer of services to the network in exchange for a portion of the block rewards. Among their features are InstantSend, PrivateSend, and ChainLocks.

In comparison to Bitcoin, it rose 21% over the past month. The performance year over year is negative, however: -34% against the greenback and -23% against Bitcoin. 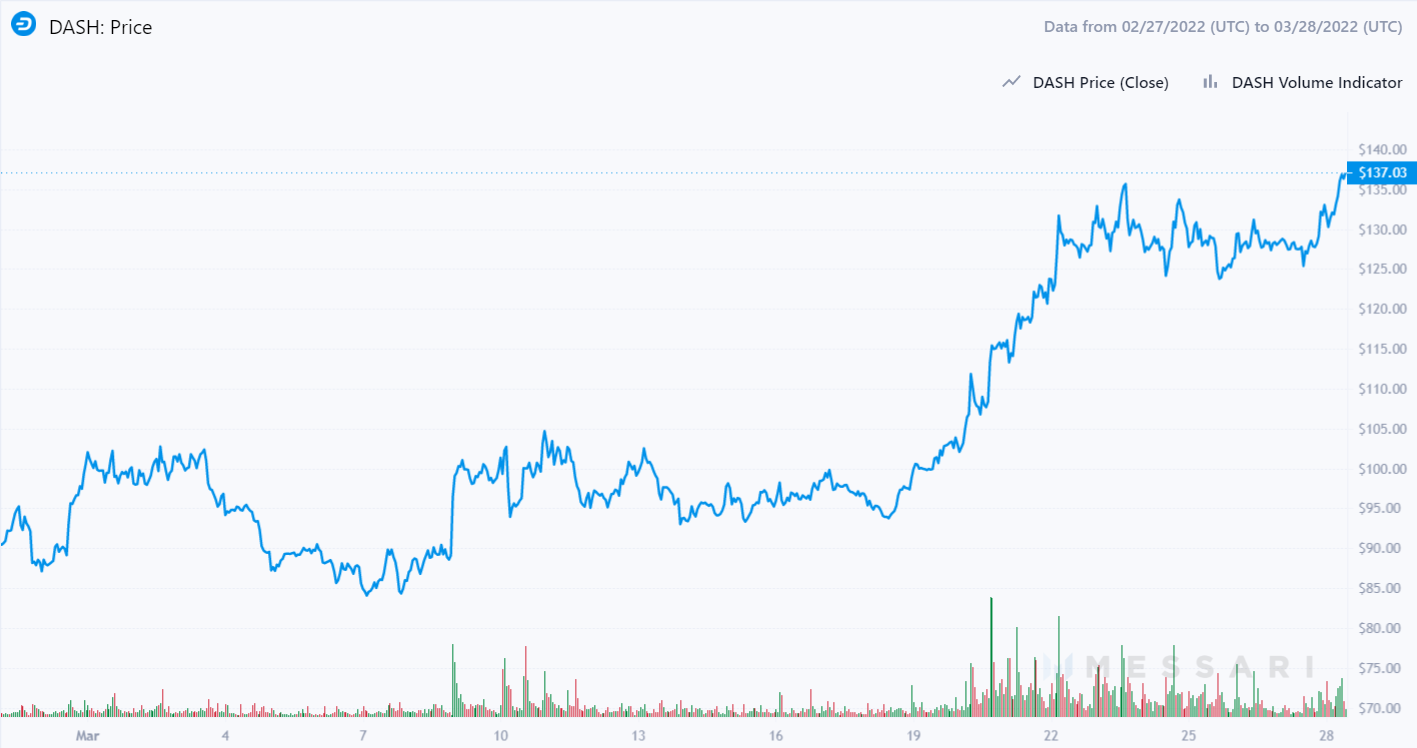