The crypto market has been remarkably challenging for investors this year, with BTC and ETH prices currently down about 66% from their ATHs. June was the worst month since 2011 for both assets. There is cause for optimism in July, though, as both assets post gains.

Still, this year’s drawdown has actually been the least severe on record.

While this crypto winter has seen a smaller drawdown than previous bear markets, it has seen numerous large capitulations and restructuring of a market.

Bitcoin and Ethereum have been trading below their respective realized prices since mid-June. The average period for dipping below the Realized Price for historical Bitcoin bears has been 180 days, except for March 2020, when it took just seven days.

When we examine MVRV Ratio, which measures the changes in market value (MV, spot price) for three types of Bitcoin cohorts, including a general market, Short-Term Holders, who usually react to market volatility by spending their coins, and Long-Term Holders, who are statistically least likely to spend their coins, we can see that all of them are currently holding coins below their cost basis.

It is common for all three cohorts to be under cost basis at the time of bear market lows. So, Bitcoin may be approaching a potential market bottom. 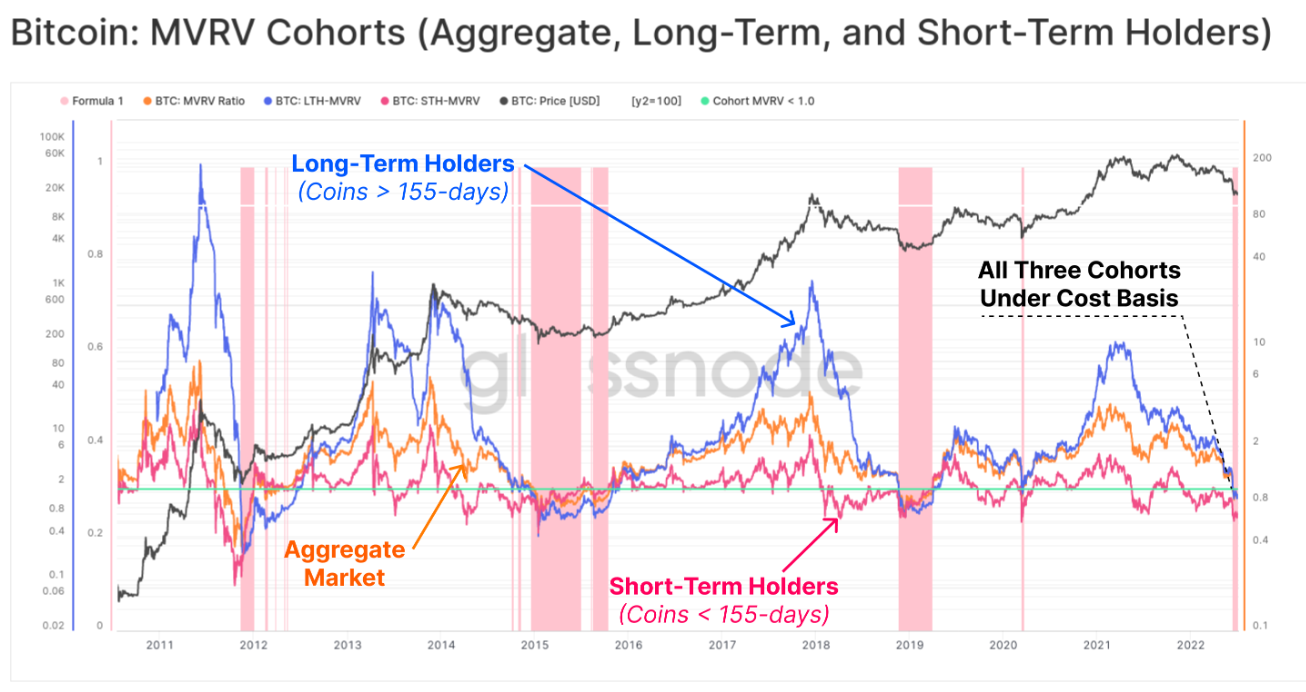 Meanwhile, the macroeconomic environment and concerns about crypto drove venture capital investors to scale back their crypto investments in Q2’22. A 29% decline in the financing of blockchain projects to $6.5 billion in Q2 from $9.2 billion in the first quarter of 2022 marks the first drop in two years.

Startups developing Web3 technology received 57% of that funding, compared with 68% in the previous quarter.

It is fair to conclude that the year 2022 has been a major reset of market expectations, a major deleveraging, and hopefully the start of new foundations that will allow even larger structures to be built upon them.

Ethereum Classiс I mentioned in my previous analysis, added yet another 43.4% over the past seven days. Also covered last week was Lido DAO (LDO), which added another 31.8% gain for this past week.

Among less popular tokens, ROSE,  the native token of Oasis Network, a proof-of-stake blockchain that claims to be highly scalable while supporting confidential smart contracts, gained 64.2% over the past 7 days.

Qtum (QTUM) also performed well over the past week and month, posting gains of 21% and 49.3%, respectively.